By Rob Moss on 3 May 2016 in Tips and gratuities, Department for Business, Energy and Industrial Strategy (BEIS), Minimum wage 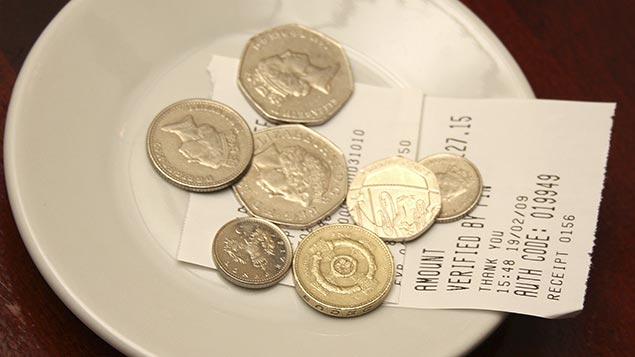 Service charges that are automatically added to bills in restaurants could be a thing of the past under government plans to end unfair restaurant tipping practices and increase transparency for employees and consumers.

Tipping and the national minimum wage

The Department for Business Innovation and Skills (BIS) has launched a consultation that includes proposals to replace the hospitality sector’s current voluntary code of practice on gratuities with statutory regulation.

Business secretary Sajid Javid said he was disappointed by the tipping practices of some high street chains uncovered last year.

Restaurants including Pizza Express and Côte were among many criticised for a lack of transparency and unfair administration fees.

The practices can lead to the withholding some of the money from tips intended for staff.

“Today I’m setting out our proposals to make tipping fairer, clamping down on unfair practices and securing a better deal for the millions of workers in the service industry. We will look closely at all the options, including legislation if necessary.

“Underlying all the proposals is our aim that additional payments for service should be voluntary to the consumer; received in full by workers where appropriate; and transparent to the consumer who makes them.”

The consultation paper reflects evidence received from consumers, workers and employers groups. It includes proposals to:

The call for evidence received nearly 200 responses. Worker groups called for a requirement for 100% of tips to be paid to workers.

The majority of customers would prefer to see all tips either going to the employee (61%) or shared in a “tronc” without any employer control (23%).

Employers were more supportive of retaining the current treatment of discretionary payments for service, and maintaining their flexibility to reward workers but increasing the transparency of actions.

In addition, the Government is considering whether or not to ban or restrict the levying of table sales charges on staff – a fee paid by waiting staff based on their sales during a shift – and how to incentivise well-managed tronc systems.

Unite, which has been fighting since 2008 for fair tips for waiting staff, hailed the news as a “massive, rightful victory” for working people.

Dave Turnbull, the union’s officer for the hospitality sector, said: “This is fantastic news. It has taken us eight months to get this report to conclude but at long last it has and come down on the side of the waiting staff.”

“But it will need the support of law to make this happen,” he added. “It is patently obvious that too many employers do not respect the spirit or word of the voluntary code.”

A recent survey by OpenTable found that 87% of UK customers always leave a tip and that the average percentage of the bill left is 9%.

The Government’s consultation closes on 27 June 2016.