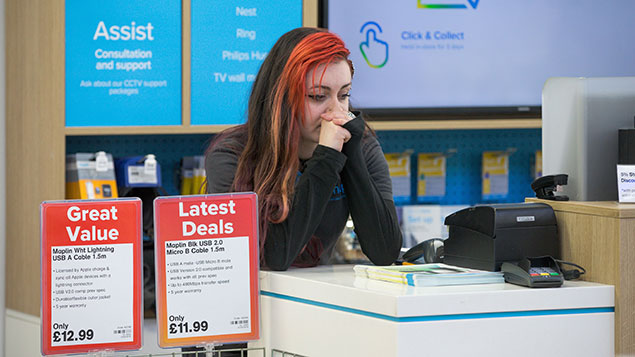 A worker at Maplin, which is closing all stores. Photo: Rex Features

Nearly a fifth of retailers are preparing to shed employees, and more than half do not expect staffing levels to rise, as the high street continues to be affected by the shift in buying habits to online and rising costs.

The latest figures, for the second quarter of 2018, come from the British Retail Consortium (BRC) Retail Employment Monitor, which calculated that the number of people employed in the sector fell by 2.8% in the past three months − a figure made up largely of full-time jobs. The number of hours worked by staff fell by staff also fell by 2.8%. The study also found that redundancies were at three times the level recorded at this time last year.

Over half of retailers (56%) planned to keep staffing levels the same while 25% thought they would add staff.

Helen Dickinson, BRC chief executive, said: “Retailers are continuing to reduce labour requirements to support a reinvention in how retail and shopping works. Hours worked by employees on full-time contracts dropped more sharply this quarter as retailers seek greater flexibility in their workforce to cope with the pressure felt from the diverging costs of labour versus technology.”

The CBI has reported, however, that the heatwave has contributed to a second strong month in which 32% of retailers said sales were up, while 12% said they were down, giving a positive balance of 20%, the second highest reading so far in 2018 for the employer organisation’s monthly distributive trades survey.

But this was not the harbinger of hope for the sector, according to Alpesh Paleja, CBI’s principal economist. He said: “While the heatwave has boosted retail sales in recent months, we may be seeing some early signs of a cooling off with orders falling in the year to July and retailers expecting no growth in sales next month.”

The retail sector accounts for most of the 50,000 job losses experienced in the UK this year, according to Press Association figures released earlier this month, with chains such as Maplin, New Look, Marks & Spencer, Carpetright, House of Fraser, Poundworld and Toys R Us losing large numbers of jobs and in some cases shutting down completely.

Women have been disproportionately affected by the fall in jobs, as 70% of retail employees are female, the BRC states.

The BRC study found that 19% of retail employers were anticipating further cuts, compared with 15% at this time last year

The increase in costs for the sector includes the added expense of sourcing goods from abroad following the fall in the value of the pound, alongside rises in business rates and the legal minimum wage. Figures from management consultant the Altus Group show that the average business rates bill for a department store in England and Wales this year for rocketed 26.6% to £717,952 after last year’s revaluation. At the same time, household spending has reflected weak consumer confidence as uncertainty over Brexit continues.

Paddy Lillis, general secretary of the shop workers’ union USDAW, earlier this month described the scale of store closures as alarming. “We are very concerned about the impact of Brexit increasing prices at the same time as incomes being squeezed, customers changing their shopping habits and new technology being introduced.”

TUC general secretary Frances O’Grady said that the lack of wage growth in the economy was a key factor behind the fragility of retail: “Retail depends on customers having money in their pockets. One reason why some shops are struggling is because wage growth has been very weak,” she said.