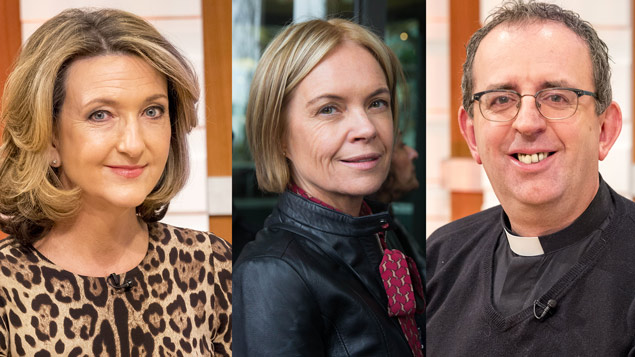 Hundreds of BBC staff, including stars such as Mariella Frostrup, Victoria Derbyshire and Rev Richard Coles, have written to the corporation demanding “full pay transparency”.

In an open letter to BBC director general Tony Hall, they demand transparency around what all staff earn and how pay levels are decided. It is signed by nearly 250 women and men including household names and behind-the-scenes staff.

Harassment and inequality: should some of the red-tape “burdens” be reinstated?

In January, the BBC said it aimed to be the “most transparent organisation when it comes to pay”. It followed a review of on-air pay by PwC, and the pay inequality revelations of BBC editor Carrie Gracie.

The letter argues that making all pay and pay decisions transparent is the “fastest, cheapest and fairest” way to tackle unequal remuneration at the BBC.

The authors argue that transparency will also uncover any other inequalities that exist in relation to not only protected characteristics defined in the Equality Act such as race, age and disability, but also characteristics that are not legally protected.

They hold that any employer committed to fairness should monitor pay differences relating to bias linked to social class, education and regional origin.

A BBC spokesperson said: “We already have a project planned to look at transparency at the BBC which will consider – among other things – whether all salaries from the licence fee should be published and what other measures are necessary that wouldn’t put the BBC at a competitive disadvantage.

“The BBC already publishes more information about itself, its operations and its staff than any other broadcaster. We are already committed to going further and faster than any other organisation in closing our gender pay gap.

“We have set out real targets and have announced a project led by Donalda McKinnon to do all we can to help the progression and culture for women within the organisation.”

The spokesperson added that BBC Studios and BBC Worldwide are fully commercial businesses and are not funded by the licence fee. “It would be wrong to put them at a competitive disadvantage at a time we should be doing all we can to support British content against the global West Coast giants,” they added.

The open letter is published below:

It’s time for full pay transparency at the BBC. Transparency about what everyone earns, about how pay is decided, and also about promotion and recruitment across all areas of the Corporation.

There is no legal bar to doing this. The BBC just needs to change the expectations of people working here, by telling them that in future their pay will be transparent.

The BBC says it wants to be “the most transparent organisation when it comes to pay”. Full publication of individual salaries and benefits (and other payments through BBC Studios and all commercial arms) would have a lasting positive impact on the culture of the BBC and beyond. There are many reasons for doing this now:

1. It’s the fastest, cheapest and fairest way to begin to tackle unequal pay at the BBC. When everyone knows exactly what everyone is paid, it is easy to identify comparators and start conversations about value. Transparency is the tool that can stop the BBC breaking the law on Equal Pay.

2. At the same time, transparency is by far the most effective way to uncover pay discrimination of all kinds – against ethnic minorities, people with disabilities, LGBTQ+ people, or on the basis of age or any other legally protected characteristic.

3. It’s also the best way to uncover pay differences linked to characteristics which may not be legally protected but which employers committed to fairness should want to monitor, such as bias linked to class, educational background or regional origin.

4. There is increasing evidence that pay transparency is good for employers, not just for employees. We believe it will save a lot of money. Our pay structure is likely to flatten as very high salaries become even harder to justify. And the cost of the BBC’s current approach is not just financial, it has also eroded trust and morale. This change in culture will attract and retain great people, because people want to work in places where they are heard and respected, and where they understand how their pay is set.

5. The BBC spends public money. The public deserves to know how that money is spent.

We love the BBC and believe in its values of transparency and accountability. We want to work with you to help the BBC live up to those values, and to restore the trust of staff and audiences in the BBC’s stated commitments.