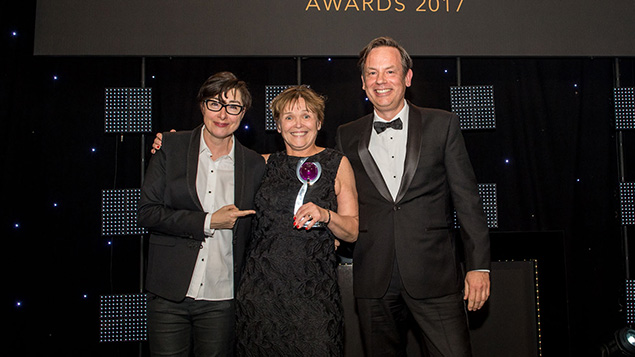 As we launch the 2018 Personnel Today Awards, we profile some of the individuals and teams who were crowned the best in the business last year. Vicky Williams, director of people at the Lawn Tennis Association, impressed judges with her commitment to embedding values and culture change and delivering results.

You can now enter the 2018 Personnel Today Awards, which celebrate the very best of HR.

Now in their 20th year, the awards will take place at the Grosvenor House Hotel in London in November.

Vicky Williams’ journey into HR started with a Saturday job at M&S in Richmond. “I wasn’t keen on going to university and the store manager used to give me a lift to work,” she remembers. “He suggested I apply for the junior manager trainee scheme and let me shadow the management team for a couple of weeks. I absolutely loved it.”

Out of 30,000 applicants, she secured one of 150 places and sailed through the scheme, opting to specialise in HR after her training. “I knew before I even started that I wanted to be an HR manager,” adds Williams. It proved to be a wise choice – last year she won HR director of the year at the Personnel Today Awards for her role as director of people at the Lawn Tennis Association.

Her time on the shop floor in London’s Marble Arch branch taught her that commercial focus was as important as the people behind it. “In my second week there the Lord Sieff (the then chairman) walked in asked me what the takings were for the week, ratio per head of staff. He didn’t mind what discipline I was in, he just wanted to know what was selling and what wasn’t.”

Before joining the LTA five years ago, Williams spent 20 years at outsourced catering company Compass Group, where she had 14 roles across both generalist and specialist HR. But travelling around 30,000 business miles per year and working for a sprawling company (overseeing more than 100,000 employees at its height) no longer appealed, and she decided to take a sabbatical – but that didn’t last long.

“Three months in, someone recommended an HR recruiter and I looked at their website, where the LTA role came up,” she says. “For my next job I had been looking for a smaller company where I was in charge of my train track [at Compass there was another HR director above her], potentially a not-for-profit organisation and something more local.” She hit the jackpot with the LTA, which is just eight minutes’ walk away from her house.

Since joining the LTA, Williams has focused on turning around the culture of the organisation so that its core values are not only understood but embedded. She took the role at a time when there had been a decline in tennis participation and the LTA had faced criticism from leading players such as Andy Murray.

One of the ways she has tackled this is by focusing on the LTA’s 25,000-strong volunteer population – the unpaid workforce that encourages the public to visit their local courts and parks. The results suggest her approach is working – tennis participation is up to 8% from -5.4%.

“The only difference between an employee and a volunteer is that volunteers don’t have a contract,” she says. “In every other regard they should be treated as though they’re one of us.” Every year, volunteers can be nominated for one of 20 awards – those who make it through the regional heats are invited to a prestigious ceremony during Wimbledon fortnight in the event’s hospitality suite.

Whether it’s with employees or volunteers, the HR team at the LTA have ensured that its four values [teamwork, integrity, passion, and excellence] are understood by giving examples of both positive and negative behaviours associated with each value. So colleagues know that “passing the buck” is not teamwork, for example.

Having worked for organisations where HR supports busy people who are dealing directly with customers, simplicity is key, adds Williams. “My career has been based on supporting people to give service on the front line, and whatever an HR function does, it has to have things that HR does that are simple and easy to understand.”

As a sporting body, one of HR’s other key roles is to ensure that safeguarding is at the centre of any touchpoints employees and volunteers have with the public. The HR director of the FA recently had to appear at a public inquiry into historic sex scandals involving coaches, and Williams never wants to be put in such a position.

“We’re under the spotlight and we must embed duty of care policies with our players, coaches and parents, not just our employees,” she says. Shortly after she moved into the LTA role, she brought the volunteer function under HR, as it had previously fallen under the participation department.

My career has been based on supporting people to give service on the front line, and whatever an HR function does, it has to have things that HR does that are simple and easy to understand.”

The rest of the HR function follows the HR business partner model – so there are three business partners and an HR services delivery manager who looks after the transactional side, such as payroll. HR also covers internal communications and Williams is in the process of recruiting someone to head up diversity and inclusion.

Flexible working and recruitment is encouraged – Williams took out adverts in local primary school newsletters to recruit a number of employees on school-hours contracts. There’s also a “flexible talent bank” of workers happy to take on temporary contracts when the need arises, who accrue benefits such as Wimbledon ticket allocation once they’ve worked a certain number of shifts.

In the months ahead, Williams will be helping the LTA’s new CEO, Scott Lloyd, settle in and build an executive team ready for the challenges ahead. This is where her commercial focus will prove invaluable.

“We need to save some money this year,” she adds. “We’re largely funded by the surplus in money made by Wimbledon, and this year they are looking to fund a new roof for Court One, so we need to ensure we’re fit for purpose in a more economical environment.”

And she has no intention of allowing herself to become complacent about what’s been achieved so far.

“It’s important not to forget everything we’ve done already,” she says. “In so many organisations, people introduce things and move onto the next thing, when perhaps the first thing hasn’t had a chance to land. Then they wonder why engagement scores or retention haven’t increased, or why people don’t understand the values.”

With tennis participation on the increase and employee engagement at a high, there is plenty to celebrate.