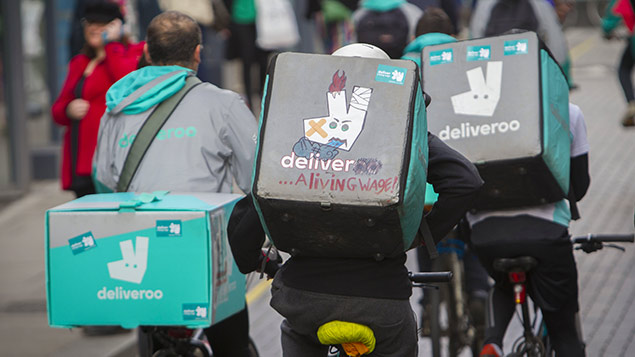 A High Court judge today granted permission for Deliveroo couriers to challenge a previous ruling that they could not be classified as workers.

The Independent Workers Union of Great Britain (IWGB) hopes the court will overturn a ruling by the Central Arbitration Committee (CAC) last November that rejected the union’s application to represent Deliveroo couriers in parts of London and confirmed the self-employed status of all drivers and riders working for the firm.

The IWGB told the High Court that under Article 11 of the European Convention on Human Rights, collective bargaining laws should cover Deliveroo riders. This argument led judge Justice Simler to grant permission for a full judicial review to be listed for one and a half days.

If won, the IWGB claimed, the case would have significant ramifications for the gig economy and human rights in the UK.

In the previous CAC ruling it had been concluded that because riders were able to pass on a job to a substitute or abandon a job, they were not obliged to provide a “personal service” and therefore could not be classified as workers. This denied them the right to union recognition.

Deliveroo had claimed this as a victory and pressed for the law to be changed allowing it to offer benefits such as sick pay to riders and drivers while they continued to work flexibly.

Dan Warne, Deliveroo’s managing director in the UK and Ireland, said at the time: “This is a victory for all riders who have continuously told us that flexibility is what they value most about working with Deliveroo.”

But the IWGB has continued to claim that the riders were being denied basic employment rights including a guaranteed minimum wage, holiday pay and collective bargaining rights.

In response to the latest development, Dr Jason Moyer-Lee, IWGB general secretary, said: “What’s happened today is this case has become not just an employment rights issue, but rather a matter of fundamental human rights. Deliveroo should take a serious look at itself and ask itself whether it really wants to save a bit of money at the expense of the human rights of the individuals who make their business a success.”

“The court has allowed a limited challenge on human rights grounds. Deliveroo has long argued that the self-employed should have access to greater protections, and we welcome any debate on how that can best be achieved.”

For Simon McVicker, director of policy at IPSE (Association of Independent Professionals and the Self-Employed), the case was evidence that the Government needed to establish a definition of the term “self-employed” that would avoid for so many court cases: “The need for a statutory definition of self-employment crystal clear. It is unacceptable that policymakers are relying on costly, time-consuming court cases as the first port of call in determining employment status.

He added: “This case – just days after Pimlico Plumbers were defeated in the Supreme Court – demonstrates just how beneficial a positive definition would be.”