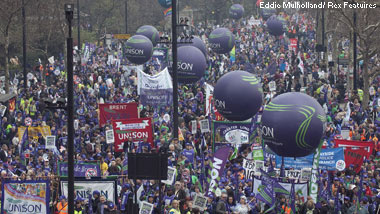 The Unison ballot, in which members voted yes to a strike over public sector pensions, could be “fatally flawed”, meaning that employers could put a stop to the planned “day of action” on 30 November.

as the line is read by the browser. If you wish to have the player instantiated only after

the rest of the HTML is processed and the page load is complete, remove the line.

Unison members voted “overwhelmingly” in favour of the strike action in a ballot that closed today over proposed reforms to their pension schemes, with 245,358 public sector workers voting to strike and 70,253 voting against action.

But, according to Chris Mordue, employment partner at law firm Pinsent Masons, public sector employers could challenge the ballot due to errors in the notifications sent to employers.

Mordue claims that the Unison ballot notice said nothing about the aggregated ballot they undertook – where the votes of Unison members from a number of employers are all counted together – but indicated that they would be holding a single employer ballot.

If an employer challenged the ballot on this basis and was successful, members of Unison, the biggest public sector union, would not be able to take part in the strike action at the end of the month, he claimed.

Mordue explained: “Unison has just announced the results of the biggest industrial action ballot ever conducted, but the sheer scale of the ballot could have made it unlawful.

“The ballot notices breach the legal rules on strike ballots and leave the union open to challenge. If successful, this would be a ‘showstopper’ as far as Unison’s participation in the mass day of action planned for 30 November is concerned. The same issue may also invalidate ballots by other unions, such as the GMB and Unite, and prevent them striking too.”

A spokesman at Unison said that the ballot was legal and the union had followed all of the legal requirements.

“Whilst the union has to decide at the outset whether it is aggregating the ballot across different employers it is under no obligation when giving notice to specify whether the ballot is aggregated or not,” Meryon argued. “That may only become apparent when the employer is given the result.

“Moreover, even if the ballot is aggregated, the obligation on the union is to provide specified information in relation to the relevant employer and so one would expect the wording to address itself to that employer.”

Yesterday, public sector unions said that they were “firmly committed” to continuing preparations for the planned strike action at the end of this month, despite a new offer from the Government on the pension reforms.

The offer included a more generous accrual rate, alongside the protection of pensions for any public service worker within 10 years of their pension age.

However, the TUC’s Public Services Liaison Group said that unless progress was made in the negotiations, plans for a “day of action” at the end of this month would go ahead.