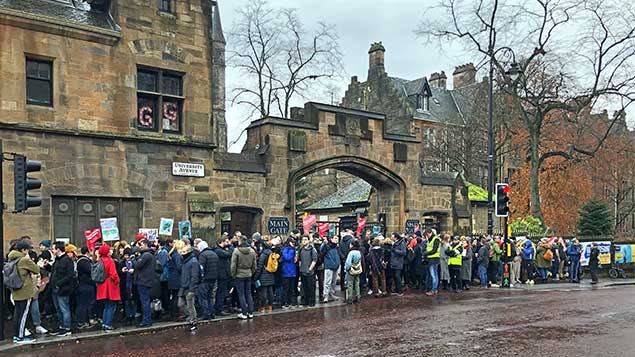 Today (25 November) marks the start of an eight-day strike by lecturers and other university staff over pay and pensions.

Pickets have been set up at 60 universities, led by the University and College Union. The UCU also said talks were under way to ballot other institutions on further strike action in the new year.

The UCU said it had processed requests from around 3,500 potential new members since the union announced the strikes three weeks ago. It is estimated that 40,000 lecturers and other workers are taking part in the current action.

Academics at Manchester University have set up banners criticising former chancellor George Osborne, who is an honorary professor of economics at the institution; they also accuse the university of “renting space to fast food restaurants while claiming they don’t have enough money to properly fund pensions”, according to one academic.

The UCU said staff had reached “breaking point” over several issues including workload, a 15% gender pay gap, real-terms cuts to pay and changes to pensions.

The union believes members will be £240,000 worse off due to changes to the Universities Superannuation Scheme made since 2011 – a typical member would now pay around £40,000 more into their pension, but receive around £200,000 less on retirement. Changes to the scheme include an increase in employee contribution levels to 9.6% from 6.35% in 2011, and the closure of final salary pensions.

University leaders need to stop obsessing about ‘world leading research’. Give us job security and we’ll write as many books as you want. The barriers to entry are far too high. You need to nurture talent, not expect it to come knocking at the door #UCUstrike

Overall, 79% of UCU members that voted backed strike action on changes to pensions, while 74% backed strikes over pay, equality and the increased casualisation of work contracts.

UCU general secretary Jo Grady said: “We have been receiving news of solid support for the strikes across the UK. That support sends a clear message to universities that staff will not settle for pay cuts, increased pension costs or deteriorating conditions.”

She added that the union agreed with Labour education secretary Angela Rayner that universities should put students first, and urged universities to come back to their members with a better offer.

“We have seen thousands of people join the union in the few weeks since we announced this round of strikes and, if universities continue to refuse to negotiate seriously, more action with even more people involved could be on the cards,” she said.

As well as the eight strike days between today and 4 December, UCU said members would begin “action short of a strike”. This is where employees will, for example, not work strictly to contract, will not cover for absent colleagues and will refuse to reschedule lectures lost to strike action.

On Twitter, Joseph Dunne-Howrie, a lecturer at City University in London and the Rose Bruford College of Theatre and Performance and at the University of East London, said university leaders ­“need to stop obsessing about ‘world leading research’.”

“Give us job security and we’ll write as many books as you want. The barriers to entry are far too high. You need to nurture talent, not expect it to come knocking at the door.” Dunne-Howrie has to work across three higher education institutions, all on temporary contracts, he said.