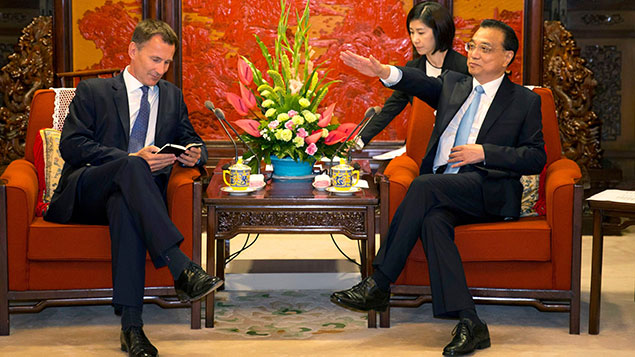 It was just a slip, albeit an absurd one, but the new foreign secretary’s gaffe in China this week sheds light on an often ignored but vital aspect of international business − cross-cultural understanding, writes Matthew MacLachlan of Learnlight.

It may have been a slip of the tongue that was laughed off by those present, but the new foreign secretary’s highly publicised gaffe in referring to his Chinese wife as Japanese during his visit to Beijing has shown just how easy it can be to risk causing offence through cultural insensitivity while working overseas.

Business travel in the Trump and Brexit era

How to manage business travel health

Hunt’s error caused such a stir for an unfortunate cocktail of reasons. Leaving aside that no one should ever confuse their wife’s nationality if they value matrimonial harmony, there are particular sensitivities around the relationship between China and Japan, given the two countries’ history of warfare, xenophobic attitudes and current dispute over islands in the East China Sea.

Add into that sensitivities around the lazy British joke, since colonial times, that all east Asians “look the same”, and a simple slip of the tongue is elevated into a cringeworthy “‘hide behind the sofa” moment that could have caused great offence.

Hunt is not the first British minister to risk upsetting the Chinese. In 2010 David Cameron wore a poppy to an official event in Shanghai, which was seen as a reminder not of British lives lost in combat, but of China’s humiliation by Europe in the 19th-century opium wars, which saw the annexation of Hong Kong and Macau.

I don’t for one minute believe the foreign secretary is culturally insensitive. On the contrary, I am sure his privileged education, family connections and ministerial briefings mean that he is more aware than most of the delicacies of the China-Japan relationship, and his ability to speak to the Chinese in Mandarin is enviable.

But the fact that someone presumably so knowledgeable can make such a potentially serious error highlights just how easy it would be for most professionals to make a culturally insensitive mistake that could have grave ramifications for the business relationships they are trying to cultivate.

Businesses are increasingly looking outwards for growth, and export has been targeted as the key to strengthening the economy. Globalisation and digital communication have given even small businesses access to and presence in the global market. Attitudes to working with international partners have changed in recent years, as businesses have begun to realise that fluency in the relevant language is not enough.

Indeed, even for employees working in their own countries, there is no longer such a thing as a mono-cultural workplace; every employee is working with colleagues and clients from a wide range of cultures every day. As employees meet with colleagues, negotiate with suppliers and partners, and support their customers as a routine part of their daily work, the need for intercultural awareness is even more vital.

To compete in a global business environment, businesses need more than just language proficiency – already a skill area that is in deficit. They need a large talent pool with intercultural skills: awareness of cultural differences and nuances and effective strategies to communicate, build relationships, and develop trust in a globalised workplace. Businesses are increasingly aware of this.

Even for employees working in their own countries, there is no longer such a thing as a mono-cultural workplace; every employee is working with colleagues and clients from a wide range of cultures every day”

As a global provider of language and soft skills courses, in the past two years alone Learnlight has seen a 40% increase in the number of courses we have delivered to the employees of multinational companies around global working skills. But there are still too many who are behind the curve – and quite possibly under-performing internationally because of it.

Too often businesses rely on learning a short list of dos and don’ts – for example handing over a business card to a Japanese person with two hands or not admiring an Arab’s watch. This approach is based on stereotypes and is at best misleading, and at worst based on a careless disregard for reality.

Relying on the stereotype that Germans don’t have a sense of humour, Americans are loud, and Italians are lazy will not only wreck your international business, but cause irreparable damage to your reputation. In simple terms, intercultural competence is the combination of an awareness of difference and the ability to build collaborative environments across different cultures.

Interculturally fluent people are those who are able to understand that the way they see the world is not necessarily shared by others. Their default reactions and communication styles are not the same defaults other people have. They are then able to create trust and relationships by identifying cultural clues, recognising cultural influences and finding a mutually acceptable middle ground.

This is an incredibly useful skill for those operating abroad. Without intercultural competence an employee can ruin your organisation’s reputation without realising it. But with it, they are much more likely to succeed in enhancing it, whether they are leading cross-border business negotiations, discussing and understanding new markets, finding a way to make your business processes work locally, or finding a culturally appropriate way to advertise your product without alienating or possibly offending the entire local market.

Relying on the stereotype that Germans don’t have a sense of humour, Americans are loud, and Italians are lazy will not only wreck your international business, but cause irreparable damage to your reputation”

Organisations are increasingly operating across borders of all kinds and encountering people from diverse backgrounds. To succeed in this environment, employees who have any exposure to people from other cultures require a wide range of soft skills, including cultural awareness and adaptability. HR professionals therefore need to place a greater emphasis on these skills in their talent and recruitment programmes and offer support and training in these areas where required.

Those who do so will substantially reduce their risk of replicating the foreign secretary’s cultural faux-pas – and suffering the potentially serious consequences of doing so.

Matthew MacLachlan is the head of intercultural and soft skills training at Learnlight, an edTech company that provides language and skills training to some 1,000 organisations in more than 150 countries. Matthew has more than 20 years’ experience of helping organisations develop their global talent
View all posts by Matthew MacLachlan →
Previous Article
Next Article