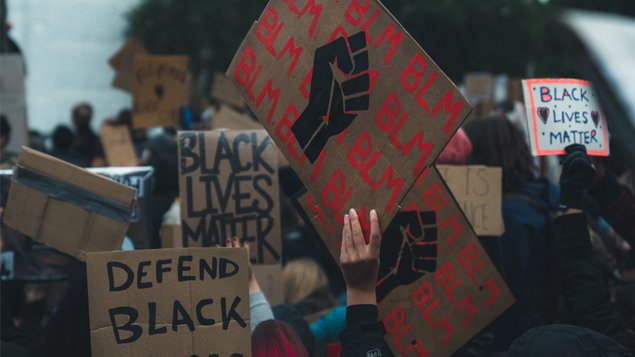 For white HR professionals to become true anti-racist allies, they need to get better at sitting with discomfort when examining ‘white fragility’ and ‘white privilege’, write Ama Afrifa-Tchie and Sarah McIntosh.

Following the murder of George Floyd and the subsequent Black Lives Matter protests, society is finally waking up to the systemic and institutional racism that exists, including in our places of work.

Mental Health First Aid (MHFA) England research found that a proportion equivalent to 6.5 million UK employees feel they cannot be their ‘real self’ at work and less than half (43%) think their colleagues know the ‘real’ them. Couple this with a YouGov survey which found that half of black Britons are as likely to have experienced racism in the workplace as on the street and it becomes clear that urgent action is needed.

The need to become anti-racist isn’t new, but the events of the past six months have highlighted the slow progress  made across society. The extent and pervasiveness of racism and its impact on People of Colour and black people can often be underestimated, and white people can experience discomfort when faced with information about racial inequality and racism.

Many employers and HR departments recognise the intersection between race and mental health and are taking action to prioritise their diversity, inclusion and wellbeing strategies. But for white people to truly become anti-racist allies, they need to get better at sitting with discomfort when examining ‘white fragility’ and ‘white privilege’, so that action and change is not slowed down or halted.

What is white fragility and privilege?

When white people are challenged around their privilege and their contribution to a system that’s has been built by white people for white people, they may experience ‘white fragility’. White fragility is discomfort and defensiveness on the part of a white person when confronted by information about racial inequality and injustice.

It can manifest in many different ways – avoidance of conversations about race due to feeling uncomfortable; denial that you might be part of the issue; defensiveness or justification for what you have said or why you acted in a particular way; anger that someone might be questioning you and guilt when the realisation hits that as a white person you may be part of the problem.

It is important that white people educate themselves on privilege, race, racism and racial justice. This is particularly important for white people who work in HR, as only 7% of senior HR jobs are held by a person who identifies as non-white, compared with 18% at junior levels or in entry-level positions.

HR is the profession that is very much the ‘gateway’ to the workplace – handling everything from recruitment processes to training. But for black people, these ‘gatekeepers’ often aren’t representative of them. Racial representation in HR and across the whole organisation is critical, as this empowers People of Colour and black people to have the confidence and acknowledgment that they are valued, that they will be listened to, and that they can ultimately build a successful career.

Racial representation in HR and across the whole organisation is critical, as this empowers People of Colour and black people to have the confidence and acknowledgment that they are valued.”

Research by the Harvard Business Review has shown that the ‘unconscious biases’ we have towards other people and groups can affect how we understand and engage with an individual, and ultimately result in hiring processes being unfair. People often think that unconscious bias only occurs at interview stage, but it’s embedded through every stage of recruitment from job design and job descriptions, adverts and where you advertise, to who is on the board and senior teams. To remove this inherent bias, you have to assess each stage of the process and analyse in great detail how to create early interventions to remove barriers and promote inclusivity.

Another part of the problem is the legislation and case law that many HR practitioners have to fall back on when dealing with issues and grievances. How many times have we heard in a disciplinary outcome report that “it wasn’t the person’s intention to make you feel that way”? How many times have we struggled as HR professionals to take action on covert acts of racism, such as racial micro-aggressions, because a perpetrator didn’t see anything wrong with what they did or said? The impact of an action is what’s important here, not the intent, and sadly our HR policies and the Equality Act don’t make this as easy as it should be to act upon.

Despite these challenges, we must do better as HR professionals to determine what’s acceptable and what is unacceptable behaviour in regard to race. We need to add examples of racial micro-aggressions to our diversity and bullying and harassment policies, encourage continuous learning and provide anti-racist training to staff in order to proactively tackle racism. There should be a zero-tolerance approach to racist behaviour, and we must lead by example by continuing to educate ourselves.

How to use white privilege for good

All HR professionals should be active anti-racists, but for white HR professionals in particular, their privilege can be used to bring about change. They should lead on action, be role models for the business, challenge the business when diversity and inclusion issues are overlooked and listen to and amplify the voices of People of Colour and black people.

But, it is important that white people don’t practise ‘white saviourism’, which is where an action is self-serving rather than a genuine commitment to racial justice.

White HR professionals should be constantly learning about the barriers to success black people face on a daily basis and exploring how to dismantle these. They should be confronting racial injustices even when it feels uncomfortable and they need to be cognisant of the fact that language is a powerful tool that can be used to include as well as exclude people.

We must all be careful when commenting on racism and racial injustice; statements such ‘I don’t see colour’ or ‘I can’t believe this is still happening in 2020’ are unhelpful, frustrating and upsetting for black people.”

We must all be careful when commenting on racism and racial injustice; statements such “I don’t see colour” or “I can’t believe this is still happening in 2020” are unhelpful, frustrating and upsetting for black people. Constantly educating yourself is key to overcoming the feeling of being uncomfortable, but you must not become complacent in your comfortableness – keep learning and sharing your learnings with colleagues.

MHFA England is calling on all organisations to become actively anti-racist and has released new guidance on supporting black colleagues. HR has a significant role to play in dismantling the existing racial biases in the workplace, and while understanding and tackling white fragility and white privilege is one step in this process, examining policies through an anti-racist lens, recognising the diversity of your workplace, being trusted inclusive business partners and role models for the business, and taking action to address lack of representation is absolutely crucial.

As uncomfortable as some people find it, the current conversations about race and race equity are bringing about widespread recognition that systemic racism is commonplace. Whatever our identities and life experiences, we should all be able to bring our whole selves to work, and right now we know that this is not the experience of many black people in the UK.

When organisations empower employees to be their whole selves at work, it’s better for everyone’s mental wellbeing and better for business.

About Ama Afrifa-Tchie and Sarah McIntosh