Last October, chancellor Philip Hammond, trumpeting the end of austerity in his Budget address, told MPs that the national living wage would be set at £8.21 from 1 April 2019, 20 years after its introduction.

He added that the government’s ultimate objective was to end low pay. This was the same Philip Hammond who in 1997, soon after Labour’s victory in that year’s general election, told the House: “I predict that, at the margins, the result of minimum wage legislation, set at any effective level, will be to drive some small businesses into the black economy.”

The economic damage would be “massive”, he warned, describing the National Minimum Wage Bill as an “ill-conceived piece of legislation and a hangover from Labour’s past. It is an IOU.”

Damian Green MP even predicted that the NMW would “discourage workers from taking low-paid, socially useful work”. He was joined by now speaker of the Commons John Bercow, who told his peers the NMW was “bad for small business, bad for investment, bad for competitiveness and bad for exports and jobs.”

Yet, evidence that the minimum wage did not have such negative effects was already in the open. The US had applied a federal minimum wage since 1938 with no downside and in the UK, an analysis by the London School of Economics of the Agriculture Wages Board found no evidence that jobs had been lost through state pay intervention.

These fears were echoed widely. Michael Portillo raged against the proposals as “immoral” in 1997, only to reverse the Conservative commitment to repealing the Act in 2000 acknowledging it “has caused less damage to employment than we feared”.

The perhaps grudging phrase “less damage” has turned out to be an understatement. According to today’s 20 Years of the National Minimum Wage report, if there had been no NMW legislation and the £8.21 national living wage had risen in line with average earnings, average low hourly pay would be £6.54. If it had risen with prices it would be £5.39 measured against the consumer price index. For a full-time worker the difference is a substantial £5,000 a year, says the Low Pay Commission study.

Addressing the concerns from business and the Conservative Party in the 1990s, the Commission states that “employers have adjusted to the NMW and the NLW in a number of ways: by reducing profits; increasing prices; and restructuring their business and workforce”.

It appears beyond dispute then that Tony Blair and Gordon Brown’s case for a NMW built around a business perspective has been fully vindicated. Their position was that low pay undermined the recruitment and retention of staff and encouraged poor productivity and performance, with trade minister Ian McCartney telling the Commons in 1997: “Businesses want to get on and succeed, and to produce quality goods and services. They are sick and tired of being undercut by the cowboys.”

We all know the examples: a homeworker paid as little as 35p an hour, a cleaner paid £1.30 an hour or a security guard paid £2.35 an hour – and bring your own dog!” – Margaret Beckett, introducing the NMW Bill in December 1997

“While the New Labour leaders successfully wooed the City – a strategy dubbed “the prawn cocktail offensive” – others highlighted the plight of workers. Trade secretary Margaret Beckett introduced the NMW Bill in December 1997, telling the House: “We all know the examples: a homeworker paid as little as 35p an hour, a cleaner paid £1.30 an hour or a security guard paid £2.35 an hour – and bring your own dog!”

The Low Pay Commission, established by Labour in July 1997, found other examples; of people working for 80p an hour in a chip shop, £1.22 as care workers and as clerks for just £1.66.

And in November 1997, McCartney, in a Radio 4 interview, told John Humphrys: “John, give me any national or international example because you pay a hairdresser a decent wage that people in the country stop having their hair cut. It’s an absolute nonsense.”

Yet the argument continued: an editorial in The Economist in 1997 wrote off Labour’s plans: “There is much that is half-baked, or plain wrong. The minimum wage will cost jobs.” In a later editorial the magazine conceded: “None of these fears have come to pass.”

The Act was enacted on 30 July 1998, with the law coming into force in April 1999. Two million people got a pay rise overnight, and given the estimated then 29% gender pay gap, women disproportionately benefited.

However, august bodies such as the CBI, British Chambers of Commerce and British Retail Consortium still harboured doubts as late as 2005 when Tony Blair agreed an increase in the rate to £5.05. The CBI said: “Even a low minimum wage would reduce job opportunities and create major problems for wage structures in a wide range of companies.” 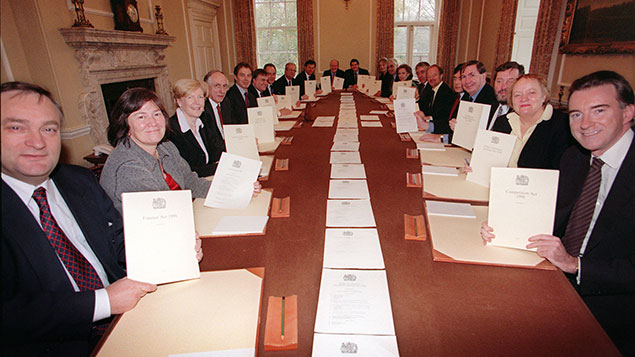 The LPC report confirms that these fears have not come to pass, although there have been a few cases where hours have fallen in response to higher minimum wages. And some employers have accepted lower profits as productivity failed to rise in line with NMW increases and the market has prevented them from increasing prices.

There is also a debate to be had over the role of the NMW in helping to propel the growth of the gig economy as employers look to cut costs and in-work benefits. But again, research does not fully support this logical-seeming notion. According to Resolution Foundation research, the main rise in self-employment predated the full effects of NMW and since 2016 employee growth has exceeded self-employment growth. The research found no link between NMW rises and cuts in investment.

The Resolution Foundation, which launched its own report on the NMW over the weekend, also notes that in 2017 the proportion of employees receiving “low pay” (ie, hourly earnings below two-thirds of the national median) fell to its lowest level since 1982. And many commentators interpret Philip Hammond’s objective of ending low pay as meaning raising the NMW until it reaches two-thirds of median hourly earnings. This could make the UK’s wage floor the highest in the world.

The Resolution Foundation report trumpets the latest NMW rises as benefiting two million workers with women’s pay packets particularly boosted because women make up 60% of minimum wage earners. The North East of England will also disproportionately benefit as the region has the largest concentration of minimum wage workers in the UK.

Nye Cominetti, analyst at the Resolution Foundation, said: “This policy, condemned as a jobs killer when it was first introduced, has turned out to be one of Britain’s biggest ever policy successes for living standards.

“The national living wage is set for another big rise next year. The chancellor is right to be signalling now where it should go after 2020. However, he should also ensure that the next phase of minimum wage rises are done so with the evidence carefully examined.”

Hammond, says, in addition to “ending low pay”, he will launch an evidence-based review of minimum wage rates around the world led by Professor Arindrajit Dube to gauge how the policy should be applied in future and so we can understand more about its impact on the labour market.

As he faces huge issues over the country’s positioning on Brexit, it’s fair to say that Hammond’s own journey with the national minimum wage has been an epic one – perhaps one that he could bear in mind as flexibility is needed for those dealing with the current crisis.

The history of the national minimum wage

Graphic: Personnel Today using Preceden based on information from the Low Pay Commission

What about the impact of hourly rates on the welfare bill? If hourly rates of pay remain too low (or probably lower without a minimum wage) surely that means the welfare/income top-up bill will need to be higher to plug the gap between earnings and cost of living? Assuming we want to tackle poverty and homelessness and child poverty. Point is we all know Govts don’t want to have a higher benefits bill. Neither do they want to announce tax hikes. Surely a decent and fair minimum wage (I would set it even higher) would pay dividends in a happier workforce who feel properly rewarded for their labour – AND less necessity for state income support, thereby enabling taxpayers’ money to be diverted elsewhere – eg to social care, elder care, primary/secondary education, policing, transport, NHS etc ???