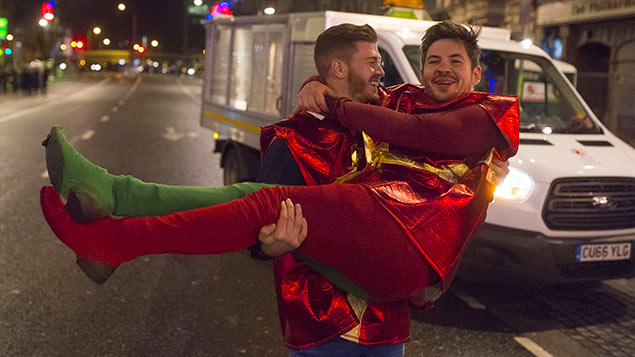 Revellers in Cardiff on the last Friday before Christmas
REX/Shutterstock

During the Christmas period employers face a minefield of HR challenges. How well prepared is your organisation for the festive season? Ashok Kanani and Laura Merrylees set out some essentials.

Workplace Christmas parties bring up issues of conduct and discrimination. For example, employees may misbehave, or fail to turn up the next day.

Holiday and overtime issues also commonly arise at this time. Annual leave requests can be concentrated around the same days, while overtime requirements can conflict with employees’ personal plans.

1. What should employers do to prepare for the festive season?

Managers should familiarise themselves with their employer’s policy on Christmas parties or work-related social events.

Additionally, employers should consider the option of issuing a statement to employees in advance of a Christmas party or similar work-related event.

This statement can remind employees of conduct matters, including the dangers of excess alcohol consumption, and behaviours that could be viewed as harassment.

2. Do employers really need a policy on workplace social events?

Yes. Employers should maintain a policy because they have a duty of care towards staff, and as a matter of good practice.

The Equality Act 2010 makes employers liable for acts of discrimination, harassment and victimisation carried out by their employees in the course of employment, unless they can show that they took reasonable steps to prevent such acts.

3. Is an employer responsible for what happens at a Christmas party?

It is prudent to assume that an employer will be liable. Legislation refers to the term “in the course of employment”.

In Chief Constable of the Lincolnshire Police v Stubbs and other, a police officer complained of sexual harassment by work colleagues in a pub outside working hours.

The Employment Appeal Tribunal held that social events away from the police station involving officers from work either immediately after work, or for an organised leaving party fell within the remit of “course of employment”.

Furthermore, in October, a recruitment company was held vicariously liable for the actions of its boss when he punched a colleague on a Christmas night out. In Bellman v Northampton Recruitment, a “significantly inebriated” managing director caused a sales manager brain damage at a post-party drinks gathering.

4. Can employees be disciplined for misconduct after a Christmas party?

Yes, if the incident is sufficiently closely connected to work to have had an impact on the working situation.

In Gimson v Display By Design Ltd, the employer was found to have fairly dismissed an employee for a brawl after the end of a Christmas party.

5. What should an employer do where more than one employee is involved in the same incident?

Where the circumstances are truly parallel, employees must generally be treated the same.

Establishing “who is to blame”, however, can be difficult where memories are blurred by alcohol and the evidence is unclear.

In Westlake v ZSL London Zoo, two zoo keepers got into a fight at London Zoo’s Christmas party as a result of which Ms Westlake was dismissed and the other zoo keeper, Ms Sanders, was issued with a final written warning.

Given the lack of clear evidence as to who started the fight, the employment tribunal found Ms Westlake’s dismissal to be unfair.

The tribunal observed that the employer could have legitimately dismissed them both, or issued both with final written warnings.

6. Can employers compel their employees to work overtime in the run-up to Christmas?

If the contract of employment includes a clause requiring an employee to work overtime when required, then it will generally be reasonable to take disciplinary action if an employee refuses to do so.

In Edwards v Bramble Foods Ltd, an employee of a small food company was dismissed for gross misconduct, having refused to work overtime during the company’s busiest period, despite a clause in her contract requiring her to work extra hours when required.

An employment tribunal found the dismissal to be fair and within the “range of reasonable responses”, not least because the consequences for the employer’s business of not dismissing her could have been “disastrous”.

7. Can an employee insist on taking holidays during the Christmas period?

No. In the absence of an agreement to the contrary, workers must give notice equal to twice the length of the holiday that they wish to take.

The employer can then give counter notice requiring that the leave not be taken, so long as this counter notice is equivalent to the length of the holiday requested, and the worker is not prevented from taking the leave to which he or she is entitled in that holiday year.

Where an employee has accrued untaken leave and gives reasonable notice to the employer to take the leave, the employer must have valid business reasons for refusing the employee’s request to take leave.

Where an employee insists on taking leave and does so without approval, the employer should approach the issue sensibly and be careful not to impose a disproportionate penalty on the employee.

In Stott v Next Retail Ltd, an employee who was dismissed for failing to attend work without permission on Christmas Eve was found to have been unfairly dismissed by an employment tribunal.

8. What if an employee comes to work late or not at all the day after the Christmas party?

Can an employer dock the pay of an employee who is late after the Christmas party?

As Christmas is a Christian festival, can an employer still hold a Christmas party if some employees belong to other religions?

What issues dictate the timing of a work-related social event such as a Christmas party?

Where an employer has provided employees with a Christmas hamper in previous years is it under any obligation to continue this practice?

If disciplinary action is to be taken for lateness or non-attendance after the Christmas party, employers should ensure that staff are informed that this is a possibility in the disciplinary policy.

Where an employee does not attend due to illness, the employer should follow its attendance management policy and procedures.

Offering an attendance allowance to encourage workers not to take time off sick, as the retailer Argos has reportedly done in its distribution centres, may appear attractive.

However, it carries the serious risk of an indirect disability discrimination complaint that may be difficult to justify.

9. Can employers require employees to take annual leave during the Christmas period?

For those businesses that close over the Christmas period, employers will need to put in place arrangements requiring workers to take annual leave at that time.

Provided that there is no agreement to the contrary, employers can allocate leave to a particular time.

An employer needs to give notice that is at least double the period of leave that the employee is required to take although, in practice, employers should build the requirement into their holiday policy.

10. What if travel disruption delays an employee returning to work following the Christmas break?

This can be a common issue, particularly given planned strike action on rail services over the Christmas period.

While there is no obligation to pay employees who fail to attend work due to public transport issues, many employers will want to offer flexibility and alternative options.

For example, if the role is suitable, technology may allow the employee to work from home or from another location.

Alternatively, the employer could require the employee to make up the time later or take the time as paid annual leave.

This article was originally written by Ashok Kanani on 11 December 2015. It has received additional minor updates since then.