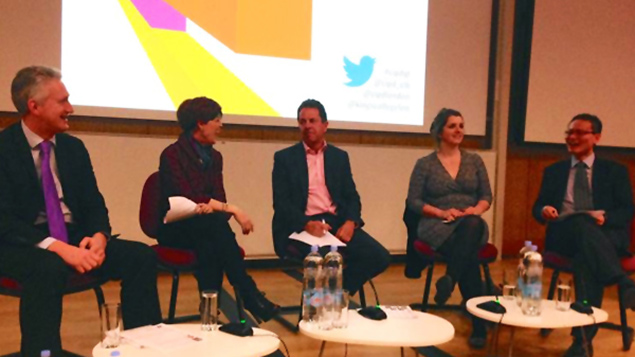 Last week’s central London CIPD event, The Future of Work, drew a good crowd. The subject, the Question Time format and the panel promised some lively debate. And Steven Toft, for one, welcomes the focus on the bigger picture.

Last Tuesday’s session covered the casualisation of the workforce, skills and the lack of them, investment in training, youth unemployment and whether or not we really should be aiming to get 50% of young people into university.

At one point, we even got onto all-women shortlists for selecting MPs. There was the occasional comic moment too. When someone asked a question about immigration, Lembit Opik quipped that he had more direct experience of Romanians than most people.

All very interesting stuff, and a lot about the present and the recent past – but there wasn’t really much discussion about the future. The session started off with a slightly too long and rambling question about the recent UK Commission for Employment and Skills’ (UKCES) Future of Work in 2030 report.

The unfocused nature of the question set the tone for the event, as did Lembit Opik’s reply. He said that it was pointless to try to predict the future as no one really has a clue what is going to happen in the next two years, let alone the next 15. True enough, Lembit, but the event was entitled “The future of work” – your audience was expecting you to at least have a go.

The UKCES report outlines four scenarios for 2030, all of which are pretty grim for all but the highly skilled and the already wealthy. It also suggests that 15 years from now, half the workforce could be on zero hours contracts. If UKCES is only half right, or even only a quarter right, that would represent a significant change to our labour market. That a government agency should say such a thing is surely worth some discussion.

Since the recession, a number of features of Britain’s labour market have received media attention – to name just a few: the increase in self-employment; zero hours contracts; more working people on benefits; relatively high immigration; the widening gap between the earnings of the top 1% and everyone else; and the UK’s low productivity relative to other developed economies.

All these things started before the recession, so they give us some idea of the direction in which the labour market is moving. Add to that the ageing of the world’s population, high public debt in western economies, warnings from some economists of decades of low growth, the shift of economic power to Asia and the potentially disruptive effects of technology, and there is plenty there to work with.

You do not need a crystal ball to come up with some views about the future of work; you just need to make some educated and imaginative guesses. That’s what was missing from Tuesday’s discussion.

In the past month or so, we have had the UKCES paper, poor figures on Britain’s productivity from the Office for National Statistics and a report from the Financial Times saying that the economy’s capacity for growth is so poor that the chances of eliminating the government deficit before the end of this decade are slim.

The CIPD’s own report on productivity said that the UK is standing at a crossroads between the high road of higher skills and value-added employment, or the low road of low cost, low wage, low skill and low productivity. I went along on Tuesday expecting to hear more about these topics, but we never really seemed to get to grips with it. I was not expecting answers, just a bit of imaginative stargazing.

Looking at the bigger picture

Having said all that, the discussion was still interesting and thought provoking. This is just the sort of thing the CIPD should be doing more of. For too long, HR events and conferences have focused on technical HR issues without exploring the wider context of business, the economy and the labour market.

As HR professionals, we need to understand the context in which we operate and the forces that will shape our organisations. There will be change over the next decade or so, but all the indications are that it will be a very different sort of change from what most of us have been used to.

Those of us whose assumptions about the world of work were formed by the post-war era are finding that those assumptions are becoming obsolete. The more informed discussion we have on these subjects, the better. Sure, I have some quibbles with the way the discussion went on Tuesday night – but more events such as this from the CIPD would be welcome.

Steven is a business consultant, with a background in organisation development and human resources. In 2007, he started the blog Flip Chart Fairy Tales under the pseudonym ‘Flip Chart Rick’ as a satirical take on business and work.
View all posts by Steven Toft →
Previous Article
Next Article