By Jo Faragher on 15 May 2014 in Bonuses, Executive pay, Pay & benefits, Pay settlements 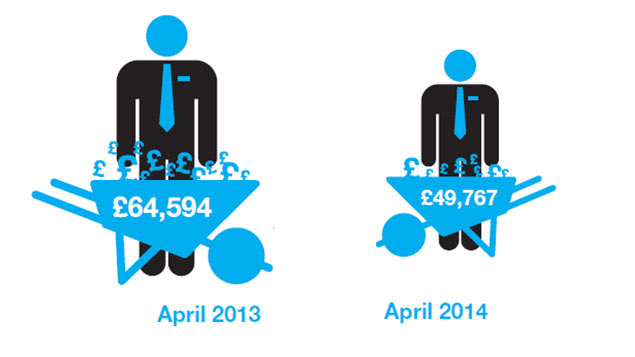 Bonuses awarded to company directors have shrunk by almost a quarter over the past year, according to the latest salary data from XpertHR and the Chartered Management Institute (CMI).

The findings of the survey mark a contrast to headline-grabbing stories about “fat-cat” bonuses in the media. Furthermore, the number of directors receiving bonuses has declined, from 85% between 2006 and 2008, to 53% this year.

Pay, including bonuses, rose by just 2.5% for all executives, the National Management Survey found, trailing behind retail price inflation over the past year. This is also down on previous years, which saw total pay increases of 3.9%, 3% and 3% respectively for 2011, 2012 and 2013.

Executives across all levels – not just directors – have experienced a reduction in bonuses, with only 36% of them in receipt of a bonus in the past year, compared with 59% previously.

However, while there has been a decline in the level and volume of bonuses, they continue to play an important role in employers’ reward strategies. On average, bonuses made up 14.5% of a manager’s salary, equivalent to 7.5 weeks’ pay per year.

For directors, a bonus constitutes a more significant portion of their salary, at 34.5%, reflecting the heightened risk and tougher decision-making at this level.

Smaller employers tended to offer more modest bonuses and pay rises, the research found. In businesses with revenues under £25 million, the average increase in total pay including bonus was 2.3%, compared with a rise of 6.9% in businesses turning over between £1 billion and £5 billion.

XpertHR content director Mark Crail said: “Clearly, senior managers are not on the bread line. But the figures show that the great majority of executives, and even directors, are not enjoying vast runaway bonuses either.

“We know the figures here present a realistic picture of what is really happening because the data is derived, on an anonymous basis, from employer payroll and HR systems and is used by employers to manage their pay budgets – so it has to be accurate.”

Despite the decline in growth of pay and bonuses, attrition among managers remains low, the survey found. Turnover was 4.8% in 2013, compared to 20% in 2010, driven by a spike in resignations.

Ann Francke, chief executive of the CMI, said: “Managers have been squeezed through the recession with cuts to their teams and increases to their workloads.

“This data shows more managers are staying put, and with the economy on the up it isn’t surprising that many are ‘jobtimistic’ about their prospects and looking to reap the benefits of loyalty to their employer. Having survived tough times, many will be keen to see the rewards of better times.”