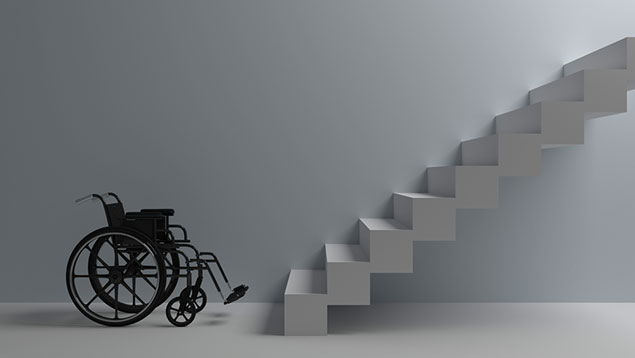 One of the first things that HR professionals, line managers and occupational health specialists should learn about disability discrimination is that the meaning of a “disability” under the Equality Act 2010 is much wider than the colloquial or dictionary definition of the word. We look at illustrations from the case law of the wide definition of a disability under discrimination laws.

While hay fever is specifically excluded from the definition of a disability (except where it aggravates the effect of another condition), a severe allergy such as a nut intolerance can come within the definition of a disability. In the tribunal case Wheeldon v Marstons plc, a chef who suffered a severe allergic reaction when he came into contact with nuts while at work successfully argued that his potentially life-threatening nut allergy was a disability.

Podcast: Can you recognise a disabled employee?

On XpertHR Weekly, senior employment law editors Jeya Thiruchelvam and Stephen Simpson break down the definition of disability set out in the Equality Act 2010. They also discuss the position in relation to specific conditions, including cancer, HIV and dyslexia.

Skin conditions can be a disability under the Equality Act 2010 if they have a major long-term effect on the sufferer’s normal day-to-day activities. In the tribunal case Glass v Promotion Line Ltd, the claimant was able to show that when her eczema is particularly bad, it has an effect on her ability to socialise, play sport and even leave the house. The tribunal was satisfied that she was therefore disabled.

UK law goes further than the law in most European countries, by making specific provision in the Equality Act 2010 for a person with the HIV virus to be deemed to have a disability (giving them protection against discrimination) from the point at which he or she is diagnosed as being HIV positive. In IB v Greece, the European Court of Human Rights held that a Greek employer breached the human rights of an HIV-positive employee who was dismissed as a result of pressure from colleagues.

Like the HIV virus, cancer is treated as a disability under discrimination law from the point of diagnosis, meaning that individuals with cancer are protected before the condition has any effect on their ability to carry out day-to-day activities.

Since diabetes can have a major effect on an individual’s eating patterns, employers may be required to make reasonable adjustments for a diabetic employee to help him or her control the condition – for example, by allowing the employee to take breaks at a particular time. In Clark v Newsquest Media (Southern) Ltd, an employer had to pay more than £25,000 for disability discrimination to a diabetic employee after a trainer suggest that she inject her insulin, which takes a matter of seconds and did not appear to bother any other colleagues, in the toilet.

There is nothing in UK law to prevent a phobia from being classified as a disability under the Equality Act 2010. However, the phobia would have to have a serious and long-term effect on the sufferer’s normal day-to-day activities. This was not the case in Pawlicka v St John and Red Cross Defence Medical Welfare Service, in which the claimant’s “necrophobia” (a fear of dead bodies or things associated with death) was found not to be a disability. The Government’s guidance on the definition of disability says that, while an “occasional apprehension about significant heights” would not be covered, agoraphobia – which can mean that an individual is unable to go out – could be classed as a disability.

The Equality Act 2010 (Disability) Regulations 2010 specifically exclude the following from constituting a disability:

In Browne v John Edward Crowther Ltd, the employment tribunal found the employer to be liable for taunts directed at an individual who suffered from a severe stammer, which was accepted to be a disability. When determining whether or not a condition such as a stammer is a disability, the employer should take into account coping strategies, such as avoiding using the telephone, speaking in large groups or going out socially with work colleagues. An employee’s ability to mask a condition does not prevent it from being a disability.

In Paterson v Commissioner of Police of the Metropolis, the Employment Appeal Tribunal held that a senior policeman who was diagnosed with dyslexia was disabled. Medical evidence suggested that he ought to be given 25% extra time in his examination for promotion to the rank of superintendent as a result of his (newly diagnosed) dyslexia. However, as the employment tribunal decision in O’Neill v Barnardo’s and others suggests, employers do not have to treat someone who says that he or she has difficulty with maths or reading and writing as having a disability unless he or she produces evidence that this difficulty is as a result of a disability.

Conditions that are intermittent, or that fluctuate in their effects, will entitle the person to protection at all times (provided that the condition is likely to recur), even if at a particular point in time the condition is dormant. Depression is a good example of such a condition. As employment tribunal case Rose v GK Group Ltd shows, this can be a particular issue in recruitment. In that case, a line manager was found to have harassed a job applicant after asking questions in an interview about his history of mental illness in an insensitive and hostile manner. It did not matter that, at the time of the interview, the interviewee had fully recovered from a “major episode of depression”.

Employers should also be aware that since the Equality Act 2010 came into force, legislation has provided that it is possible to commit disability discrimination against a perfectly healthy employee who has a relative who has a disability. Typically, this will be where an employer makes assumptions that an individual will become unreliable because of caring responsibilities for a disabled relative. For instance, in Price v Action-Tec Services Ltd t/a Associated Telecom Solutions, an employer committed “associative disability discrimination” against an employee who required time off because her husband was seriously ill with leukaemia.