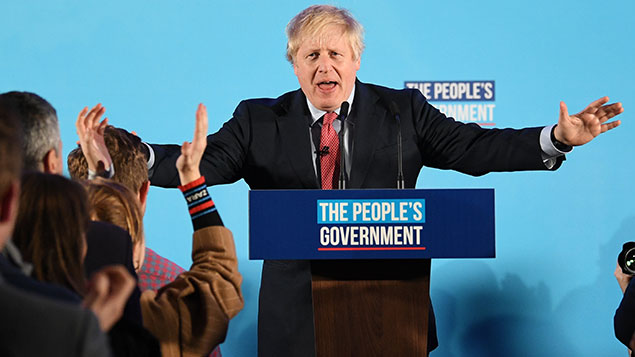 The Conservative manifesto was not a detailed or wide-ranging affair, which was perhaps to the party’s advantage in yesterday’s general election, but employment experts have told Personnel Today about their expectations and fears for the coming months and years under the new Tory majority. IR35, pensions, immigration and workers’ rights were among the initial areas of concern.

A Conservative victory means we are now likely to see extensive new powers given to the Pensions Regulator and new criminal offences for directors who fail to adequately protect DB schemes introduced sooner rather than later.

In their manifesto, the Conservatives committed to bringing back the Pension Schemes Bill that includes these new powers and offences, which are significantly wider than the industry expected. Directors of corporate sponsors of DB schemes and parent companies of groups with a DB scheme, along with investors in and lenders to such entities, will need to have immediate regard to these new criminal and regulatory sanctions on future corporate transactions, restructurings, re-financing and dividend payments.

Since the referendum, employers across every sector, and every region of Wales and the UK have found it increasingly difficult to find staff – including staff across every skill level from unskilled to highly-skilled. The onset of Brexit has only exasperated this for many, and has also impacted on the propensity of workers from outside the EU to consider coming to the UK for work.

Make no bones about it, any post-Brexit policy that determines which workers will be permitted to the UK that is based on salary or perceived skill levels is grossly inappropriate. This approach will have a serious impact on growth and productivity for individual businesses and the economy as a whole. Instead the authorities need to concentrate on ‘key workers’ required, and not segment people by arbitrary skill-levels or salary levels.

So, essentially, we must do what we can to ensure people across the world feel that they will be welcomed and valued here in the UK.

We do now need greater clarity from the newly elected Conservative Party on the UK’s immigration policy. Back in September, the Conservative home secretary asked the Migration Advisory Committee (MAC) to review how an Australian-style points-based (PBS) immigration system could be introduced in Britain to strengthen the UK labour market. But we’re still no clearer on how this new system would work in practice in the UK, and how this fits with the MAC’s much anticipated white paper review into minimum salary thresholds.

The new immigration system is also meant to be “fairer and more compassionate”, although the Conservative’s election manifesto stated that the immigration health surcharge will increase to as much as £800 per person per year, implying further increases from the £625 previously announced.

EU nationals’ access to benefits and housing will also be limited in line with non-EU migrants, while there has been much criticism of the new EU Settlement Scheme which was ignored by the Conservative Party’s election manifesto. The settlement application system will turn legally residing EU citizens into ‘illegal immigrants’ if they do not apply successfully by the 31 December 2020 deadline.

The new Conservative government should look to introduce a declaratory registration system through an Act of Parliament that would confer automatic rights to EU citizens currently residing in the UK to continue to live and work in the UK after Brexit. Hopefully this is something the Conservative Party will now consider so we don’t see scenarios similar to those with the Windrush scandal.

If the UK is to thrive after leaving the EU, it is vital the government works to ensure continued access to talent. With a tight labour market, many of the country’s vital industries heavily rely on skilled international workers to fill vacancies. As such, employers need to find more creative ways of attracting, retaining and motivating workers, to ensure their businesses are fighting fit and can weather whatever storms are heading their way. What we need moving forward is a change in mindset amongst UK businesses. The time has come to recognise that flexibility is no longer a ‘nice-to-have’ for UK employers – but a vital differentiator in a rapidly changing and challenging labour market.

Although not an immediate change, employers are waking up to confirmation that the National Living Wage will increase to £10.50 per hour by 2024, with the age threshold incrementally lowered to 23+ in 2021 and finally 21+ by 2024. The lead-in time to this change will enable employers to factor increase wage bills into their future budgets.

The view from the Institute of Directors

“The prime minister must resist the urge for arbitrary negotiating deadlines”

After years of parliamentary chaos, directors want to see a government that is clear-sighted about the challenges facing businesses, and ambitious, but realistic, in its response. British companies have been resilient amid the confusion, but they are eager for clarity.

Business leaders’ thoughts will immediately be turning to Brexit. For directors, “Get Brexit Done” will only have meaning once the details of our long-term future relationship with the EU are clear, they need a framework to plan for the future from. The prime minister must resist the urge for arbitrary negotiating deadlines, and should commit to a proper adjustment period that starts when businesses know the full detail of what changes they may be facing. Our members have made clear that the content and shape of any new deal are much more important than simply the speed in getting there.

On the domestic front, we must now see progress on the challenges that have been holding the economy back, from skills to infrastructure. Many directors will be waiting for action on manifesto commitments such as incentives for R&D investment and business rates reform. Meanwhile, there are still big question marks around the Conservatives’ plans on immigration and big-ticket infrastructure projects.

Employers will also have to review their leave policies, as more time off will be given to new parents of a sick baby. A keen eye should be kept on any changes to paternity leave as the party will look at ways to increase take up. With flexible working to become the default arrangement, employers may be forced to be more creative with working hours to ensure operational demand is still met. Working arrangements will also be impacted by a right for those with caring responsibilities to take time off.

With a promise to continue with the Good Work Plan which includes more rights for those in unpredictable work and to keep to the January 2020 Brexit deadline, it’s safe to say that employers will be kept busy over coming months and years.

While the new Conservative government will inevitably be focused on Brexit, we expect it to introduce some significant employment law changes. These include hiking the national living wage to a historically high level, widening its reach to the over 21s and, for the first time, requiring that a minimum service operates during industrial action in the transport sector.

Neil Carberry, chief executive of the Recruitment and Employment Confederation:

The biggest challenge to growth is skills shortages. The nation’s productivity hinges on government’s ability to address this. One huge opportunity is to open up the apprenticeship levy to the millions of people who choose flexible work. But for the sick to be treated, for homes to be built, and for food to be produced, the UK also needs an immigration system that meets employers’ needs for skills at all pay-levels – not just “the brightest and the best”.

Catherine Meenan, a barrister at Cloisters, and Joseph Lappin, of law firm Stewarts:

The Conservatives’ focus is on adapting families’ working lives to mirror changes workers have made to their lifestyles, such as making it easier to work flexibly. Their proposals are less radical than Labour’s, and in large part the Conservatives intend to stick to the status quo.

Labour’s policies on employment issues were more far-reaching than those of the Conservative party but, on the whole, both parties have outlined proposals that will strengthen workers’ rights. We think this is important in the context of the UK’s imminent exit from the European Union because the vast majority of employment law is derived from the EU.

IR35 must be reviewed

I’d like to remind Boris Johnson about his pledge to review IR35. Having a complex employment status test at the heart of the tax system hasn’t worked for 20 years under the intermediaries legislation and hasn’t worked under the new rules in the public sector either.

The off-payroll rules in their current proposed format create an unfairly burdensome scenario that has the potential to poison the entire engagement process between contractor, client and agency. It will force thousands of contractors into false employment, expose self-employed contractors to excessive taxation as well as depriving UK plc of essential access to talent and key skills and drive up project costs. Combined, this will work to further incite tax non-compliance and tax evasion.

I would urge the prime minister to now confirm he will conduct a proper review, put the off-payroll roll-out on hold and work with the contracting community and stakeholders on devising how best to recognise contracting and freelancing in the tax system. An off-payroll review should be put right at the top of his agenda as he takes up office again.

We are already seeing the very real impact of this damaging legislation [off-payroll rules] on businesses and thousands of professionals. If they don’t delay then the promise was nothing short of an arrogant and disingenuous move to secure votes. We have also learned today that the budget is now being planned for February/March which is simply too late for the off-payroll legislation to be properly implemented. Many businesses have already invested heavily in preparing for the changes, and given the legal requirement for reasonable care it is unrealistic to press pause for a potentially meaningless review to take place.  If the government wants to avoid utter chaos and shambles, businesses need clarity now.

I would also hope that the government uses its mandate to deliver on the Good Work Plan. One of the commitments was to regulate umbrella firms from April 2020 and we are yet to see any draft legislation and time is running out.  And, with many sham ‘umbrella’ firms opening up in business with the specific aim of cashing in on the off-payroll reforms it should be a priority for Mr Johnson, lest we will see a slew of tax avoidance schemes wreaking havoc once again on the lives of innocent people along the lines of what we have seen with the loan charge.

John Bell, founder and senior partner at licensed insolvency practitioners Clarke Bell:
We need a review into IR35 as a matter of urgency as the uncertainty is having a crippling effect on the livelihoods of many contractors as well as impeding hiring decisions by firms. We are already seeing an increase in the number of contractors turning to us for advice on closing down their limited companies faced with the concerns that the legislation will have on their work and careers.  Decisive action not platitudes is what is needed now.

Neil Carberry, chief executive of the Recruitment and Employment Confederation:
Few things matter more to people’s daily lives than the work that they do – the government must act now to underpin the jobs of the future. While we welcome the Conservatives’ promise to review the IR35 tax reform, it is wholly unfit for purpose and implementation must be delayed.