Analysis of ethnicity pay gap data has revealed that, on a like-for-like basis, white British people earn more on average than people from almost every other ethnic group.

The Ethnicity Pay Gap Report 2021, produced by PwC’s global consulting business Strategy&, analysed 2020 data from the Office for National Statistics and showed that while, on a basic level, the overall pay gap between white people and those from minority ethnic backgrounds has now closed for the first time since 2012, numerous imbalances remain when comparing people from different ethnic groups on a like-for-like basis.

Ethnicity pay gaps continue to exist across the UK, according to Strategy&, while separate research shows that the majority of people from minority ethnic backgrounds say they are treated differently than those who are white when applying for jobs.

A poll of 4,000 people in the UK, carried out as part of PwC’s Future of Government research, also shows that those from ethnic minority backgrounds are most likely to believe that the pandemic has exacerbated inequality.

However, respondents from ethnic minorities are more positive about the prospect of ethnic inequality being eradicated in the coming years, and younger generations are far more likely to want to do more to address the issue.

The report found that:

Sandra Kerr, race director at Business in the Community, said: “As we look toward a fair recovery, we can see that while many believe the pandemic has worsened racial inequality in the UK, they also are optimistic for the future. It is a sign of progress that more people believe that companies can play a part in stamping out inequality. But this optimism comes with an awareness that we cannot rely on employers alone.”

The survey found that six out of 10 people from ethnic minority backgrounds believe that people from other racial or ethnic backgrounds are treated differently when applying for a job than white people. Only 42% of white people taking part in the survey believed this to be the case.

Young people are almost twice as likely to take responsibility for tackling racial inequality, with 56% of 18-to-34-year-olds saying they personally want to do more to address the problem compared to 29% of over 55s.

Younger age groups also appear to be more hopeful that racial inequality will be eradicated in the UK, with 73% of 18-24 year olds expecting it to end at some point in contrast to less than half (38%) of those above 65. Four out of 10 respondents (40%) from ethnic minority backgrounds say they believe the inequality can be eliminated within 10 years compared to one quarter (25%) of those who are white.

Kerr added:  “This study has shown a greater drive for personal responsibility to stamp out racism. I’m heartened by the growing number of respondents who shared their belief that racial inequality will be eradicated in the next 10 years. The youth of today will be the decision-makers of tomorrow, and I take hope from their push for action, starting with a call for the UK government to implement mandatory ethnicity pay gap reporting. Their belief in our ability to make positive changes for the future makes me proud to push for action. As leaders, we must not let them down.” 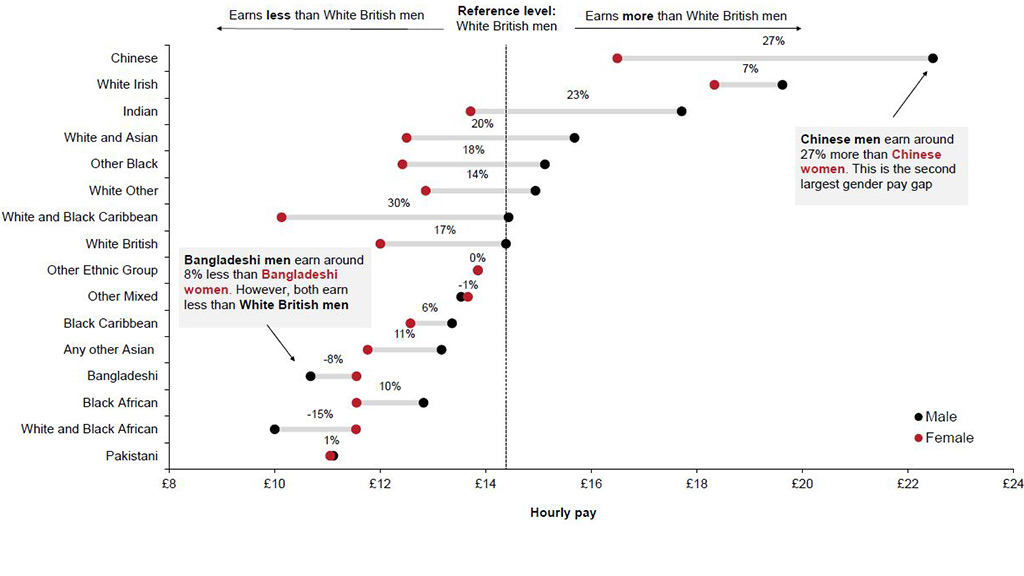 Karen Finlayson, PwC partner and regional lead for government, said: “These two studies highlight the divides not only in the perception but the reality of ethnic and racial inequality in the UK. The pay gap research underlines the extent to which workers from ethnic minorities across the UK are still earning less than their white counterparts even when they have the same qualifications and are working in the same jobs.”

The report also addresses how ethnicity pay differences interact with the gender pay gap, with white and Black Caribbean mixed race women on average earning 70p for every £1 earned by a white British man. In white and Black African mixed race, Bangladeshi, and other mixed ethnicity groups, women out-earn men by a small amount, although women in all of these groups still earn less than the average white British man.

Laura Hinton, chief people officer at PwC, said: “These findings emphasise the need for organisations to meaningfully report on ethnicity pay gaps, as well as on gender and social background. Meaningful reporting is more than data alone – it should also include a clear action plan, as that is how you drive and measure change.”

Nurses urge regulator to pull out of Stonewall diversity scheme

Should a ‘chief health officer’ be your next c-suite hire?

Ethnicity pay gap reporting will not be mandatory