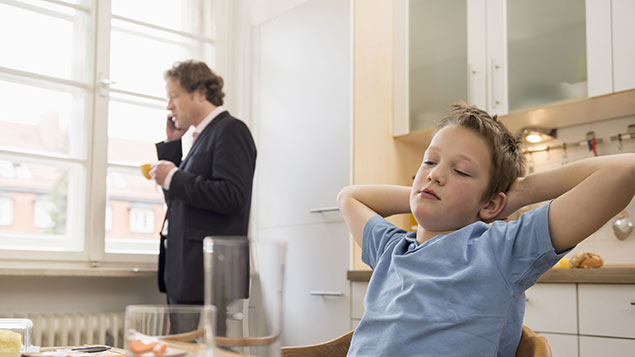 Fathers face a negative bias when seeking a better work-life balance or applying for part-time employment, a new study suggests.

The research at the University of Plymouth shows that fathers are more likely to face objections when proactively seeking an improved work-life balance, while mothers are praised for their dedication to the division of time and focus between work and family.

Jasmine Kelland, a lecturer in HR management who led the research, said: “In the UK, traditional patterns of employment and parenting are in decline, and the stereotype of fathers going to work while mothers raise a family [is] increasingly diminishing.”

Preliminary findings from an online survey included in the study indicate that when wanting to work fewer hours, fathers can face a “fatherhood forfeit”.

Around 100 managers completed the survey, which involved scoring fictitious job applicants who were equal apart from their parental status. Mothers scored 5% higher than fathers, despite having similar qualifications and experience.

The study also included focus groups and interviews in which the “fatherhood forfeit” was again apparent, with managers viewing fathers who wanted to work part-time with suspicion or considering them “deviant”.

If, as a society, we are to reach a position of equality for parents, it is crucial that modern workplaces address the issue of the ‘fatherhood forfeit’ to reduce the disparities that exist in the workplace.”

“In the context of these societal changes, a shift in the attitudes of employers is also required so that workers are treated fairly on the basis of their skill set rather than their familial choices”

In focus groups fathers said they felt they received less workplace support than mothers and had to make more of a case than female counterparts when wanting to work part time. They also reported often facing “‘Where is mum?’ discrimination”, feeling a loss of status and having friendship issues as a result of reduced working hours.

Kelland added: “If, as a society, we are to reach a position of equality for parents, it is crucial that modern workplaces address the issue of the ‘fatherhood forfeit’ to reduce the disparities that exist in the workplace.”