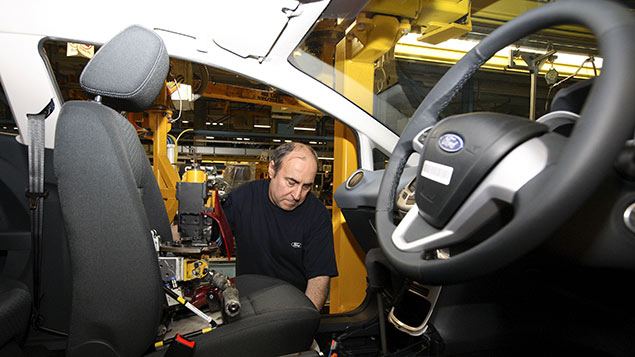 Ford's workforce in the relevant part of the business was 8.9% women in 2013. REX/Action Press

While the employment tribunal case in question relates to additional paternity leave, it will interest employers currently considering whether or not to offer enhanced pay during shared parental leave.

Shared parental leave regulations come into force later this year and mean that working couples with babies due on or after 5 April 2015 will be able to share leave and pay, provided each parent qualifies for leave and pay in their own right.

In the judgment in Shuter v Ford Motor Company, the employment tribunal in East London considered a sex discrimination claim brought by a male engineer at Ford who claimed he was unfairly financially disadvantaged during his five-month additional paternity leave period.

The claimant argued that he lost out on £18,000 because of Ford’s approach. Under the motor company’s maternity leave policy, female employees are paid 100% of basic pay for up to one year.

However, the employment tribunal accepted Ford’s evidence that its policies are part of a long-term plan to recruit and retain more women, who are under-represented in its workforce.

Ford provided the tribunal with proof of its reasoning for not enhancing additional paternity pay when additional paternity leave was introduced, as well as detailed statistical evidence supporting its case that it needed to increase female representation in its workforce. One of the ways for the company to do this was to offer female staff generous maternity pay. Ford’s workforce in the relevant part of the business was just 6.2% female in 1999, rising to 8.9% by 2013.

Stephen Simpson, senior employment law editor at XpertHR, said: “Although there are fundamental differences between additional paternity leave and shared parental leave, this judgment is a valuable example for employers that offer maternity pay over and above the statutory minimum, and now face the difficult task of setting their shared parental pay.”

Last month, XpertHR and Personnel Today released data on employers’ intentions, which showed that most employers did not know whether or not to enhance shared parental leave. Should they stick with the statutory minimum and risk sex discrimination claims from male workers later or enhance pay during shared parental leave, potentially a very costly move?

“In this case,” continued Simpson, “Ford’s carefully recorded reasoning provides a model for the detailed justification that an employer would have to provide if it chooses not to offer enhanced shared parental pay, and this is later challenged by male employees who feel that they are missing out. A test claim of this sort is inevitable once shared parental leave beds in, and you don’t want to be the employer facing that claim in a few years’ time.”

A detailed case report setting out how Ford justified its maternity and paternity leave policies is available on XpertHR.