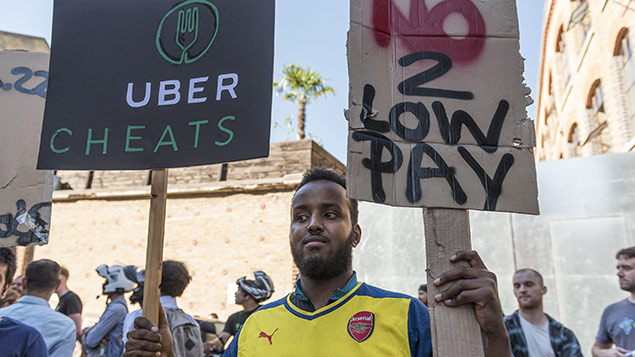 The law is being challenged by the gig economy business model to define and classify the terms “self employed” and “worker”. How far have the courts got in achieving this amid a welter of recent cases, asks Richard Isham, employment partner at Wedlake Bell LLP?

The essence of the gig economy business model is to be able to provide services to consumers at a competitive price. This is partly achieved by shifting the risk/cost of the service provision from the owner of the “platform” to those who actually provide the service – the cyclist, driver or tradesperson – via contractual arrangements that try to ensure that the service provider, who uses the platform, is classified as “self employed”, rather than as either an “employee” or “worker”.

Under English law, there are three categories of “worker”:

The tests that are applied to determine status are well established:

In recent cases it has become apparent that Uber, City Sprint, Deliveroo and Pimlico Plumbers had each created contracts that purported to ensure that their “partners” – the drivers, cyclists and plumbers – were classed as “self employed” which allowed them to avoid having to pay minimum wages, holiday and sick pay and also avoid liability for discrimination under the Equality Act 2010.

The court had no hesitation in finding that Uber was not simply a technology company, selling software to the drivers and passengers, rather it is a taxi business and the drivers are workers and not self employed.

The Employment Appeal Tribunal (EAT) confirmed that the issue at the heart of Uber’s appeal could be simply put: “When the drivers are working, who are they working for?” and in answering that question, agreed with the Employment Tribunal’s (ET) decision that they were working for Uber and not the passenger – indeed, Uber’s business model is such that the driver does not know the name of the passenger or his/her destination, until the passenger gets into the car.

Cycle courier Mags Dewhurst was found to be a worker and was entitled to the holiday pay that she was claiming. The contract that purported to classify Dewhurst as “self employed” was a sham and designed to mask the true relationship.

Although it expressly excluded any mutuality of obligation and also gave Dewhurst the right to use a substitute to provide the service, the reality was that, once the couriers were logged on to the company’s city tracker system, they were expected to be ready, willing and able to provide courier services when jobs are given to them by the dispatcher.

Dewhurst’s ability to substitute a third party to carry out the service was illusory as she had been trained to courier medical supplies and City Sprint could not risk their reputation by allowing another to carry it out.

This case is different and more complicated because of the legal argument – whether their couriers have the right to join a union and benefit from collective bargaining, a right that is enjoyed by employees and workers – and the forum in which the case was brought, being the Central Arbitration Committee (CAC) rather than an employment tribunal or court.

Deliveroo won before the CAC because the committee agreed with the company that its couriers were self employed because they were able to accept or decline jobs and, most importantly, they had the unfettered right to substitution.

In contrast to the Uber and City Sprint cases, the CAC found key differences in Deliveroo’s contractual terms with its couriers, namely that Deliveroo couriers could decide when they logged on to the app; that they could decline to do a job, even after they had accepted it (no mutuality of obligation) and substitute themselves with any other third party for any particular job (no obligation to provide personal service).

Deliveroo couriers, however, earlier this month won the right to appeal against the CAC ruling to decide effectively whether they could be reclassified as workers. I shall look at this in more detail below.

The Supreme Court declared this month that the ET, on the evidence before it, was entitled to conclude that Mr Smith was a worker and that PP were not his client or customer, so granting Mr Smith the “worker status” that he needs in order to bring his claims under the Equality Act 2010 for disability discrimination on account of his heart attack.

One may have thought that the union’s arguments for worker status in the Deliveroo case, would be strengthened, however, by the High Court, when granting leave to the union to have the CAC’s decision judicially reviewed.

But the High Court made this decision on very limited grounds. Very importantly, the court did not see any merit in the union’s arguments, based on the Supreme Court’s declaration in Pimlico Plumbers.

The fact that Deliveroo couriers have the unfettered right to substitute any third party to do the delivery appears to be the factor that allows courts and tribunals to find that, under Deliveroo’s business model and contracts, their couriers are self employed.

The Deliveroo model allows their couriers to refuse to do a delivery, even after they have accepted it, and gives them the unfettered right to substitute themselves with any other third party. This appears to be the way forward for gig economy “platform provider businesses” wishing to transfer the risk/cost of employment to the service provider, rather than incurring those employment costs itself. How realistic this is for all business models is questionable.

This being said, the issue of “worker status” will continue to be litigated because Uber is seeking to appeal to the Supreme Court, asserting that the Court of Appeal and lower tribunals failed to understand their business model.