Gore, nudity and leadership lessons: an HR guide to Game of Thrones 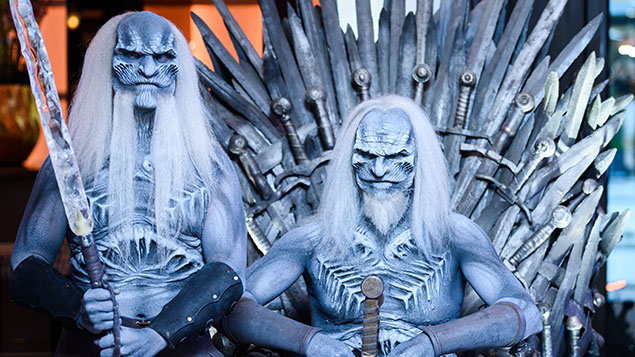 While the return of Game of Thrones is exciting for some, others who don’t watch it might feel excluded or will feel they have to give the show a whirl to see what the fuss is all about and to be able to offer an opinion. If they do, writes business psychologist and leadership specialist Stuart Duff, they’ll find that some of the characters have familiar traits – good and bad, but maybe more bad…

Leadership lessons from Game of Thrones

At its core though, Game of Thrones can be seen as a show about leadership. Specifically, the quest to climb (and remain) at the top of an organisational ladder.

Admittedly, plotting, poisoning, acts of extreme brutality and political posturing aren’t as common in the modern workplace as they might be in King’s Landing. And, certainly, morality, the rule of law and fairness aren’t strictly observed by this cast of reprobates, but nonetheless some of the personality types viewers come across are quite instructive. Let’s start with the show’s greatest survivor and hero…

When someone leads simply by meeting the needs of the team, they can be thought of as a “servant leader.” Much like Jon Snow, who was surprised to be nominated by his comrades to become the Lord Commander of the Night’s Watch and subsequently, the King in the North, servant leaders will lead by example. They exhibit high levels of integrity and lead with generosity.

These individuals will often achieve leadership positions as a result of their values, ideals, and ethics. With these traits, they will create a positive organisational culture and inspire higher morale among team members. Servant leadership is often most valuable in positions where leaders are elected to serve a team, organisation or community.

Transformational leaders are always seeking ways to improve their organisation, and to push their teammates out of their comfort zone. The Mother of Dragons, herself, could very well be considered a transformational leader. Though her ultimate goal is to win the Iron Throne, Daenerys empowers and helps people in need wherever she goes, and is determined to be a principled, compassionate, empathetic queen.

This particular form of leadership is great for motivating employees to push themselves. However, transformational leaders can sometimes risk losing sight of their teammates’ individual learning curves.

As illustrated by Cersei Lannister’s relentless, single-minded quest to rule Westeros, autocratic leaders make decisions without taking input from anyone around them. They will rarely consider the wellbeing of other people, and instead, will expect teammates to adhere to all of their decisions without question.

This is an incredibly destructive – and unsustainable – style of leadership, and most people who take this approach will ultimately alienate those around them. With Cersei continuing to build a long list of enemies as we enter the final series of Game of Thrones, and showing no sign of changing her ways, she is surely due a severe comeuppance.

Poor old Ned Stark, often thought of as the most honourable man in Westeros, didn’t survive the first series but is a perfect example of a democratic leader. This leader will always make the final call on a decision, but those decisions are based on the input and wellbeing of each of their teammates. His wife, sons and allied clan leaders all were able to advise him. However, he might have lasted a little longer had he listened more closely to Master of Whisperers Varys.

Democratic leadership is often regarded as one of the most effective leadership styles, because it allows lower-level employees to learn and exercise authority that they may to need to deploy in positions that they will one day hold themselves.

Task-oriented leaders focus solely on getting the job done, to the extent that they can sometimes show signs of autocratic behaviour. It’s little wonder, therefore, where Cersei learned her scheming behaviour. Task-orientated leaders, such as former Hand of the King, Tywin Lannister, will actively put rigid structures and plans in place to organise and monitor work. These leaders will also create and maintain high standards of performance for their teammates.

While Lord Tywin’s scheming and political manoeuvring led him to become one of the most powerful people in Westeros, task-oriented leaders often fail to consider their teammates’ wellbeing. This style of leadership can, therefore, fall victim to many of the same flaws as autocratic leadership, with motivation often dropping to very low levels among the people they lead.

Tywin’s style of dictatorial leadership and his brutal use of power risked sowing the seeds of his own demise, a risk he appeared utterly (and delightfully) oblivious of.

Stuart Duff is partner, head of development, at Pearn Kandola
View all posts by Stuart Duff →
Previous Article
Next Article