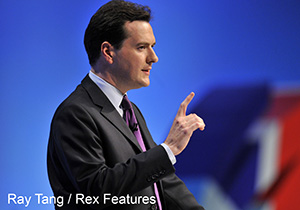 The Government today confirmed two key employment law changes, with Chancellor George Osborne announcing that the qualifying period for unfair dismissal claims will increase from one year to two and that a fee system will be introduced for employees who bring tribunal claims.

Speaking at the Conservative Party conference in Manchester, Osborne confirmed the changes that were originally announced in a government-published online document last week. However, after encountering accusations that the announcement had been made without a thorough consultation, it was subsequently described as a “drafting error” by the Department for Business, Innovation and Skills, which published it.

Osborne said that the Government was “ending the one-way bet against small businesses”, before confirming that the qualifying period for a claim for unfair dismissal will be that the individual must have been in the job for at least two years, rather than the current requirement of one year.

“We respect the right of those who spent their whole lives building up a business not to see that achievement destroyed by a vexatious appeal to an employment tribunal. So we are now going to make it much less risky for businesses to hire people,” Osborne said.

Osborne also outlined the fees that must be paid by employees who want to bring a tribunal claim against an employer. From April 2013, employees must pay £250 to apply for a tribunal, and must pay a further £1,000 if a hearing is granted. The money will be refunded if they are successful, but is forfeited if they lose. The Government has said that “poor claimants” will not have to pay, although there is currently no detail as to how a claimant qualifies as “poor”.

The fees have been introduced in order to reduce the number of what the Government has previously described as “vexatious” claims and the Government maintains that this change, together with the increase in the qualifying period, will result in 2,000 fewer tribunals each year, meaning a saving for business of £6 million.

Today’s announcement confirms what many commentators were expecting and has received a mixed response. John Philpott, chief economic adviser at the Chartered Institute of Personnel and Development, suggested that there is “questionable merit” in the changes, which the Government has said will help to boost economic growth by removing some of the risks involved with recruiting new employees.

Philpott said: “The vast weight of evidence on the effects of employment protection legislation suggests that, while less job protection encourages increased hiring during economic recoveries, it also results in increased firing during downturns. The overall effect is thus simply to make employment less stable over the economic cycle, with little significant impact one way or the other on structural rates of employment or unemployment.

“There is no evidence that UK employment suffered significantly in the 1970s as a result of the introduction in 1975 of a six-month qualifying period for rights against unfair dismissal, or that there was any substantial benefit when the qualifying period was subsequently raised to two years in the 1980s before being lowered to one year in 1999.

“In addition, it is unlikely that raising the threshold from one to two years will have its intended effect of reducing the number of employment tribunal claims because employees are increasingly bringing claims linking unfair dismissal with discrimination claims which can be made from day one of employment. ONS figures suggest that an extra 12% of employees would potentially be denied the chance to claim unfair dismissal due to length of service as a result of the change – hardly likely to make much of a dent in overall tribunal numbers given that only a small proportion of these would make any claim,” Philpott added.

Meanwhile, Darren Newman, employment lawyer at In Company Training suggested that the announcement hinted at further measures yet to be unveiled, and said that the introduction of tribunal fees might result in a significant new responsibility for the Government. He said: “The Government announcement of a two-year qualifying period for unfair dismissal was entirely expected. But employers’ groups are likely to lobby for changes to go much further than that. While to some extent the Government’s hand is tied in areas covered by European law, it is worth noting that unfair dismissal law is not based on any European Directive. If the Government wanted to achieve a fundamental change, then unfair dismissal law would be the most likely area for reform.

“As for the employment tribunal fees, this is going to create a huge new administrative burden for the tribunal system. Collecting fees from upwards of 100,000 people is no mean feat – nor is refunding those fees to successful claimants. The tribunal service is currently not set up to do this and considerable fresh resources would be needed to put the right systems in place.

“Presumably, the requirement to pay a fee will not be levied on claimants who are unemployed and cannot afford it. In which case, however, relatively few claimants will actually have to pay the fee. That’s the thing about people claiming unfair dismissal – they tend to be unemployed.”