By Jo Faragher on 18 May 2018 in Latest News, Sex discrimination, Dress codes 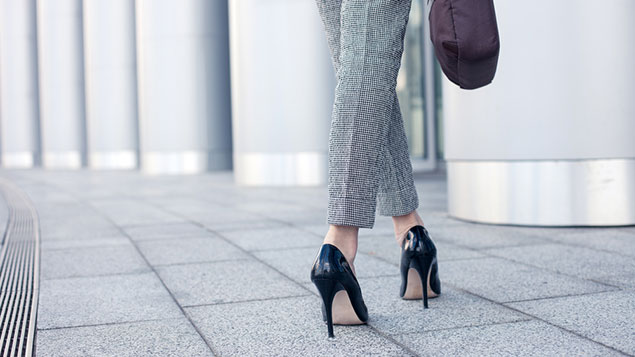 The Government today issued guidance for employers on how they can ensure dress codes are not discriminatory. They do not contain any measures to toughen up sanctions on organisations with discriminatory rules, however, and have been criticised by one employment law firm.

Can an employer have a dress code requiring female employees to wear a skirt?

Dress codes and discrimination: what you need to know, has been produced following recommendations made more than a year ago by the Women and Equalities Select Committee and the Petitions Committee.

An inquiry into employer dress codes was launched in 2016 after a receptionist working on assignment at PwC was sent home for wearing flat shoes.

Nicola Thorp, who had been told it was her agency’s “grooming policy” to wear two- to four-inch heels, set up a petition to make it illegal for companies to force employees to wear high heels, which received more than 150,000 signatures.

The two parliamentary committees then produced a report, High heels and workplace dress codes, including evidence from hundreds of women who had been forced to dress a certain way at work that made them uncomfortable or they felt was discriminatory.

The report called for the Government to impose stricter penalties on employers that enforced discriminatory dress codes.

It advises: “Dress policies for men and women do not have to be identical. However, the standards imposed should be equivalent. This means there must be similar or equivalent rules laid down for both male and female employees”, and that “it is best to avoid gender-specific requirements”.

It reminds employers that they can make reasonable adjustments to dress codes for disabled workers, and that “transgender employees should be allowed to follow the organisation’s dress code in a way which they feel matches their gender identity”.

It adds: “It is good practice when setting or revising a dress code to consider the reasoning behind it. Consulting with employees, staff organisations and trade unions may better ensure that the code is acceptable to both the organisation and staff. Once agreed it should be communicated to all employees.”

Beverley Sunderland, managing director of Crossland Employment Solicitors, said the guidance failed to fully address the recommendations laid out in the initial report, and was more like a “Janet and John” guide to dress codes.

She said: “When the Women and Equalities Committee published their report in January 2017 they concluded that the law was very uncertain when it came to enforcing discrimination claims in situations where workers were, for example, asked to wear make-up or high heels, and the technical problems of passing the ‘less favourable’ test.

“They said (para 12) that ‘The Government Equalities Office does not appear to have a grasp of whether employers understand and comply with anti-discrimination legislation when they are implementing dress codes’.

“They made a number of recommendations to combat this including reviewing and if necessary amending the Equality Act 2010, increased awareness campaigns at school level, detailed Acas guidance, increased financial penalties on employers and the ability to obtain injunctions to stop sexist dress codes.

“The response of the Government was that the law adequately protected women and the only recommendation they agreed with was that Acas should still draw up guidance – which is still awaited.”

She added: “The use of the words ‘it is best to’ and ‘likely to be’ reinforces the view of the Women and Equalities Committee, which had spent a lot of time talking to those who do have a grasp on whether employers understand, that the law was not clear enough.”