How the RAF can add wings to your HR career

With fantastic benefits and low costs for trainees, the RAF offers people an excellent opportunity to gain confidence and skills that will be transferable to businesses and organisations outside the armed forces. Personnel Today reports.

Many interested in joining the RAF are likely to have a vision of themselves flying or working on exciting high performance aircraft. They may have been to air displays and been thrilled by the Red Arrows and pleasingly deafened by Typhoon fighters or the F-35 Lightning.

But as with any large organisation, a vast support system is needed including those with high level people skills, with the HR function being a vital cog in the machine. Getting the right people interested in this, and recruiting the best, is an entirely different proposition for the RAF – because the job may involve hours in an office setting without sight or sound of the service’s thrilling frontline assets.

In very few organisations will HR staff – not usually known for their physical prowess – be needed to run 2.4km in under 14 minutes during their induction period or do sit-ups and press-ups in order to progress. But the basic recruit training course at RAF Halton, Buckinghamshire – once the selection process is passed – is for all recruits; it is not HR-specific. The purpose of the 10-week training period at this historic aerodrome is to introduce recruits to the military environment.

You may want to go to a particular place to work, but you are sent to different places that might not be your first choice. It’s important to us that we attract people who can maintain that commitment.” – Wing Commander Tim Mason

Each recruit will acquire parade drills, become fitter through participation in exercise sessions, learn to love early mornings, get involved in outdoor adventure trips and take pride in kit inspections plus be immersed in the RAF’s history, culture and traditions.

Although much of the activities will count as fun to a confident person the basic training is bound to come as a shock to the system for many. As one entrant advises on the Student Room website: “You will definitely be shouted at for something during the first few days. Don’t ever take this personally – learn from it and rectify it. Improvement is what these people are looking for all the time, they don’t expect ready-made airmen [or air women].”

The thought of a long, challenging period away from home may seem daunting for some. However, the opportunity to gain confidence, stronger self-discipline and qualifications is huge and the skill sets acquired are obviously transferable. 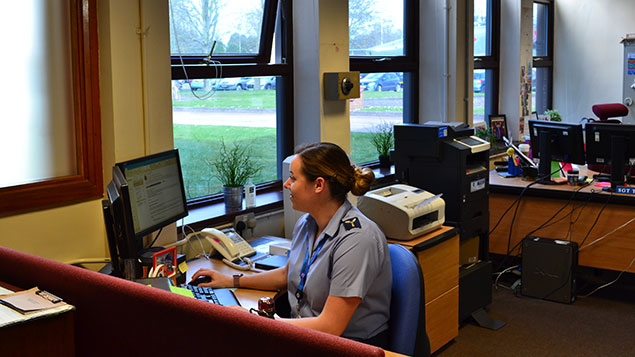 Then there are the benefits that can be dangled before those setting out on this career path: subsidised accommodation, free gym and swimming, adventure training opportunities around the world which can include skiing and sailing, six weeks’ holiday plus bank holidays, a good (non-contributory) pension, a social life on-tap… It’s fair to say the opportunities at hand are on a par with those provided by a university but without the expensive tuition fees and loans that hang over undergraduates. With a starting salary of £18,800 after training and given the rapid learning and benefits this must hold considerable allure for anyone looking for an interesting and fulfilling job.

After completing training at Halton, trainees will move on to MoD Worthy Down, near Winchester to commence their professional trade training. Here they undertake an eight-week specialist training course at the Personnel Administration Training Wing, studying personnel and HR administration in the UK armed forces. During their time here they are enrolled on an Advanced Apprenticeship, which includes a level 3 diploma in business administration.

Personnel Today was recently invited to RAF Cosford in the West Midlands, a large training establishment producing specialists in engineering, avionics, radio, photography and physical education, to meet some of the base’s HR staff.

With well over 1,000 trainees at the base plus a few hundred foreign students, the HR team is particularly busy dealing with salaries, transfers (all types of RAF personnel can be relocated at short notice to locations as diverse as Nevada, Cyprus, the Falkland Islands and Australia), disciplinary issues, accommodation logistics and complaints.

Head of training at the base, Wing Commander Tim Mason, acknowledges the need for people with adventurous characteristics to take on even office-based roles in the service: “You may want to go to a particular place to work, but you are sent to different places that might not be your first choice. It’s important to us that we attract people who can maintain that commitment.” 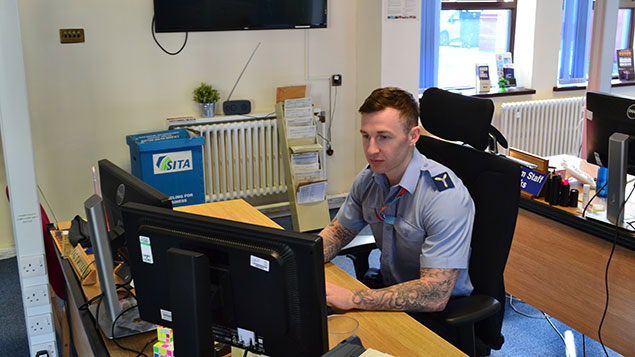 However, once settled, working life can become very “normal”. Squadron Leader Ema Bean, head of HR, for example, explains how she lives off the base, enjoying a civilian-style life, saying: “It’s a versatile role, you can be employed anywhere. There are lots of preconceptions – it’s a lifelong commitment and so on. When you are looking at entry level it’s important for people to know what it’s like as a lifestyle.

­“I have a normal life with my young daughter off the base – we aren’t living some sort of unusual life.” However, her next posting will be to sunny Cyprus, which she embraces with typical RAF enthusiasm: “I’m sure my daughter will enjoy the school there,” she smiles.

Harriet, in her early 30s, works in the disciplinary department at Cosford, which handles up to about five cases at any one time. This is a crucial part of HR in the forces, she says. Testing for recreational drugs use is particularly important and the department has seen problems with people getting into trouble after hours, because of the growth of a more nine to five attitude by some. 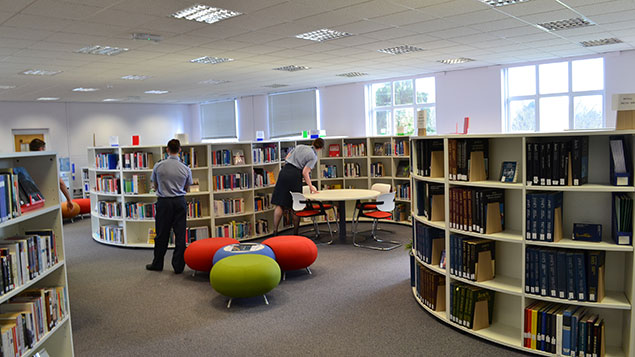 The library at Cosford

Route into the RAF

Harriet’s route into HR is a particularly interesting one. After a few jobs in her home town she successfully applied to join the Royal Navy. Her interest in cooking saw her become a chef, despite a psychometric test that led careers officers to advised her to consider HR.

She worked in the kitchens of frigates and destroyers for five years, travelling all over the world in her twenties. This was “a fantastic experience that did wonders for my confidence”, she says.

She saw an opportunity to finally take the career path the test had suggested and joined the RAF to pursue it; opportunities in the Navy to progress in HR were not open to her at that time. The RAF gave her the opportunity to gain her NVQ level three in business administration and to retake and pass her maths GCSE, something that could have cost hundreds of pounds in civilian life. “I was part of a small group studying for maths so I got really personal tuition that helped so much; something I never received at school,” she says. She subsequently also gained higher level English and ICT GCSEs thanks to the standard of teaching with the RAF.

Personnel Today found other personnel support staff had taken a circuitous route into the profession. Tom, who only applied to join the RAF after a friend from school gave him the idea, originally set out to become a physical training instructor. Tess was keen on a career in the services because of family connections; HR came to her because of her interest in business and psychology. She had recently been on an RAF skiing trip in Germany – something she says she would have been unlikely to do had she remained in civilian life because of cost. Her participation on the trip was reflected positively in her appraisal, Bean says. “She showed leadership skills and organisational skills that are very transferable if she was deployed at short notice.”

Some of the HR team are studying for a CIPD intermediate qualification (equating to level five on the Regulated Qualifications Framework), a degree-level grading. For Wing Commander Mason, professionalising the function within the RAF in this way is a key mission. He says: “The crux for us is about the professionalisation of the HR trade. The work is truly valuable but we don’t professionalise it enough in the RAF. Alongside all these great benefits we need to show we can give you level-five CIPD qualifications. 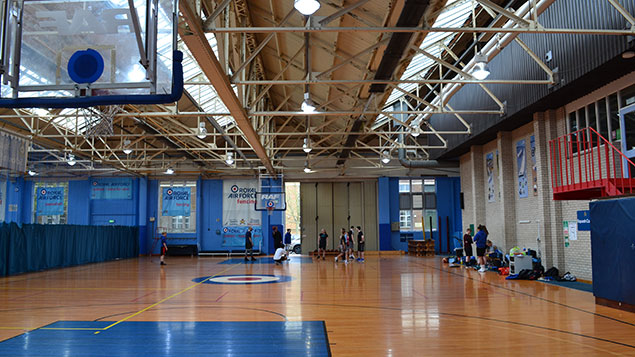 Sport and training is a large part of life for many RAF personnel, and facilities, like these at Cosford, are always of a high standard

“We need to do more mapping. CIPD is difficult and a big commitment. Professional development is promoted but it’s an area where we can do better in the HR realm. We need to get people down a recognised qualification route and show young people a path alongside their air force career. We need to show young people that once they leave they will be well qualified.”

I was part of a small group studying for maths so I got really personal tuition that helped so much; something I never received at school” – Harriet

Perhaps one area here that could be changed is the RAF’s use of its own terminology. HR workers are called “clerks”, a sign perhaps of traditions being hard to shift. “We may need to bring in more transferable HR terminology,” says the Wing Commander.

With flexible working being introduced where possible, mental health awareness training being rolled out and excellent learning and development opportunities, newcomers to the RAF’s HR team should feel that, career-wise, their skills and experiences will match up well with those available in the civilian world of work.

And with a variety of entry level roles that allow people to live in a wide variety of locations, earn enough to save money and enjoy a vast range of benefits and opportunities, having to commit to three years (post-training), wear a uniform at work, stay physically fit and remember to salute and say “sir” and “ma’am” will not appear much of a hardship.

Certainly the young people Personnel Today met on base didn’t think so and the place itself exuded the atmosphere of a university more than a military base.

Soldiers and officers to be trained in sexual...

How the Army Mediation Service is advancing on...

IR35: What does public-sector HR need to know...

Covid-19 testing to be targeted at staff unable...