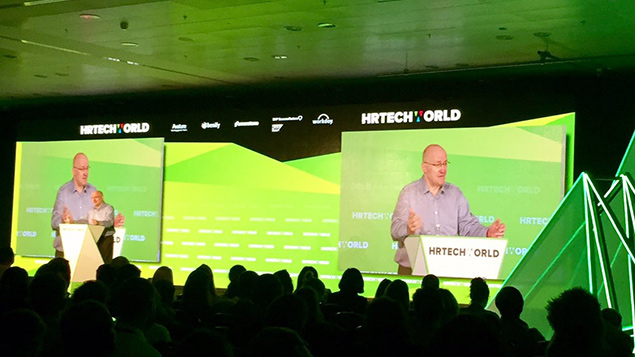 Economist Dr Daniel Thorniley brought yesterday’s HR Tech World conference to what he acknowledged was a “brutal, sombre and miserable”, albeit entertaining, conclusion.

Billed as a closing keynote on the implications of Brexit, Thorniley, president of DT-Global Business Consulting, described the economic circumstances that he felt had led to Brexit. This included numerous statistics that painted a grim picture for employment.

He explained that the UK, Europe and the global economic, political and corporate system have never recovered properly from the financial crash of 2008.

“The austerity programmes, combined with the perception of uncontrolled migration, ripped out the heart of Europe, and was the fundamental cause of Brexit,” he said.

He added that most business are struggling to obtain good, sustainable, top-line organic growth, and that too many companies were short-termist.

“Short-termism is the cancer of the corporate world,” he said, describing buoyant stock markets since Donald Trump’s election as a product of the US president’s policies around deregulation and lower taxes.

“This is helping US companies’ bottom lines, but it is not helping the global consumer,” he noted.

Thorniley went on to describe how Henry Ford used to pay his workers more to help generate demand for his cars. “Ford knew what your CEOs have forgotten; your employees are consumers.”

In previous recessions, said Thorniley, individuals that were made redundant would find their way back into the corporate world, perhaps initially to a less ideal job, but back on to the recovery cycle of the economy.

He explained that this time, millions of people in the UK, Europe and America have not returned to the formal economy. He offered numerous statistics to bear this out:

Turning his attention to HR, Thorniley said that HR should not be another function like legal or tax: “It should be at the centre of business and corporate development.”

However too many businesses had a short-termist approach. “Companies do invest in HR but they don’t show the loyalty and the sustainability to their staff.”

Brexit has created a “tremendous amount of uncertainty. You know that and I know that”. But Thorniley warned that anyone who believed that a trade agreement would emerge in the next two years’ negotiations, triggered next week by Article 50 was “with Trump – you’re in cuckoo land, honestly. It’s going to take longer than two years”.

“I don’t care what Boris Johnson says. Sometimes he’s a fool. The idea and concept that we can fall out on WTO agreements after Brexit would be disastrous for the economy, for HR, for employment, so I don’t think it’s going to happen.”

“For HR, hope for the best, but plan for the worst,” he concluded.