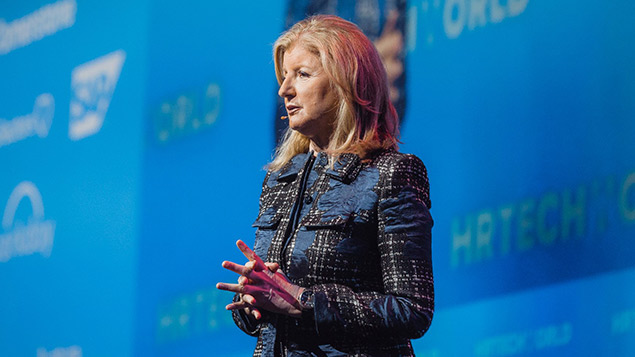 Last week’s HR Tech World conference in Amsterdam unveiled some of the latest thinking on HR technology trends, but keynote speaker Arianna Huffington also had a message on the benefits of switching off.

It was perhaps ironic that the keynote speaker at this year’s HR Tech World conference in Amsterdam wanted to share the importance of switching off from technology.

Arianna Huffington, founder of the Huffington Post and now heading up a business called Thrive Global, was the first to acknowledge this, saying: “We’re here to celebrate everything new in technology: artificial intelligence, machine learning. But we need to set boundaries with technology before we can unleash productivity.”

Huffington argues that rather than focusing on augmenting reality and living through screens, we should aim for something she calls “augmented humanity”.

Culture is a company’s immune system, and any time that culture is undermined, it will affect behaviour and the bottom line.” – Arianna Huffington

Her company has developed an app, called Thrive, that allows users to switch off from their smart phones and enter “thrive mode”, whether that’s to spend time with their families or concentrate on an important piece of work.

If someone sends the user a message while they’re taking time out, it replies to say they’re in thrive mode. She hopes people will be as proud to share this as their status as they might for a Facebook or Instagram post, and so this will gradually nudge us away from our ‘always on’ culture.

She added that an important role for HR in the coming years will be teaching people resilience and to be comfortable with change, not just new skills. “It’s hard to teach someone to be a coder if they don’t want to be turned into a coder,” she said.

Companies also need to turn around the “cult of the top performer, the brilliant jerk who poisons the whole atmosphere and culture of the company”, added Huffington.

“Culture is a company’s immune system, and any time that culture is undermined, it will affect behaviour and the bottom line.”

Also appearing at the event, Oracle announced the initial findings of some research it has completed in conjunction with Engage for Success.

“It’s the zone of contentment and pseudo engagement we need to worry about – and this won’t show up in engagement surveys,” explained Andy Campbell, Oracle’s HCM strategy director.

These are people who are either working within their comfort zone (in the case of contentment) or “playing the game” (pseudo-engagement) and are the employees that are least likely to go the extra mile for their employer, he added.

Oracle and Engage for Success are now working on psychometric tests and diagnostics around their findings so employers can identify strategies for moving workers from one model to another. The full research is due out next March.

Data as a service

In terms of HR technology investment, data and what to do with it continues to be a priority, according to Cristina Goldt, vice president for HCM products at Workday.

The company has announced a new product known as ‘data as a service’, which draws on the vast volume of data produced by the 26 million workers who reside on Workday systems globally.

I think the future of HR tech will look more like an iPhone than a single platform that does everything.” – David Ludlow, SAP SuccessFactors

“Because we have so much data there is a richness of insight that can fuel transformation,” explained Goldt. “Companies can benchmark against others using Workday and use these insights to support them with decisions around learning, leadership and talent management.”

He said: “I think the future of HR tech will look more like an iPhone than a single platform that does everything.

“Employees use technology like [Amazon] Alexa at home and expect a similar experience at work – they want to be able to access things from one device and don’t care that apps or systems look a bit different.”

Finally, HR Tech World announced a major rebrand of its conference series; it will now be known as Unleash.

Marc Coleman, founder and CEO of the popular event, said the idea behind the new brand was to “engage with the people that are making big differences in the world of work, creating communities that enable disruptive workplace innovation and learning”.