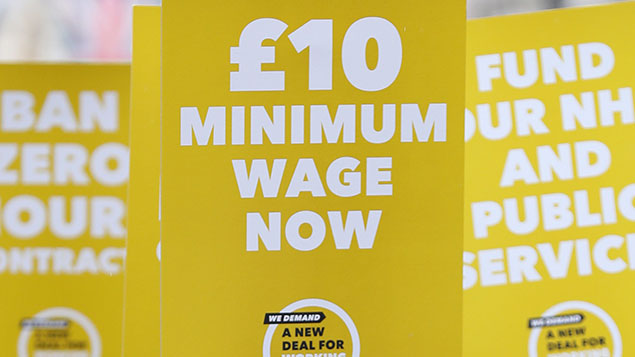 UK workers risk being subjected to 19th-century working conditions if the balance of power is not reset between employers and their staff, according to the TUC.

There will be more economic inequality and more people will be in insecure jobs if there is not decisive action on increasing wages and improving collective bargaining, the union federation organisation has stated. It has called for a £10 national minimum wage and a ban on zero hours contracts as a way of redressing that balance.

“There are 3.7 million people in insecure work, nearly two million (1.85m) self-employed people earning less than the minimum wage and workers still facing the longest pay squeeze for 200 years,” it says, claiming that the share of economic output going to wages has fallen to 49%, compared with 57% between 1945 and 1975.

At the same time, union membership and collective bargaining coverage have fallen to 23% and 26% respectively, compared with 54% and 70% of workers having access to this support in 1945-1975.

The TUC argues that increasing the number of workers who can be covered by collective bargaining is the most effective way to raise wages and improve conditions.

In its report, A stronger voice for workers: how collective bargaining can deliver a better deal at work, it favours a similar model to New Zealand, where unions are allowed access to all workplaces to tell employees about the benefits of union membership.

The union also calls for new rights to make it easier to negotiate collectively on issues not just around pay but also other issues such as workload or family-friendly rights.

The TUC adds that mandatory joint bodies should be set up in different sectors for unions and employers to negotiate pay, conditions and training, starting with low-wage sectors hospitality and social care.

TUC general secretary Frances O’Grady said: “We’re at risk of going back to 19th-century working conditions. Millions of workers have no control and no voice at work, with increasing numbers stuck on low pay, zero-hours contracts, and in sham self-employment.

“We urgently need to reset the balance of power in our economy and give people more of a say about what happens to them at work. We know that collective bargaining is the best way to raise wages and improve conditions – so let’s expand it across the whole workforce.”