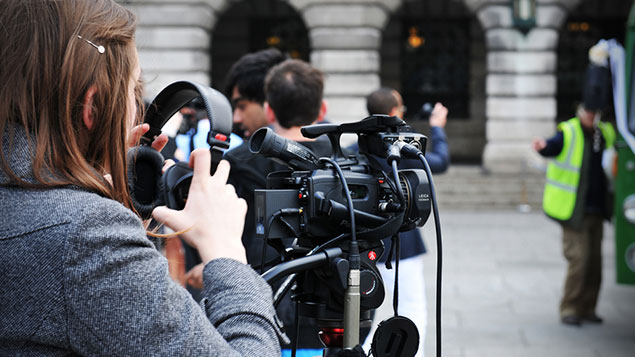 Media organisations have set their sights on improving the gender balance of staff
Photo: Shutterstock

Much of the furore over the gender pay gap has concerned the messenger itself, with the BBC, as a public body, being under particular scrutiny. Despite relatively high proportions of women, pay imbalances have endured at media organisations, but their publication may be the trigger for cultural change as many signal their intention to launch 50:50 recruitment.

Of the major national newspaper groups, the widest gender pay gap was at the Telegraph Media Group with a median hourly pay gap of 23.4% and mean of 35%.

Telegraph chief executive Nick Hugh branded the figure “unacceptable” and said: “Women should have the same opportunities as men. It is not only right for society but for the success of our business.”

Pretty disheartening to discover the Telegraph’s gender pay gap is 35 per cent. Nearly three quarters (73 per cent) of the most senior staff are male and 63 per cent of the most junior are female. Hmm. https://t.co/a4SWs9Xk3G

The group has made a commitment to encourage flexible working in a bid to increase the proportion of women to return to work after maternity leave and will also introduce 50:50 gender split shortlists for all vacancies. Pay and bonus awards will now also be more strictly monitored.

The Guardian fared better with a median pay gap of 12.1%. Editor Katharine Viner echoed the Telegraph’s approach by announcing a plan to achieve a 50:50 gender balance in the top half of the organisation within five years. She said: “GNM’s gender pay gap is lower than the current Office for National Statistics average, but that is not good enough and we aim to reduce it further.”

Notably, women at the Guardian received an average 74% more than men in bonuses, which were mostly awarded to sales staff.

Of the large circulation papers, News UK, which owns The Sun, The Times and Talksport, recorded an overall median hourly pay gap of 22%, a significant but not large gap when compared with the worst offenders in other sectors of the economy. At The Sun, the gap was 19.6%, and 12.7% at The Times.

News UK chief executive Rebekah Brooks, in response to the figures’ release last month, highlighted the organisation’s efforts to hire more women into digital roles often regarded as a male preserve, adding: “I have always felt that News UK is a meritocracy and I want people to be promoted on the basis of their ability.”

DMG Media, which owns the Daily Mail, Mail Online and Metro, has a gap of 15.4%, but at Mirror Group Newspapers the figure is 20.7%.

The National Union of Journalists was critical of Mirror Group owner Trinity Mirror, whose portfolio also includes the Daily and Sunday Express, Daily and Sunday Star and OK!, particularly in view of the pay rise awarded to chief executive Simon Fox.

Chris Morley, Trinity Mirror NUJ coordinator, said: “It is deeply ironic that on the day that Trinity Mirror declared a near 20% income boost for its male chief executive, it also published information showing women in the company are paid on average 18% less than their male colleagues.”

Among publishers with the widest gaps were Conde Nast, with a mean of 37% and median of 23%, and the Economist Group (32.5% and 29.5%). The former company’s publications include Vogue, Tatler and House & Garden and its high numbers came despite there being a higher proportion of women in its top pay quartile than many other firms.

Chief operating officer Sabine Vandenbroucke said in response: “Across three quarters of the business there is no evidence of an appreciable gender pay gap. The report does reflect a gender pay gap in the top quartile which is influenced by the senior leadership team, many of them of long standing at the company.”

As 63% of the top quartile are women this means that the 37% who are men have greatly skewed the figures.

Of the major UK television broadcasters and production companies, Channel 4 had the widest median gender pay gap at 24.2%. It said there were almost twice as many women than men in the lower two quartiles (68% in the lowest quartile and 62% in the second lowest), which pulled down the average female earnings across the business.

Production company ITN (which includes Channel 4 News, ITV News and Channel 5 News) reported a gender pay gap of 18.2% (compared with the much larger BBC’s 9.3%). ITN chief executive John Hardie has said he will “not receive a penny” in bonus pay unless he hits new targets on “strict” gender and diversity objectives alongside existing financial ones.

Sky followed closely behind ITN with 17.5%. Its UK chief executive, Stephen van Rooyen, like other industry leaders, announced plans to achieve a 50:50 split in senior roles by 2020, adding: “As with many big organisations, we have more men than women in senior, digital and technology roles and this is what is driving our current gender pay gap. When we achieve gender balance across these areas our gender pay gap will be eliminated.”

Another wide gap was recorded by Global Radio, which has a portfolio of commercial stations including LBC, Heart, Capital and Classic FM employing around 1,200 staff. Its median gap was 20.5% with a high mean of 34.5%. Men account for 64% of its top pay quartile.

Some media organisations revealed negative pay gaps; among them was NWN Media (recently acquired by Newsquest) unveiling a -85.2% median differential and the Evening Standard -5.8%.

Reaction to the figures

Michelle Stanistreet, NUJ general secretary, said the overall figures “make for very sober reading. They show the benefit of having greater transparency in order to combat unfair wages and the exploitation of women in the workplace. The act of companies being forced to reveal the true respective positions of men and women in their workforce has shed a light on pay inequity, a scourge in the media industry.”

However, there was also some resistance to the idea that the industry has an inequality problem from within, with some commentators describing the gender pay gap as widely misunderstood and misleading. Among them is the editor of The Spectator (owned by the Barclay brothers who also own Telegraph Media), Fraser Nelson, who has written that the gap is largely a myth.

Another Spectator contributor, Institute of Economic Affairs news editor Kate Andrews, in a Sky News segment on 2 April, told Stella Creasy MP that the #PayMeToo campaign was misguided and that the gender pay gap was the result only of bad data.

She said “We need to roll back these pay gap measures because they haven’t revealed anything meaningful” and accused Creasy’s campaign of “falsely conflating” mandatory equal pay with the gender pay gap. She also added on Twitter this week that the reaction to the gap’s publication showed that the “buck stops with the government – was mass hysteria its intention?”

According to Office of National Statistics figures the information and communications sector employs 880,000 men and 367,000 women. Ofcom reports that women account for 48% of employees across the five main broadcasters with Channel 4 having the highest proportion of women (59%). Viacom UK has the highest proportion of women in senior management (48%) followed by ITV (42%).