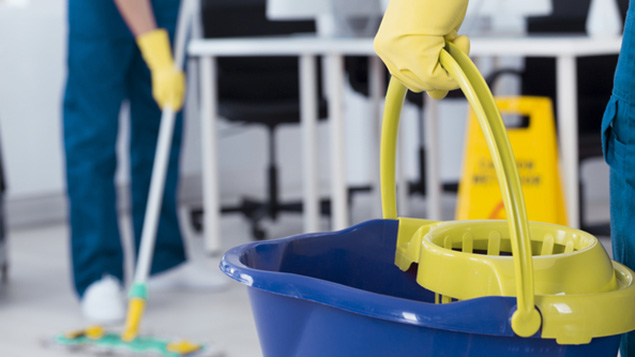 The outsourcing company ISS faces protests today over changes to its payroll system that will see it withhold the pay of thousands of workers.

ISS workers include security guards, porters and caterers at a number of prominent private sector employers and NHS hospitals. The payroll upgrade will mean that staff are paid one week later than they are currently. The money owed will be paid to them when they leave the company.

The GMB union has organised a “day of action” today at south London hospitals, while the RMT union has urged action by cleaners working for the company on its Arriva Rail North bus contract.

ISS employees at the Royal Liverpool University Hospital and Broadgreen Hospital said they had been informed at the end of March of the changes to the payroll cycle, known by management as ‘Project Greenfield’.

Their next new pay date will be 9 May, when they will have worked for three weeks but only been paid for two weeks.

One employee said: “To think that ISS has at some point had a meeting and decided to take a week’s pay off low-paid staff and keep it is beyond despicable morally.”

Colenzo Jarrett-Thorpe, national officer for health at the Unite union, which is also supporting the action, said: “Without proper consultation this multi-billion pound company is withholding the pay of hard-working cleaners and security guards. Many workers who live from pay cheque to pay cheque are struggling to make ends meet and will face genuine hardship as a result.”

In a statement, ISS responded: “Currently we operate 15 different pay cycles, which is complex to manage. To prepare us for the transition to the new payroll system, from 9 May we are moving to just one fortnightly pay cycle and one monthly pay cycle.”

“A range of loan options are available to suit individual circumstances, with repayment options from eight weeks up to 30 weeks. Local managers are having proactive one-to-one discussions with their employees to ensure that our people receive the financial and emotional support to meet their specific needs. ISS will not withhold any money that is payable to any employee.”

The GMB union is also campaigning to get the NHS hospital contractors – many of whom are on zero-hours contracts – the day-one sick pay rights that their salaried colleagues have.

She said: “The list of injustices being meted out against ISS workers by their managers appears to be endless and relentless.

“ISS has no regard for the wellbeing of its workforce and it is beyond belief that low paid workers can be expected to pay back loans in excess of £300 a month of their own wages so that a multi-million-pound global company like ISS can change their pay cycles.”