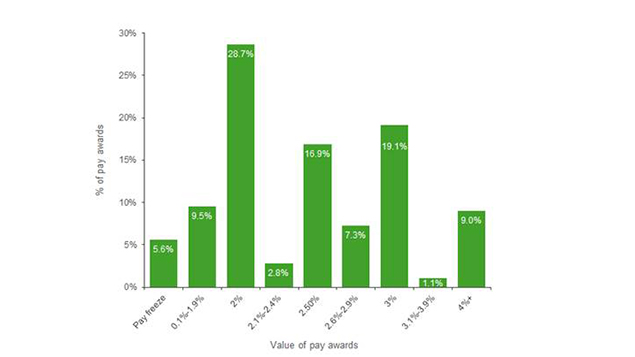 Employers predict that pay awards for 2019 will remain at the same level as in 2018, according to analysis by XpertHR.

Private-sector employers expect to give employees a 2.5% pay rise this year, the same level of pay award that was recorded throughout 2018. This will be the same for both manufacturing and production and service-sector employers.

XpertHR suggests that uncertainty over Brexit and record high employment has influenced the lack in upward movement in pay awards, although only 4.4% predict a pay freeze this year. There are also hints that some employees may have to wait beyond their normal pay review date as employers delay decisions on pay until they assess the impact of the UK’s departure from the EU.

Almost one pay award in 10 is forecast to be worth 4% or more. Where there is upward pressure on salaries, this is often down to benchmarking against competitors, recruitment and retention issues, and inflation, according to XpertHR.

That said, more than half (55.3%) of employers are taking steps to control wage costs. Some savings are expected from resourcing, with leavers not being replaced (cited by 25% of organisations) or through redundancies (14.4%).

Direct financial savings are most likely to come from reducing overtime or overtime payments (16.3%) and awarding a lower pay rise than normal (13.3%).

In the three months to the end of February 2019, the picture was very similar, with a 2.5% median basic pay award across all employers in the sample.

Within this, the middle half of pay awards were worth between 2.1% and 3%. A slim majority (36.5%) of pay awards among a matched sample were higher than those the same groups of employees received a year ago. Just under a third (32.8%) were the same, while 30.7% were lower.

Private sector services employees enjoyed a 2.7% median increase in pay awards in the same three months. In the public sector the median award was 2% in the 12 months to the end of February.

“This time last year we were heralding the increase in the XpertHR headline measure of pay awards from 2% to 2.5%,” said XpertHR pay and benefits editor Sheila Attwood. “Based on the pay activities of employers so far this year and the increases planned, 2.5% looks set to be the benchmark pay award across the economy for 2019.”