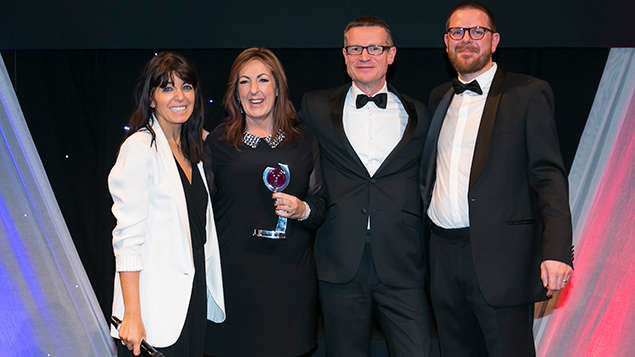 Anita Walton-Tilly received the much-coveted HR Director of the Year prize, sponsored by Monster, at the 2015 Personnel Today Awards ceremony on Monday night. Here we profile her winning entry, and those of the runners-up.

Vaultex is the UK’s leading cash processing company. It processes approximately 40% of the UK’s cash requirement. Vaultex employs 2,000+ people across multiple sites in the UK‎.

Vaultex operates in a highly regulated, competitive global market. Due to the risk-averse nature of the business and the industry, the company had no external presence and an outdated business model. It needed a public image that attracted and engaged a multi-skilled modern workforce whilst balancing the risk appetite of our shareholders. Furthermore, in 2011, only 56% of people felt engaged, so a shift in perception was needed.

“A demonstrable shift in performance was shown, using good metrics and an understanding of not just what Anita did but why and how she did it. There is a clear linkage to the business strategy and to the needs of all stakeholders.”

About the organisation
Dundee & Angus College is a further education and higher education college in Dundee, Scotland. It has two main campus sites in Dundee, one in Arbroath and learning centres across the Angus region.

HR Director of the Year – the judges

Helen oversaw a major organisational change after Angus and Dundee Colleges merged to become a “super-college” in 2013. The two colleges had very different backgrounds and approaches, and the merger took place against a backdrop of significant funding cuts.

“[Helen] handled a very difficult situation with dignity and grace and led by example.”

The University of Sheffield is a world top-100 university renowned for its excellence, impact and distinctiveness in research-led learning and teaching. It employs around 7,200 staff.

The university needs to stand out in a global, highly competitive environment that is experiencing rapid change, funding challenges and calls for greater efficiency and effectiveness. Andy needed to introduce a culture where staff are empowered to deliver excellence and impact across the employment agenda.

Excellent delivery of the basics and lots of evidence of innovation and true business partnership.

First Great Western’s (FGW) services cover one of the largest and most complex rail networks in the UK, carrying 1.5 million passengers every week on 9,000 services, and calling at 276 stations. It is part of First Group, which during the last year served 2.4 billion passengers.

When Sharon became HR Director at FGW in 2011 she found an HR team of five struggling to support more than 4,000 colleagues following cost cutting in 2008. The team only reported on operational KPIs and had no capacity to act on business imperatives or demonstrate their value. She needed to assert the importance of effective HR alongside operational business needs.

“I was really impressed with her business contribution and drive to meet the long term goals of the business through a sustainable people agenda.”

Dorchester Collection is a hotel management company with a passion for excellence, honouring the individuality and heritage of its portfolio of 10 iconic hotels. Its mission is to deliver the ultimate guest experience through a highly talented team of 4,000 employees.

Prior to Eugenio’s arrival, each hotel had individual HR functions which independently focused on their own business priorities. While engagement was relatively high, it was inconsistent and measured in an arbitrary way. In 2011, Eugenio was appointed VP of People and Organisation Development, where he was tasked with the significant change of centralising HR with just 1.9% of turnover budget.

“This submission demonstrated strong business outcomes driven by the leadership of Eugenio and he has obviously got the support and admiration of many people in his business.”

L&Q is one of the UK’s leading housing associations and one of London’s largest residential developers. It owns or manages more than 70,000 homes in London and the South-East. It also provides other services for residents, such as managing their homes and investing in local communities.

L&Q must constantly adapt to keep up with the external challenges from budget cuts to changes to government funding. During the last few years, L&Q has undergone change and restructuring. This included a review of its customer facing operation, and improvements in customer service, as well as a trial to move away from using external contractors to provide maintenance directly.

“I was impressed by Tom’s ability to continue to bring new ideas and approaches to his business after 15 years.”

Compass Group is a market-leading provider of catering and facilities management services. It operates across a variety of sectors, offering a range of services from cleaning to security to serving meals. It has around 60,000 employees.

When Fiona took over as UK & Ireland HR director in 2013, she needed to refocus the function on supporting the business, rather than “telling or doing to” the business. She designed a people strategy to meet these needs based on: making sure the company is never short of good people; developing leaders people want to work with; building effective people structures; rewarding outstanding performance and making it easy to do the people stuff.

“Fiona has implemented a series of initiatives to align HR with the business and to transform the HR department. She has had an impact of bottom line results and sorted out the issues facing Compass HR.”