Hannover Re takes premium prize in Award for Health and Wellbeing 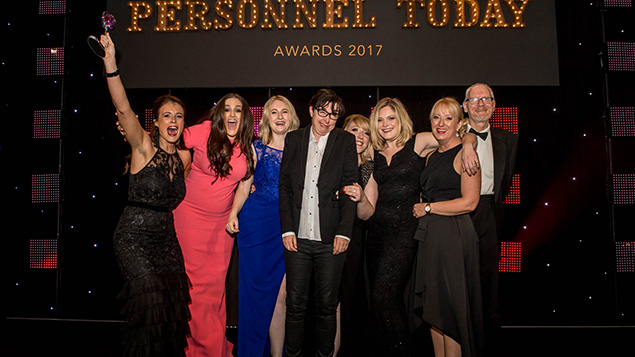 The Hannover Re team celebrates winning the Award for Health and Wellbeing in 2017.
Photo: Ed Telling

By detailing the success of its management development schemes designed to improve wellbeing, reinsurance giant Hannover Re won over the judges at the Personnel Awards 2017 in a field that included many strong contenders. The category was sponsored by Occupational Health and Wellbeing.

Between 2013 and 2015 Hannover Re underwent major change resulting in structural change and redundancies. The HR team became aware of a disengaged workforce and a lack of coherent HR policies and procedures.

A comprehensive review of people policies and procedures was undertaken. The company introduced an absence monitoring database, an occupational health service, free flu jabs and improved the absence reporting and return to work procedure.

Leaders supported a wellbeing week in February 2016 with a budget of £3,000 across branches. Participation rates were high and feedback excellent. A health and wellbeing strategy progressed throughout 2016, focusing on physical, emotional and financial wellbeing strands. A permanent homeworking policy using technology was introduced, as many employees were travelling over two hours each way to and from the office.

In the 2016 HLRUK engagement survey, scores for the statement ‘This is a psychologically and emotionally healthy place to work’ increased by 13% since 2014 (2014 54% v 2016 67%). Ninety percent of respondents to the wellbeing week pilot survey agreed that it had positively contributed to the working environment. Two-thirds of respondents agreed that their work-life balance had improved.

In 2015 Arbuthnot Latham, a private bank, in response to a staff engagement survey the same year, introduced a health and wellbeing programme.

Throughout 2016, the following initiatives were launched: improvement to company sick pay; introduction of a counselling helpline available 24/7, 365 days a year; group income protection for all staff; education of managers to promote flexible working and to hold regular absence reviews; and a range of new health benefits.

Eugene Farrell: qualified in radiotherapy, health economics and psychology and has more than 30 years of experience in the UK healthcare arena.

HR worked with the internal communications manager to ensure staff were engaged. This included regular communications from the CEO, weekly health tips and encouragement of wellbeing at staff conferences.

As a result of attending a wellbeing workshop, 88% of attendees said they would make positive changes to their diet and implement new practices to improve their wellbeing.

An academic study on workplace stress was developed with benefits company AXA, the University of Surrey and health-tech business, BioBeats, with 21% of the workforce. This involved 560 participants using a wearable device monitoring HRV (heart rate variability) and other biometric measures over a two-month period.

Key managers are now targeted regarding mental health if negative patterns arise (using anonymous data). A full-time OH advisor has helped reduce the severity of incidences. Between 2013 and 2016, inpatient and day-patient usage reduced by 50%, giving a 60% cost reduction.

Other benefits included a reduction in insurance claims from 13 in 2013 to just nine in 2016. The strategy harmonises pension schemes and benefits providers achieving savings of c.£2.7m.

Department for Work and Pensions

The Department for Work and Pensions employs 84,000 people in 930 locations. A new employee deal has changed the terms and conditions of most employees, ensuring a flexible workforce which is available at extended times of the day and weekend. The DWP needed to strengthen the workforce’s resilience to cope with change while also continuing to reduce absence.

The ‘Working Well Together’ (WWT) strategy was designed and delivered in four months, focusing on awareness, education, prevention and early intervention. The DWP collaborated with the CIPD and Business in the Community to develop an offer that fits with busy working and personal lives. This includes bitesize learning products on digital channels, a 24/7 Wellbeing Zone, accessible from home to ensure the strategy reached people equally.

DWP also appointed a disability, health and wellbeing champion at executive team level; grew its advocates network by 800%; and dinfluenced the joint DWP/DH Disability Health and Work ‘Improving Lives’ green paper by being an exemplar employer.

The People Survey engagement scores increased by 12 percentage points, with happiness up by eight percentage points and anxiousness down by 24 percentage points. Occupational health and employee assistance programmes have helped reduce average working days lost by five days. Manager satisfaction levels stand at 98% for the EAP and 95% for OH. 30,000 employees are using DWP’s bespoke Wellbeing Zone.

Mayflower Theatre has 97 permanent and 130 casual staff. The challenge for the wellbeing strategy was to support the welfare of diverse staff where many roles are physically demanding with unsociable hours. All employee benefits were brought under one umbrella ‘Mayflower Active’ and an employee wellbeing strategy was introduced in the 2015-16 business plan with targets agreed through staff consultation.

Leaders allowed an annual budget of £4,000. A Mayflower Active page was created on the intranet with information about clubs, links to wellbeing resources. Other interventions included health checks, workshops on nutrition and diet, a pedometer challenge, sports, a staff choir and walking club.

Quarterly themed social events are held on Fridays where all staff are invited to come along, chat, and play games. Fridays are also ‘no internal email days’ and people are encouraged to talk with their colleagues. Ambassadors across different departments volunteered to co-ordinate activities.

Sickness absence has been reduced, while take-up of health benefits has increased. Over 76% of those who completed one of the company-wide surveys actively want to take part in one or more of Mayflower Active wellbeing activities and over 61% thought that events like the pedometer challenge can improve wellbeing. Ninety-four percent of those who attended the health checks would recommend this type of activity to their colleagues.

Sandwell and West Birmingham Hospitals NHS Trust was among the 93% of Trusts that experienced a shortage of nurses in 2015. With 7,200 staff serving a population of 530,000, the Trust faces the challenge of recruiting and retaining staff and tackling escalating spend on temp staff, as well as improve staff morale. In 2014 the Trust launched the “2020 Vision” roadmap with a mission to “become renowned as the best integrated care organisation in the NHS.”

The core challenge was how to communicate with frontline staff, with 74% of workers spending 80% of their time away from their desk and PCs. Because so many staff spend time away from desks, it was important to communicate through physical flyers and posters as well as digitally. A launch event was held in 2016 with 1,000 attendees, where 300 staff were vaccinated in a single day.

The Trust appointed 150 communication champions who visit wards, clinics and departments, enabling people to sign up to the benefits portal there and then.

The organisation uses agile working practices enabling 90% of employees to work when and where it suits them using technology. The board recently approved an integrated safety, health and wellbeing strategy with increased focus on health and wellbeing.

The 2016 employee engagement survey indicated that 84% of employees believe that SW takes their personal wellbeing seriously and overall levels engagement have increased since the 2013 survey. SW won the 2016 Scottish Insider Fair Employer of the Yea award partly due to this approach.

The WellPoint kiosk at one of SE’s most frequented offices has 3,767 users with 4,242 assessments undertaken last year.

Virgin Money is a UK retail bank with a philosophy that aims to make ‘Everyone Better Off’. In 2012 Virgin Money acquired Northern Rock and in November 2014, the company was floated on the London Stock Exchange, transforming it from a small, privately owned company with 400 colleagues to a listed business with 3,000 colleagues.

The company has established an ‘Affinity Group’ to give strategic direction for promoting diversity and inclusion. Flexible working encourages colleagues to work from home one day a week where possible.

The company has trained 22 health champions who hold a nationally recognised qualification in mental health awareness. All colleagues, including leaders, regularly share their own experience of mental health issues via the intranet.

The company has developed an app called Away From Work. For colleagues absent due to long-term sickness. It can be challenging to gauge the appropriate level of contact, particularly where mental health issues are involved, and the app is a way for employees to feel connected and stay informed.

Virgin Money has an overall engagement score of 81%, which benchmarks strongly against UK high-performing companies. Absence rates have fallen and are consistently below 3% and industry average. Stress is tracked as a reason for absence and is down to single figure per cent within a reduced overall absence rate.