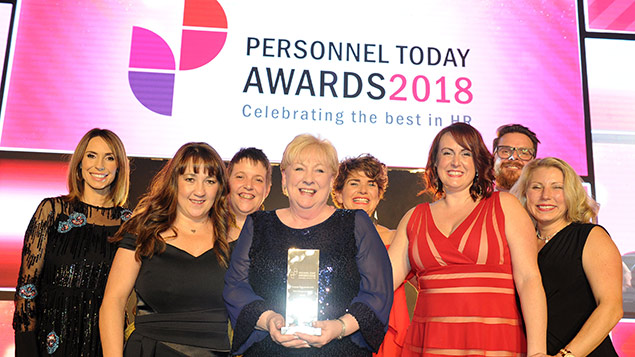 The Johnsons Apparelmaster team collect their Talent Management Award at the Personnel Today Awards 2018. The One Show's Alex Jones is on the left; Personnel Today editor Rob Moss is right, rear.

The Talent Management Award at the Personnel Awards 2018 was scooped by workwear provider Johnsons Apparelmaster, which impressed the judges with its dedication to career progression and development. Each of the runners-up also demonstrated innovative and rewarding development plans.

Workwear supplier Johnsons Apparelmaster recognised that it needed to create a real buzz around the career progression and development opportunities it offered, because it knew the laundry and workwear sector was not likely to be a career aspiration for many.

Inspired by its CEO Peter Egan, the company’s youngest ever CEO who began as a temp on the shop floor, it launched The Johnsons’ Academy; a year-long talent development programme to nurture employees’ skills in leadership, project management, communication, personal effectiveness and presentation.

Applications were reviewed by the company’s board and senior management team to identify the best candidates. The first Academy had only 12 places, so acceptance onto the scheme was viewed as receiving the “Johnsons Golden Ticket” by staff, but subsequent programmes have had 40 places.

The projects had to be completed alongside their usual role and candidates received a timescale, budget and access to internal resources to help them complete their project. The programme involved piloting new ideas; surveying staff and customers; developing relationships both internally and with suppliers; and learning to work across a wide geographical area. Their ideas were then presented to the board 12 months later.

Seventy per cent of Academy members received a promotion within 18 months of completing the programme and many claimed it had helped improve their confidence.

Recognising that it was in short supply of the leaders it needed in an increasingly competitive market, BT wanted to identify and develop senior staff with the skills that would “re-imagine” its customer, employee and shareholder experience.

Its “ReImagine” talent programme was born, with the aim of ensuring that talent and succession reviews feature regularly in its board agenda and developing those with the skills required to become future leaders.

It identified 60 staff with senior leadership and executive committee potential. Each business area was asked to nominate candidates, with an emphasis placed on diversity. The candidates were then evaluated by HR directors and representatives from across the business.

Candidates are also given access to board members to help them understand the requirements of a BT leader. Of the staff who have taken part, 12 have moved into roles that will accelerate their progression to senior leadership level. Six staff, including three women, have become senior leaders.

As part of its ambitions to become a £2.3bn company by 2025, DPD – one of the UK’s largest parcel delivery businesses – needs to create at least 196 new shift managers in the next five years to keep pace with its rate of growth.

To do this, it developed a “summer camp” for its self-employed owner drivers, allowing them to switch to employed status and train to become a frontline manager, responsible for overseeing the work of 30 delivery drivers each.

Candidates are selected depending on how well they meet nine criteria – which include their performance, coping with pressure, planning and organisation and coaching skills – before they are given a place on the three-week programme.

The summer camp has three phases – classroom training, shadowing a shift manager and managing a selection of drivers – and each driver is supported by a mentor.

The first summer camp received 140 applications, 62 of which were successful. It said 24 are now shift managers, with a further 22 waiting for a suitable vacancy to arise. One has progressed into an operations manager role, overseeing a number of shift managers.

Before 2013, IT company Fujitsu did not have a dedicated scheme to recognise and develop talented engineers, though it had done in the past.

To improve retention, increase networks and enable personal development, it relaunched its Fujitsu Distinguished Engineers (FDE) programme with heavy support from its CEO and CTO.

It aims to recognise talented engineers through a celebratory awards ceremony at its annual conference, develop networks by running quarterly events attended by up to 250 FDEs across EMEIA and Americas regions, and offer the chance to support business initiatives through internal and customer-focused innovation challenges.

They can take part in training around softer skills, contribute and review papers as part of its annual whitepaper competition in Japan and participate in special interest groups.

Line managers are given the opportunity to nominate a person suitable for the programme, taking into account their technical ability, external reputation and whether they could be considered a role model. The applications are then reviewed by a board of “Fellows”, who have been appointed to give technical direction to the programme, while candidates’ place on the programme is reviewed on an annual basis.

Currently 204 FDEs have been appointed across 11 countries. Fujitsu has seen 21% less attrition, saving £150,000 in recruitment costs, and female representation in the FDE community has increased from 3% in 2015 to 7.3% in 2017 through various targeting initiatives.

In 2013, the Royal College of Nursing discovered that a third of its most senior employees were approaching retirement age. While recruiting new staff was an option, it thought creating a pipeline of existing workers who were ready to fill any leadership roles that arose was the right approach to take.

Its Future Leadership Programme (FLP) was developed with the aim of reducing the impact of recruitment challenges; offering tailored personal progression; developing managers to deliver a better working experience for their staff and upskilling its people.

Candidates are assessed on attributes including assimilation of complex information; entrepreneurialism; aspiration to develop; influencing, negotiating and relationship-building; communication skills; and consideration of the objectives, people and corporate dimension of business decisions.

Feedback is collated by an occupational psychologist and is used to determine whether individuals will progress onto its Transformational Senior Leadership Programme – a scheme offered by the Hult International Business School.

FLP participants are supported in developing a personal learning plan, allowing them to take ownership of their own progression. They can then take advantage of internal and external coaching, mentoring, secondment and project work opportunities.

Of the 35 participants over the past five years, 13 have secured a promotion. The scheme has also contributed to reductions in cost per hire.

A challenger to the Big Four accounting firms, management consultancy The Berkeley Partnership claims is it able to attract and retain the best talent, despite offering no bonuses, no sector specialisms, no promotion structure and no sales targets.

It suggests it is able to do this as its relatively flat structure means that partners are able to engage with consultants on a daily basis, providing them with opportunities to stretch themselves, learn and develop their career.

Each consultant is assigned a “listening partner” to discuss the challenges they face when working on a project and any development needs they may have. They are also encouraged to set up their own peer mentoring arrangements, generally someone who has been in a similar position, so advice and support can be offered.

Consultants are also given a “personal development partner” who will review their development every six months. They can also complete a “bite-sized MBA”.

Partners undertake a two-year coaching accreditation scheme so they are able to offer confidential coaching to staff. Sixty per cent of the workforce have had, or are currently having, internal coaching.