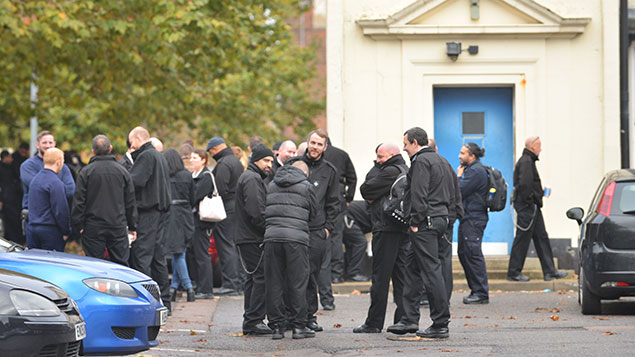 Prison officers’ protests outside jails in England and Wales have been called off by the Prison Officers’ Association after prisons minister Rory Stewart withdrew the threat of court action against the union.

An estimated 5,000 prison staff had assembled at facilities to protest against the rise of violence experienced by staff working with inmates. The trigger for the action was a letter by the chief inspector of prisons Peter Clarke to secretary of state for justice David Gauke warning of the need for emergency measures over dire conditions at HMP Bedford where assaults on staff and drug use are among the highest in the country.

Stewart had earlier today called prison officers protesting outside jails across England and Wales today “irresponsible” and described their actions as illegal.

According to Steve Gillan, POA general secretary, up to 5,000 members working in prisons had complied with the union’s request to protest outside their workplaces.

Under the 1994 Criminal Justice and Public Order Act the POA is banned from calling for strike action. Despite various voluntary and procedural agreements in the 2000s replacing the ban, the POA called its first national strike for prison staff in England and Wales in August 2007, leading then justice secretary Jack Straw to reintroduce the provisions of the 1994 Act.

Last year, following POA protests in November 2016 that it said did not constitute a strike, the High Court granted a permanent injunction restraining the POA from inducing officers to take part in “any industrial action”.

Gillan called off today’s action shortly after 1pm today following a meeting with Stewart. He said: “We have reached an agreement with Rory Stewart. They [the government] will discontinue the application for an injunction against the union.”

He added: “I’m pleased with the outcome. Well, in actual fact I’m saddened we had to do it in the first place. But now we hope for meaningful, constructive dialogue commencing on Monday.”

Earlier he had said officers had the right to walk out under health and safety legislation. “The government and employer have a duty of care toward my members, and I’m fed up of hearing of my members receiving smashed eye sockets, broken arms, broken legs, broken jaws, being attacked, spat on, having excrement and urine thrown at them, and enough is enough now. We need ministers to start taking control of what’s going on.”

A spokesman for the POA said the legislation banning industrial action made officers feel like “modern day slaves”. He added: “We are barely allowed to sneeze without being threatened with a court injunction.”

The POA said it had now received a commitment to instruct the Prisons Service to meet with it and agree a course of action to address its concerns. The union stated it would engage with the employer to agree a “timebound plan of action”.

Gillan concluded after the latest meeting: “We must take things on face value following the meeting with the Minister but the devil will be in the detail. The POA will not allow our members to suffer in silence. The employer must be prepared to meet our demands and provide safe prisons.”