Only one in three understand what the gender pay gap is

Almost two-thirds of the British public incorrectly identified what the gender pay gap is and confused it with the issue of unequal pay, a YouGov survey has found.

Just over a third (35%) of men knew the correct definition, compared with 24% of women. Seventy per cent of women and 58% of men believed the unequal pay definition was the correct answer.

Men aged 18-29 were the most likely to understand what the gender pay gap is. Thirty-nine per cent chose the correct definition – the highest proportion of any age range among both men and women. But women in their 30s were least likely to know, with only one in six (16%) understanding correctly. 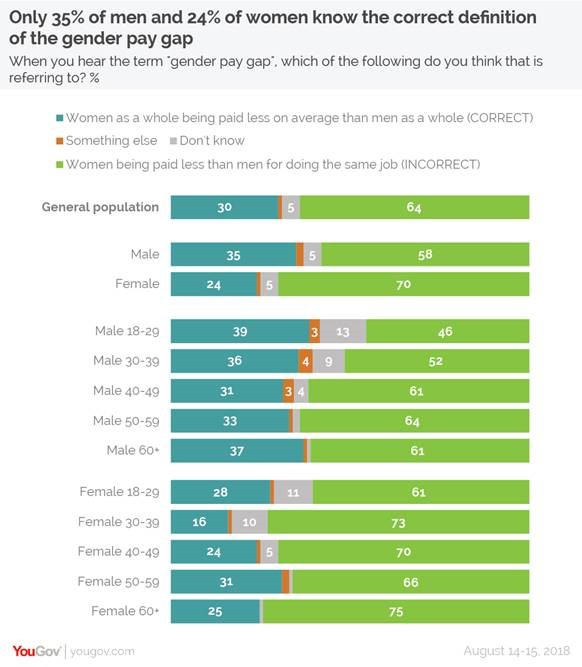 YouGov associate research director Tanya Abraham said: “The lack of understanding of the gender pay gap, and how it differs from equal pay, presents an obvious issue for campaigners seeking to address the issue. Where equal pay is illegal and easy to spot, the gender pay gap is a more subtle problem relating to everything from increasing take-up of shared parental leave to dismantling gender stereotypes around different types of work.

“While the former is simply a matter of workers’ rights, the latter requires effort from government, employers, but also education and civil society to tackle. If gender pay gap campaigners seek to make progress, one of the first things they need to ensure is that everyone understands the challenge at hand.”

In August, the Business, Energy and Industrial Strategy committee claimed that only half the UK workforce is covered by the current gender pay gap reporting requirement and suggested its remit should be widened to include organisations with 50 or more staff. Only those with 250 or more employees are currently covered.

But research by Willis Towers Watson found that UK organisations were ahead of their global competitors in terms of addressing the disparity in male and female pay. Fifty-eight per cent of UK employers took gender pay equality into account when making decisions about base pay, compared with 23% of companies internationally.

Ashleigh is editor at OHW+ and HR and wellbeing editor at Personnel Today. Ashleigh's areas of interest include employee health and wellbeing, equality and inclusion and skills development. She has hosted many webinars for Personnel Today, on topics including employee retention, financial wellbeing and menopause support. Prior to joining Personnel Today in 2018, she covered the road transport sector for Commercial Motor and Motor Transport magazines, touching on some of the employment and wellbeing issues experienced by those in road haulage.

I am not surprised by this. When this issue was first raised I frequently heard journalists on the news explaining the term ‘gender pay gap’ incorrectly – I think there is a lot if misunderstanding out there.

Half yet to publish as gender pay gap...