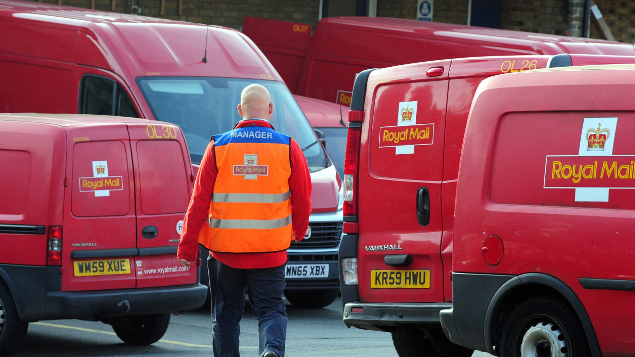 Hundreds of Royal Mail employees with free shares in the company have lost money because of a dramatic fall in its share price.

On 1 October, the privatised company issued a profit warning, after which the value of its shares fell by 28%.

Around 145,000 staff were each given 613 free shares when the company went into private ownership five years ago.

Many had decided to sell them today because it is the first date they can do so without paying tax or national insurance – but they estimate they have lost about £850 each thanks to the drop in share value.

The shares are currently trading at 341p, just 11 pence above their original flotation price of 330p. Last year they reached a peak price of 632p.

The affected workers claim that Royal Mail issued the profit warning deliberately, in the knowledge that many would soon sell their shares. Royal Mail said it had no choice.

“Our members certainly believe it’s just been done to deflate what they would get if they sold their shares,” said Terry Pullinger, deputy general secretary of the Communication Workers Union. He added that many postal workers had already spent the money in anticipation of a windfall.

A Royal Mail spokesperson said: “We were very disappointed that we had to issue a trading update last week. We know and understand this is disappointing for those colleagues who had been planning to sell some of their free shares. But we have to comply with stock market disclosure rules, which required us to make an announcement as soon as possible.”

In October 2013, the government sold around 60% of the Royal Mail via a share flotation on the London Stock Exchange. It claimed the funds raised from selling off shares would enable the organisation to become more competitive in a fast-changing delivery market.