Small firms to be given £1,500 to hire first apprentices 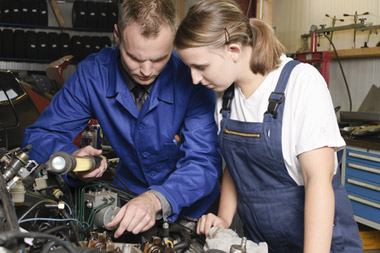 Small businesses will be offered £1,500 to take on their first young apprentices, as part of a government drive to boost apprenticeship numbers.

To coincide with National Apprenticeship Week, Prime Minister David Cameron today announced a round of government funding to support organisations that take on apprentices, including an incentive for small firms to take on 16- to 24-year-old apprentices.

From today, businesses will also be able to bid for a share of the £6 million Higher Apprenticeship Fund and for part of the £250 million available from the Employer Ownership pilot, in which employers will be funded to design, develop and purchase vocational training programmes.

Today’s announcement follows a further rise in unemployment among those aged between 16 and 24 last month, which brought the total number of unemployed young people to 1.04 mllion – 22.3% of that age group.

However, according to data released by the Department for Business, Innovation and Skills at the end of January, there was a 64% increase in the number of people starting apprenticeships in 2010/11 compared with the previous year, with growth taking place across all age groups.

The Prime Minister said that the Government was committed to strengthening the economy by helping employers take on apprentices.

He said: “By making apprenticeships a gold-standard option for ambitious young people, we are sending a message that technical excellence is as highly valued as academic prowess. And by focusing investment where it is most needed to deliver sustainable growth and offering real ownership of vocational training to employers, we are equipping businesses with the skills they need to rebalance our economy and distribute opportunity more widely.”

However, the Chartered Institute of Personnel and Development (CIPD) warned that small firms that take on apprentices because of the incentive may need support in order to deliver a worthwhile programme.

Katerina Rudiger, skills policy adviser at the CIPD, told Personnel Today: “In terms of the incentives for small firms, they are a good idea; however, we are obviously concerned about quality issues. The idea is to incentivise employers that haven’t really thought about taking on apprentices, but these businesses need to be supported in developing and running and designing these programmes to make sure they are beneficial for everyone involved.”

Keep up to date with the latest news and guidance during National Apprenticeship Week with our employer’s guide.