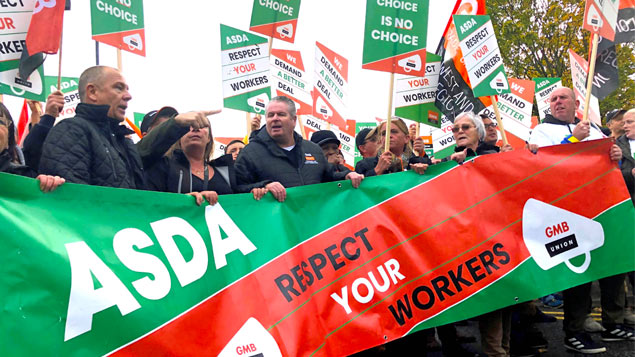 Thousands of employees at Asda face dismissal next month if they refuse to sign a contract that will require them to work flexible hours and lose paid breaks, it has been reported.

The supermarket chain is requiring all retail staff to agree to a controversial new contract that will increase base pay from £8.84 to £9 per hour plus any location or bakery premiums, but introduce unpaid breaks and the requirement to work on “some” bank holidays.

Asda said that moving staff onto its “contract 6” would provide a pay increase for more than 100,000 employees.

However, according to Sky News, around 12,000 Asda employees are yet to sign the contract. If they do not do so by 2 November they face dismissal.

An Asda spokesperson said the “overwhelming majority” of retail employees have signed the new contract, but did not comment on how many had refused to sign or how it would resource its stores if hundreds leave.

Staff protesting against the imposition of the contract delivered a petition to Asda’s head office in Leeds yesterday. The petition, organised by the GMB union and signed by 24,000 people, calls on the company to offer staff a “better” deal.

According to the union, Asda has issued staff who had not signed the contract with a leaflet offering advice on finding a new job. Those who have not signed it are currently serving a 12-week notice period.

The retailer claimed the introduction of contract 6 was “not a cost-cutting exercise” and said the contract asks employees to have “a level of flexibility that other retailers have had in their contracts for many years” to ensure it has “the right colleagues in the right place at the right time”.

Bringing retail staff onto contract 6 will also mean everybody doing the same job will be on the same contract, rather than the six different arrangements currently in place.

An Asda spokesperson said: “This contract is an investment of more than £80m and increases real pay for over 100,000 colleagues in return for a level of flexibility that ensures we are able to adapt to the demands of the highly competitive retail industry.

“We have consulted extensively with our colleagues, the GMB and our own national colleague representatives to discuss their concerns and to give reassurances that we will always help them to balance their responsibilities outside of work.

“We understand that change is never easy, but we are determined that Asda remains a sustainable business for its customers and colleagues – now and in the future.”

The spokesperson said Asda had made a number of changes to the original proposal in response to concerns raised by the GMB and employee representative groups, including minimising the impact of unpaid breaks and increasing the minimum notice period to ask colleagues to change department or working pattern to four weeks.

Gary Carter, GMB national officer, said: “Contract 6 is shocking – the changes are forcing our members to choose between looking after their families, or being able to support them. It’s a disgrace.

“Tens of thousands of members of the public are backing our Asda workers in their fight against these Draconian contracts.”