Trade Union Act 2016: employers should be aware of key changes 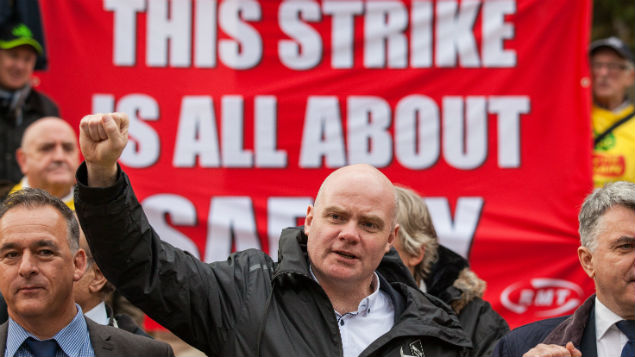 Steve Hedley, senior assistant general secretary of the RMT union at a protest in November 2016 against Southern Rail's plans to scrap guards on trains. Will new laws prevent strikes like this? Rob Pinney/LNP/REX/Shutterstock

The Trade Union Act 2016 is now law, but will it prevent strikes like those in recent months by staff at Southern Rail and London Underground or those by junior doctors? Nick Chronias outlines the new Regulations, areas of uncertainty and changes on the horizon.

The Trade Union Act was passed in May 2016. It was partly designed to address the perception that disruptive strikes were being called by unions despite low levels of support from members – especially in transport and other public services.

Regulations implementing central parts of the Act came into force on 1 March this year, and accompanying updated codes of practice and guidance are also being rolled out. This area does not stand still. There are already calls in Parliament and the Greater London Authority to make a union’s right to strike in transport and public services subject to a judge giving permission for it to proceed. This article looks at the key changes to be aware of now the Act is in force.

Information, notifications and expiry of the ballot mandate

Content of the ballot paper. The new rules require unions to include more detailed information on the ballot paper sent to members. This must now summarise the dispute in enough detail that members can understand what issues are unresolved, the action planned, and the period during which it is expected to take place. Any ballot sent to union members from 1 March 2017 must meet the requirements.

As unions are required to supply any affected employer with a copy of the ballot paper in advance, employers will be able to check the appropriate information is now included.

There are some interesting practical questions arising from these changes. For example, the duty to provide information about the nature of action short of a strike only relates to the voting paper. There is no similar change to the duty to give notice of the industrial action to the employer.

This means that if a union were to change its mind about the action, short of a strike, or indeed wanted to escalate the action short of a strike (for example from a “withdrawal of cooperation” to an overtime ban), it apparently has no duty to inform the employer of this. This seems to run contrary to the aim of this part of the Act which is to ensure the balloted employees and employer know what the dispute is about, exactly what action is being called for and when it will take place.

Notice of planned action. Where a union gives notice to an employer that industrial action is to take place, the required notice period is now extended to 14 days (or seven if agreed by union and employer).

Expiry of ballot authorisation. From 1 March, the authorisation for industrial action given by a “Yes” vote will have an expiry date. After six months from the date of the ballot (or up to nine months if agreed by union and employer) unions will have to re-ballot members to stage further action.

So, if voting papers are first sent to union members on 1 April 2017, they cannot authorise action taken beyond 1 October 2017. During this period the union will need to receive and count the ballots, notify the employer and eligible voters of the results, and give advance notice of the action to the employer.

Fifty per cent turnout requirement for all ballots. New measures to prevent unions taking action where only a minority of members have engaged with the ballot process (and the number voting for action is therefore an even smaller minority), are one of the central planks of the new Trade Union Act, and may bring about the biggest changes in practice.

Whereas in the past, a “Yes” vote by a majority of those union members returning ballots was sufficient to authorise industrial action, at least 50% of all those entitled to vote must now do so for any resulting action to be authorised.

So, if 500 union members are affected by a dispute, at least 250 of those will now need to vote in order for the ballot to be valid.

So, if 800 union members are affected by a dispute, the 50% turnout threshold will first need to be met by at least 400 members returning a ballot.

The next test will be whether or not the dispute is within an important public service and, therefore, also subject to the 40% threshold. If so, at least 320 (40%) of the 800 members will need to vote “Yes” to enable industrial action (again subject to no spoilt, or invalid ballot papers).

Private-sector union members in the fire, transport and border security services, and some limited health services, will be included in the threshold if they are delivering these services.

The existing rules on where unions may ballot more than one site together will continue to apply, but the new turnout thresholds will mean that where separate ballots are held, a union may not proceed with industrial action at any individual workplace where they have not all been met.

Where ballots do cover multiple sites, action will be lawful at any of the included workplaces if the thresholds are met in the aggregate.

Defining those eligible to vote is likely to become a matter of greater importance, and dispute under the new requirements, especially where important public services are involved. However, unions will still have a certain “margin for error”, as they are required to ballot those they reasonably believe are entitled to vote, and a similar test will apply to engagement in important public services.

It will be interesting to see how much impact these changes have in reality. The recent Southern Rail, junior doctor and London Underground strikes would all have met the 50% and 40% thresholds.

The Government has also produced practical guidance to accompany these Regulations.

Picketing supervisor. As a measure to tackle intimidation during strike action, it is now a requirement for a union to appoint a supervisor to oversee any picketing for picketing to qualify for protection. This will apply to picketing where notification is given to the employer from 1 March.

The appointed picket supervisor must:

The picket supervisor will be responsible for ensuring that the picketing is peaceful and complies with the code, and will be a visible point of contact for the employer and if necessary, police. Where two or more unions picket together, any one of those unions may appoint a supervisor. A revised code of practice on picketing has now been published, replacing previous versions and provides more detail on the requirements.

The 12-month transition period for changes to union political funds will begin on 1 March 2017, but will have little practical effect until a year later. Members joining after 1 March 2018 will need to opt in to make political contributions, and new funds set up after this date will also require opt-in. New guidance on political funds is now available to reflect the changes.

Unions must include detailed information about political expenditure when publishing returns for periods beginning after 1 March 2017.

From 1 March 2017, the Government will have the ability to regulate union facility time, and to make changes to “check off” provisions in the public sector, but no draft regulations have yet been published.

The Government announced an independent review of electronic voting for industrial action ballots in November 2016. The review must report to Parliament no later than December 2017.

There are many question marks arising from the Act, which will no doubt be played out in the courts. Those waiting at a train platform unable to get into work in the weeks to come may wonder if the Act will be the last word on industrial action.

Nick Chronias is a partner at DAC Beachcroft LLP.
View all posts by Nick Chronias →
Previous Article
Next Article