By Jo Faragher on 12 Jun 2014 in Employment law, Employment tribunals 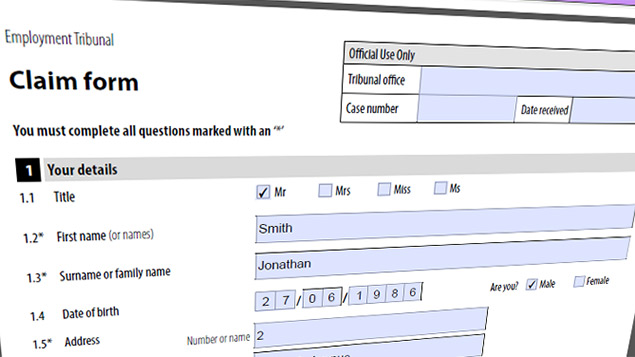 The number of individual claims taken to employment tribunal dropped by 59% in the first three months of this year, according to figures released by the Ministry of Justice (MoJ) today.

The fall echoes a similar drop in the previous quarter, which followed the introduction last summer of tribunal fees of up to £250 to lodge a claim and a further payment once the claim has been listed.

According to the MoJ, the number of claims lodged by individuals between January and March this year was 5,619.

However, Michael Reed, principal legal officer (employment) of the Free Representation Unit pointed out that there were distinct fluctuations in the numbers of different types of claims – for example, claims under the part-time workers regulations rose by 521% compared to the same period last year, he said.

The tribunal service also reports that it received 1,421 claims for sexual orientation discrimination between January and March, which represents an increase of 629% on the same period last year.

Earlier this week, a Government-commissioned survey of employees and employers who went through the tribunal system in 2013 found that 49% would be put off proceeding with a claim if they had to pay a fee.

Frances O’Grady, general secretary of the TUC, said: “In the past there were no fees, and workers who felt they’d been wronged could have their case heard and the tribunal would either find for them or in their employer’s favour. But last summer, the Government decided to restrict justice to those who could afford to pay a fee.

“Today’s figures show that many people – especially low-paid workers trying to claw back wages they are owed by their bosses – are being put off making a claim, often because the cost of going to a tribunal is more than the sum of their outstanding wages.

“The huge drop in cases taken certainly doesn’t mean that Britain’s bosses have got a whole lot nicer in the past year. It’s simply because pursuing a complaint against a bad employer has become too expensive for many workers, and that is just plain wrong.”

Glenn Hayes, employment law partner at law firm Irwin Mitchell, said: “There are a number of other factors in addition to the introduction of fees that could be influencing these numbers.

“Key reasons could include the increase to two years of the qualification period for unfair dismissal, the change to compensation on unfair dismissals, and employees trying to resolve their disputes in other ways.”

He also referred to the possibility that parties are looking to Acas’s free pre-claim conciliation service for advice, and that individuals could be using small claims courts to resolve disputes, because the fees are comparatively cheaper.