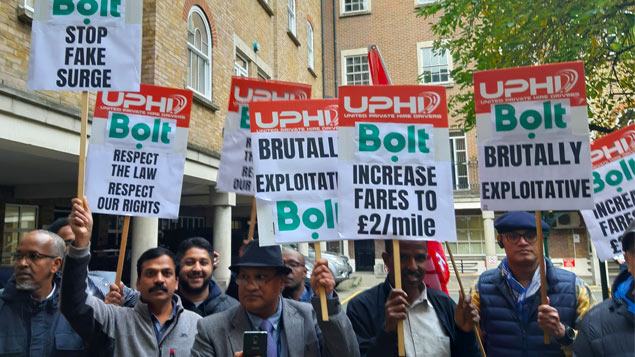 Bolt drivers stage a demonstration outside its head office in Shoreditch. Image: IWGB

Drivers for the minicab app Bolt have staged a protest against what they describe as “unfair” dismissals and its alleged failure to pay workers at least the minimum wage and holiday pay.

The drivers, who are members of the United Private Hire Drivers branch of gig-economy workers’ union the Independent Workers Union of Great Britain (IWGB), are seeking an increase in fares to £2 per mile (currently £1.25 in London) and for the company to recognise workers’ rights.

The union has also accused the firm of “unfairly” dismissing drivers. It said Bolt “manipulates” algorithms so that inflated prices are displayed in the app to encourage drivers to move into certain geographical areas, but when they arrive in those areas jobs are offered only at standard rates. Drivers are then obliged to accept these jobs or they face dismissal if they decline a job after it has been “dispatched” by the app, it said.

An IGWB spokesperson said drivers are often “not told why they have been dismissed nor will be given vague, synthetic or opaque reasons for the decision”.

The drivers held a demonstration outside its head office in London yesterday (29 October).

James Farrar, chair of UPHD branch, said: “Bolt management have been deaf to driver issues of pay, conditions and a rash of unfair, summary dismissals. But the practice of management manipulation through algorithmic bait and switch pricing has been the last straw pushing drivers to now take action.”

A Bolt spokesperson commented: “Driver pay and driver welfare are at the heart of Bolt’s business. This is why we charge up to 50% less commission than our competitors, which equates to 15% higher earnings for those using our platform.

“We pride ourselves on our personal approach to drivers and we will continue to ensure this conscientious attitude remains a cornerstone of the Bolt culture.”

Mohammad Onupom Rahman, a former Bolt driver and secretary of UPHD’s London branch, said: “Bolt treats drivers with utter disregard. I worked for Bolt but was unfairly deactivated without any investigation, appeal or chance to see evidence of any allegations against me.

“It’s high time Bolt made moves to live up to its claim to be an ethical cab company. It should start by respecting the worker rights of drivers such as myself. Until that time, drivers won’t be afraid to show Bolt’s dirty side to the world.”

IWGB has sought to ensure the all private hire drivers are recognised as “limb (b) workers” and has been involved in a number of cases against multiple operators, including a high-profile case against Uber. Last year the Court of Appeal ruled that Uber drivers are workers and not self-employed as the company had argued.