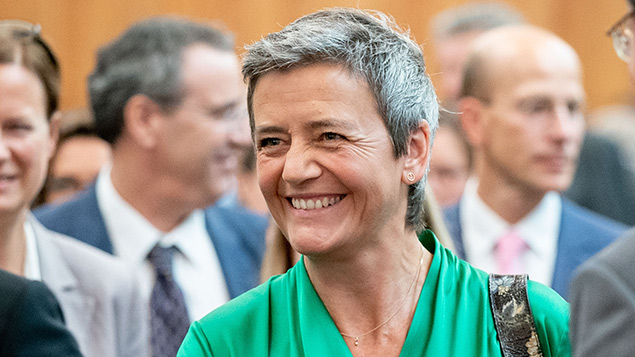 Margrethe Vestager said that EU competition regulations must not stop gig workers coming together to fight for better rights, in a reference to rules that effectively stop freelance workers colluding to fix prices.

“Platform workers should be able to team up, to defend their rights,” said the Danish politician. “The fact that their employers label those workers as ‘self-employed’ doesn’t make those collective agreements into cartels, when that label is just a way to disguise that they are really employees.

We believe that workers should have decent working conditions – and so, if it’s necessary, we can put regulations in place to protect platform workers” – Margrethe Vestager

“So we may need to make clear that nothing in the competition rules stops those platform workers from forming a union.”

Around one in 10 working-age adults in the UK – around five million people – work on gig economy platforms, for example Deliveroo or Uber, double the number who did so in 2016 and unions have warned that workers’ rights have not kept up.

Speaking at an event on sustainability and competition policy in Brussels, Vestager said it was important that companies understood the opportunities they had to work together without breaking the rules.

Vestager, whose EU antitrust role has seen her play a leading role in the imposition of  hefty fines for tech giants like Google, Apple and Microsoft, said that many businesses were “stepping up, and taking responsibility for providing decent conditions for the workers who make their products – even if they don’t directly employ those people.”

She added: “Our review of the rules and guidelines on horizontal co-operation could be another opportunity to explain how companies can put together sustainability agreements without harming competition.”

In the UK, the insecure nature of gig economy work has led to the emergence of new unions, such as the Independent Workers Union of Great Britain (IWGB). It has led a number of successful campaigns on the rights of self-employed workers such as Uber drivers and has lobbied for collective bargaining powers for outsourced workers.

“We won’t build a sustainable world just on the foundation of companies’ voluntary actions,” said Vestager. “But we don’t have to – because we also have the power, as a society, to put regulations in place that can make our economy more sustainable… We believe it’s important, for example to treat women and men equally – so we have rules on equal pay, instead of leaving it up to competition to prevent discrimination.

“We believe it’s important to protect our environment – so we have rules to control pollution. We believe that workers should have decent working conditions – and so, if it’s necessary, we can put regulations in place to protect platform workers.”

Last week, Labour’s Caroline Flint MP, after refusing to join the rebel alliance against the government’s latest Brexit proposals, told the House of Commons: “When it comes to workers’ rights, the EU isn’t God.”

She added: “The fact is local authorities up and down the UK have to outsource contracts to the European Union at the detriment of workers in their local communities.

“We have seen a rise of zero hours contracts and poor conditions partly because of that outsourcing.”

The Scottish National Party’s Ian Blackford rejected Flint’s point: “I would simply say to my right honourable friend that I would trust the European Union with workers’ rights before I would trust this Conservative government,” he said.

Vestager’s latest comments may well propel the debate into a new direction and add weight to arguments against Johnson’s deal on the basis of workers’ rights.