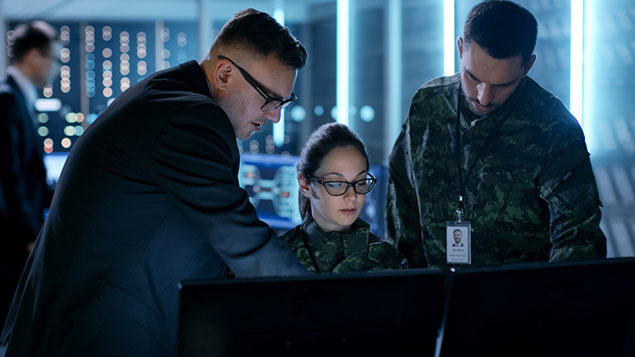 Recent research highlights how much companies could gain in fields such as cyber security from recruiting ex-armed services staff, writes Lee Holloway of the Officers’ Association. But employers’ perceptions of military personnel still get in the way.

After nearly 100 years of working with military officers to make the transition into civilian employment, the Officers‘ Association has consistently found that services personnel leave the armed forces with skill sets that are of huge commercial benefit to business. Former officers, in particular, have gone through one of the toughest recruitment and training programmes in the world. As a result, they are well equipped to tackle the management and leadership challenges in today’s economy.

Veterans Work, a collaborative research project led by the Officers’ Association, Deloitte and Forces in Mind Trust, sets out the compelling business case for hiring veterans: they are loyal employees, have a lower sickness absence than the wider workforce, perform well in a team and can work under pressure. They are also problem-solvers and ask the right questions, which is an asset in many roles. 90% of businesses which employ officer veterans say that they perform well in strategic management roles and the management and motivation of staff.

However, it can sometimes be a struggle for veterans to get started on a civilian career. The research has found that although 71% of employers said they would consider employing veterans, only 39% would employ someone with no industry experience. This means that organisations can sometimes overlook the abundance of skills and behaviours that service leavers bring to the workplace, skills which are often hard to find.

Many potential employers have misconceptions about the sort of behaviours that they might expect from former military service leavers. There is a prevalent belief that veterans will take a rigid approach to communications and working as part of a team, because of perceptions about how the armed forces operate. Our research demonstrates the opposite. Organisations actively recruiting veterans say they have strong oral and written communication skills, pointing to their training and work experience, often undertaken in  challenging circumstances. Adaptability is actually a key skill that people develop in the armed forces – service men and women often work in volatile situations under extreme pressure, so being flexible in their approach to managing situations is essential.

It is also the case that former military officers find it difficult at interview to find ways to present their particular skill set in a way that resonates with civilian employers. Few employers consider the full potential of military veterans. We already know, for example, that service leavers are unlikely to have the relevant industry experience. From our research, this puts service leavers at a disadvantage, with only 39% of employers stating they would consider people with no industry experience. This is an area where the Officers’ Association support service leavers looking for civilian employment – we work with them to make sure they are giving a fair account of themselves.

There is a prevalent belief that veterans will take a rigid approach to communications and working as part of a team, because of perceptions about how the armed forces operate”

What is apparent is that veterans do possess the critical skills and abilities that are being demanded by employers, it is just that they are not seen or recognised. Employers need to look beyond their pre-set hiring parameters to recruit people whom the evidence says are capable of adapting to new situations and learning quickly. Those organisations already working with providers of veteran support and recruitment services are more likely to recognise the potential of veterans in key areas such as leadership, communication, problem-solving and people skills.

Changing threats and pressures in the modern commercial world are also opening up a wide range of specialist opportunities. For example, the job title “crypto custodian” will be new to many people but it is a crucial role in the modern financial arena. Many who have served in the armed forces are already familiar with the protocols necessary for handling highly classified material and are well equipped for these roles.

As business faces skills and labour challenges in an increasingly digital and global economic landscape, the public awareness of and positive perception of veterans is at an all-time high. There has never been a better time to capitalise on the investment that has already been made in our service personnel.

BT is a leading recruiter of veterans and reservists in the UK. The company has an extensive military engagement programme to recruit for a broad range of roles in operations, network architecture, technical assurance, IP design, software engineering, and product and portfolio management.

One area of its business that is expanding is BT Security, which helps to protect businesses from the ever increasing risk of cyber-attack. Hugh Tatton-Brown is a former weapons engineering officer who joined BT after spending 12 years in the Royal Navy. Having specialised in cyber defence and information security, he delivered a programme to create an enhanced cyber defence team to protect BT from cyber attacks.

BT has recognised Hugh’s specialised skills and his ability to manage large teams to deliver demanding commercial programmes and he is now the chief information security officer for BT Defence.

It is not just at the specialist high end that BT recruits from the military. Between 2011 and 2015 it recruited 2,000 OpenReach engineers and specifically targeted service leavers to fill most of these roles.

As Mark Arscott, head of military engagement at BT states: “When looking at 1,700 veterans and comparing them like-for-like with other BT employees in identical positions, we’ve found that staff retention, promotions, disciplinary records and sick absence are all improved across our ex-military workforce.”

Will Orme’s 13-year military career included flying with the commando helicopter force and active service in Bosnia, Iraq and Afghanistan. He worked closely with the Officers’ Association to plan his transition into civilian employment. Will joined former officer networking groups and then helped to set one up in Manchester. Meanwhile, the board of a digital start-up company, planning their expansion, realised they needed a chief operating officer.

Will’s application was successful and on joining the team found he could draw extensively on his military experience. He said: “The business wanted someone who could cope with ambiguity, was resilient and was expecting to succeed. That was something I could bring. The military don’t expect you to fail. It is bred into you that you will not fail. That was a really useful mindset in the tech start-up world.”

The company has since grown from just four people to employing more than 60 and having a turnover of several million.