Congratulation leave? Unusual types of leave from around the world 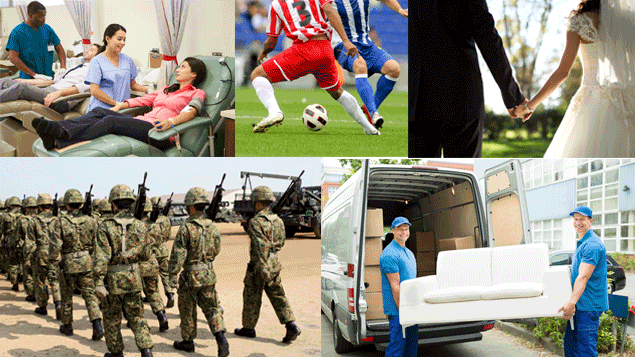 Anyone thinking that the UK’s upcoming grandparental leave is unnecessary meddling by law-makers should look beyond these shores at the numerous statutory types of leave – paid and unpaid – that employees can opt to take.

From time off to give blood, play sports and move house, to days’ allocation rising with age, paid annual leave policies vary greatly around the world. Claire Scullin highlights some of the more unusual forms of leave according to XpertHR’s international country guides.

Employees in Belgium can take one day’s annual leave for the first Holy Communion of a child. They are also entitled to up to five days (or whatever time necessary) for acting as an election officer. Private-sector employees are entitled to take sabbatical leave or reduce their working time under a system known as “time credits”.

As part of public policy to encourage marriage and childbirth later in life in China, legislation in some provinces, regions and municipalities provides extra paid wedding leave if the couple are over a certain age.

In Denmark, men between the ages of 18 and 30 are liable to be called up for national military or civil service, by ballot, while both men and women can volunteer for national service. The normal period of service is four months. Employees must be granted leave by the employer during national service and are protected against dismissal in respect of requesting or taking such leave.

In Brazil, meanwhile, men are obliged by law to enrol to perform 12 months’ military service after they reach the age of 18. They are considered to be on unpaid leave during this period and are protected from dismissal.

French employees with at least 36 months’ service with their employer and at least six years’ experience are entitled, every six years, to take unpaid sabbatical leave of six to 11 months, without having to specify a reason. Employees in France can also request a period of “secured voluntary mobility”, whereby their employment contract is suspended without pay and they go to work for another employer.

Those in Spain with at least 12 months’ service are entitled to take unpaid sabbatical leave of between four months and five years without having to specify a reason.

One of the most recent additions to the XpertHR International manual is a guide to India, where annual leave varies according to whether you are employed in factories, shops or commercial establishments. It also varies by state-specific legislation, although there is a general provision for a minimum entitlement of 12 to 21 days per year. Employees in some establishments are entitled to “casual leave” to cover sickness absence and other personal reasons.

Although not a legal requirement, it is common practice for employees in Japan to be offered “congratulation” leave on commencement of their marriage or the birth of a child, or “condolence leave”, to attend a funeral.

In an unusual provision, only employees that work for at least 80% of working days during a six-month period are entitled to be paid annual leave, and the minimum entitlement is just 10 days.

At the more generous end of the spectrum, employees in Puerto Rico are entitled to jury duty leave, witness leave, voting leave, driver’s licence leave, sport-related leave and municipal legislature members leave. However, federal legislation does not provide employees with any right to annual leave, either paid or unpaid, and employees are not entitled to take any annual leave until he or she has worked for the same employer for at least one year.

Running your own business

In a very unusual – and somewhat risky! – entitlement, employees in Sweden have the right to take six months’ leave in order to start or run their own business. Also, those who have a health condition that has reduced their work capacity for more than 90 days are entitled to unpaid leave to try out a new job with a different employer, with a right to return to their old job after the leave. Employees can also take unpaid leave in order to study, for as long as is necessary to achieve the objectives of the study.

In Finland, in a very charitable provision, employees can take “job-alternation” leave, whereby they take a sabbatical, and an unemployed person fills the vacant position. The employee receives an unemployment benefit for the period of leave, which has to last between 100 and 360 calendar days.

Russian employees who are blood donors can take a day’s paid leave to give blood or undergo related medical tests, and another day of paid leave on the day after donating. The post-donation day of leave may, at the employee’s request, be added to the employee’s annual leave or taken at some other time.

In Bulgaria, employees can also take two working days’ leave for this purpose, while there are provisions in place in Argentina and Brazil for employees to receive one day off. In Hungary, employees are entitled to receive “absence pay” for giving blood.

In Canada, employees in Manitoba, Ontario, Quebec and Saskatchewan can take unpaid leave for donating an organ, which varies from 13 to 26 weeks.

Finally, still in Canada, in a slightly sombre provision, in the federal jurisdiction, Manitoba, Newfoundland and Labrador, Nova Scotia, Ontario, Quebec, Saskatchewan and Yukon, employees are entitled to an unpaid leave of absence for up to 52 weeks if their child has disappeared.