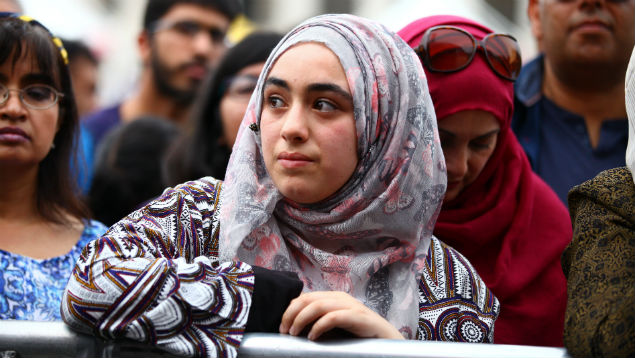 Celebrating the end of Ramadan at Trafalgar Square, London, 2016. Bans on dress codes at work have brought about controversial legal cases. Dinendra Haria/REX/Shutterstock

The requirement to speak English at work and dress codes at work are policy areas where employers should tread carefully to avoid discrimination. Deborah Bulman, a senior associate from Burges Salmon LLP, considers recent legal controversies and gives tips on drafting employment policies.

While many workplace policies come as standard, many businesses will have particular requirements they want to encompass which may stray beyond the usual. When doing so, employers need to be careful as policies that apply equally to all employees may disadvantage certain nationalities and religions.

Requirement to speak English at work

A common question employers ask is whether they can require their employees to speak only English while at work.

More on dress codes and race and religious discrimination

Many organisations employ staff for whom English is not their first language and when employees share a common language which is not English and wish to speak to their colleagues in their native language, this can cause problems.

As language is an intrinsic part of a person’s nationality, a requirement that workers do not speak in their native language while at work could amount to direct race discrimination.

A race discrimination claim succeeded in the case of Jurga v Lavendale Montessori Ltd, in part, because Polish-speaking employees were reprimanded for speaking Polish to each other in their breaks while Italian colleagues were able to speak Italian during breaks without objection.

Equally, in the 2012 case of Dziedziak v Future Electronics Ltd, the Employment Appeal Tribunal (EAT) found that an instruction given by a manager to an employee not to speak in her own language (Polish) at work was direct race discrimination on the grounds of her nationality.

That said, it is possible to limit the use of languages other than English at work, provided that the policy applies to all nationalities and the employer has justifiable (and non-discriminatory) reasons for imposing the policy.

The case of Kelly v Covance Laboratories Ltd involved an employer that carried out animal testing. The EAT accepted that the employer’s security requirements (employees had previously been subject to assaults from animal activists) meant it was reasonable to ask a new employee, who was behaving suspiciously by making lengthy and frequent phone calls in Russian in the lavatories, not to speak in her native language so the supervisors could understand what was being said.

Kelly can be distinguished from Dziedziak because, in the former case, the employer’s request of the employee not to speak Russian was not because of her nationality but was because of genuine security concerns.

In Dziedziak, the employer gave no reasonable explanation for its request for the employee not to speak Polish and so the tribunal was satisfied that the instruction was based on the employee’s nationality and was, therefore, discriminatory.

Under the Immigration Act 2016, there will be a new duty for public authorities to ensure their workers in customer-facing roles speak fluent English. In determining how to comply with this duty, public authorities will be expected to follow a statutory code of practice, which is expected to come into force in October 2016.

The code of practice will outline the minimum standard of spoken English to be met, the action to be taken where someone does not meet that standard, the procedure to be operated to deal with any complaints and how the public authority can comply with its other duties, including its obligations under the Equality Act 2010.

Employers that want to have a workplace language policy should specify that English is the language of operation for their business (rather than specifying a requirement not to speak any particular language) and should make sure the policy is applied equally across all nationalities.

Employers should also ensure the policy can be justified with a genuine business reason; for example, health and safety purposes, security requirements or business efficacy, and that it applies only in relation to the actual work being performed by employees.

Bear in mind, for example, that a requirement for employees to speak only English during break times will be difficult to justify.

Another more commonplace workplace policy that has been grabbing the headlines recently is the dress code; seemingly innocuous but, in reality, peppered with risk when it comes to the potential for religious discrimination.

In the UK, the cases have tended to focus on claims of indirect discrimination. For example, in 2015 in the case of Begum v Pedagogy Auras UK Ltd, the employer’s uniform policy required that any garment worn should not present a trip hazard.

The claimant, a Muslim woman, brought a claim for discrimination on grounds of religion or belief after she was asked to wear a shorter jilbab (a garment which covers the body from neck to ankle).

The EAT found that the uniform policy did not indirectly discriminate against Muslim women because the jilbab was permitted, even at full length, provided that it did not constitute a trip hazard, and all other Muslim women in that workplace could comply with the requirement. Further, if it did put Muslim women at a disadvantage, it was justified on health and safety grounds.

Equally, in the 2007 case of Azmi v Kirklees Metropolitan Borough Council, the EAT held that the employer did not unlawfully discriminate against a teaching support worker on the grounds of religion or belief by refusing to allow her to wear a full-face veil in the classroom.

However, two recent cases before the European Court of Justice (ECJ) involving bans on employees wearing religious symbols at work have concerned claims of direct religious discrimination. While the ECJ has yet to decide in either case, the cases have been considered by two different attorney generals who have given conflicting opinions despite a close similarity on facts.

In Achbita v G4S Secure Solutions, Advocate General Kokott was of the opinion that a private company’s ban on employees wearing religious, political or philosophical symbols while on duty, which led to the dismissal of an employee for wearing an Islamic headscarf, did not amount to direct discrimination as the policy applied to all employees equally.

She also found that an employee could be expected to moderate the exercise of their religion in the workplace (for example by choosing not to wear a headscarf) in a way that was not possible for other protected characteristics, such as sex, gender or skin colour.

The Advocate General said that, even if direct discrimination was established, the ban could be justified as a genuine and determining occupational requirement in so far as it was proportionate to require compliance with a dress code that gave effect to the employer’s strict policy of neutrality.

However, in the case of Bougnaoui and another v Micropole SA, Advocate General Sharpston rejected the distinction between religious belief and the expression of that belief and delivered an opinion that such a ban is unlawful direct discrimination on the grounds of religion or belief and would only be lawful if it was based on a genuine occupational requirement which would be limited to matters absolutely necessary to undertake the professional activity in question, for example, health and safety reasons.

The ECJ decisions are expected at the end of the year. If the Court takes the significant step of deciding that certain manifestations of faith are inseparable from the faith itself then a dress code that interferes with this will be directly discriminatory.

This, in turn, will mean that employers should expect to revisit all policies (not just dress codes) that potentially impact differently on different religions or nationalities to ensure they are not inadvertently discriminatory.