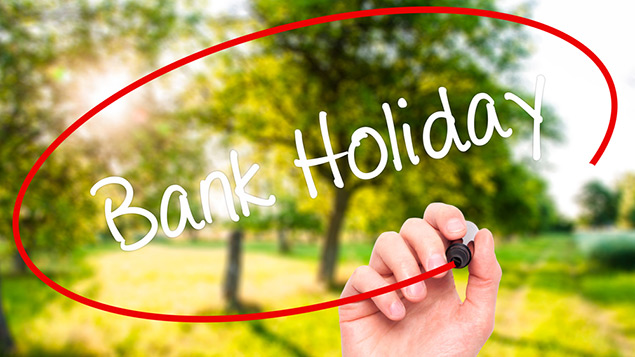 Some employees are set to suffer a breach of their annual leave rights as a result of the way that Easter bank holidays fall this year and how they fall next year.

How to manage bank holidays

The wording in some employees’ contracts may result in an unanticipated shortfall in their holiday entitlement, for which their employer will be liable, as a result of variations in Easter dates.

The issue will affect employers that operate an annual leave year that runs from 1 April to 31 March, and that set out their employees’ paid annual leave entitlement using wording along the lines of “20 days’ holiday plus bank holidays”.

Under working time rules, employees are entitled to a minimum of 5.6 weeks’ annual leave. This equates to 28 days’ leave per year for employees working a five-day week. The 28 days can include bank holidays, of which there are usually eight per year.

These are the England and Wales bank holidays. Some Scotland and Northern Ireland dates may differ.

This means that two Easter breaks fall within a holiday year running from 1 April 2015 to 31 March 2016: the Easter break that fell early in April 2015, and the Easter break falling in late March 2016. Affected employees will gain from two additional bank holidays (on top of the usual eight) for the leave year.

Failure to honour a contractual clause providing for “20 days’ holiday plus bank holidays” would result in the employer being in breach of contract, regardless of the fact that there are more than the usual number of bank holidays.

For a holiday year running 1 April 2016 to 31 March 2017, employees would appear to lose out. There is no Easter break during the whole of the annual leave year, meaning that they will be entitled under their contract to just 26 days’ leave.

XpertHR senior employment law editor Clio Springer explains: “Employers cannot rely on a bonus in holiday entitlement from one leave year to be ‘evened up’ by giving employees less than the statutory minimum in the next leave year.

“The 28-day entitlement is a statutory minimum and the employer cannot negotiate out of it, other than by an agreement with the workforce to carry forward up to eight days’ holiday into the following leave year.”

Springer warns: “Employers in this position will need to top up employee’s holiday entitlement for the leave year running 1 April 2016 to 31 March 2017, to ensure that employees retain their 28-day statutory entitlement.

“Employers in this situation are left with the option of either bearing the cost of additional paid holiday for the 2015/16 leave year or negotiating with their employees to agree a variation to the terms of the contract to the effect of ’20 days’ holiday plus eight bank holidays only’ in relation to 2015/16.

“An employer that imposes a change without agreement will be in breach of contract.”

This article has been updated since its original publication in April 2015.
Previous Article
Next Article