UK employees take a more lenient approach than the European average to questionable workplace behaviour but are more likely to blow the whistle if they are aware of misconduct, according to research into employees’ experiences of ethics.

The Institute of Business Ethics (IBE) survey asked employees whether or not they considered nine work-related scenarios acceptable. Throwing a sickie, minor fiddling of travel expenses and claiming personal entertainment on expenses were considered the most unacceptable practices in the UK, but a higher proportion of UK respondents said these practices were acceptable compared to the European average.

IBE director Philippa Foster Back said: “Although some of these issues may seem trivial, respondents’ answers are an important indicator of changes in acceptability of practices, as well as where employees’ ethical boundaries lie. Employees either ignoring or being unable to identify the ethical dimensions of a specific situation increases the ethics risk for organisations.”

Ethics in the workplace

One issue – making personal phone calls from work – is now considered acceptable by more than half of UK respondents (53%), compared to 47% for the European average.

The Ethics at Work survey, first conducted in 2005, asks employees how they experience ethical dilemmas in their day-to-day working lives. It looks at whether they have witnessed misconduct; whether they have reported it; and what stops them reporting ethical violations.

“Although we see this increase in pressure across other countries surveyed, this is particularly relevant to the UK as we are about to enter a period of uncertainty regarding Brexit,” explained Foster Back. “Employees are under more stress to deliver than ever before, and this is increasing the pressure to then cut ethical corners. These figures should be seen as a warning sign to organisations that they need to be more supportive of their employees when it comes to making ethical decisions.”

Another pressure, “being asked to take shortcuts”, was cited by 26% of UK respondents who felt under pressure, compared to 17% across Europe. 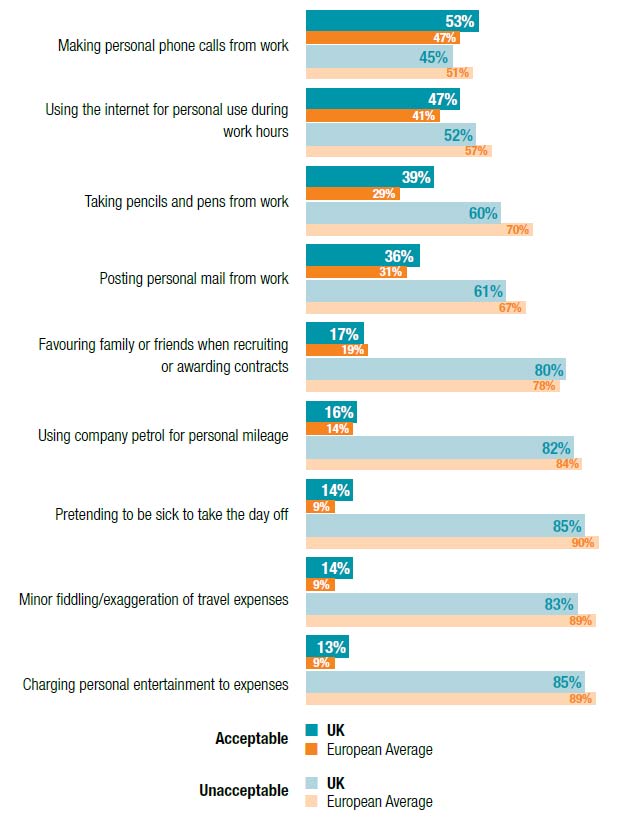 Acceptability of common workplace practices in the UK compared to the European average (Graphic: IBE)

Asked which type of misconduct they were aware of, UK employees cited the following:

“Global movements like #metoo and #timesup are having ramifications throughout the workplace,” added Foster Back, “not just in terms of people speaking up about harassment, but in feeling empowered to raise concerns about other issues. We hope that this is the beginning of speaking up being seen as business as usual.”

Interesting research by the IBE. In 2016 South Africa also had 1 in 4 employees observing misconduct (as in the UK) but only 48% of them reported it Ã¢â‚¬â€œ compared to UKÃ¢â‚¬â„¢s 67%. We are more on par with EuropeÃ¢â‚¬â„¢s 54% who raised their concerns. Interesting given the history of Europe and that of SA.

How should employers handle whistleblowing complaints?

The importance of being an ethical leader and...

McDonald’s and Coca-Cola to halt operations in Russia