Staff and freelancers at Google offices across the world are walking out in protest of the tech giant’s treatment of women. The walkouts are taking place at 11:10am local time, with the first one in Tokyo.

Workers are leaving a note on their desks that reads: “I’m not at my desk because I’m walking out with other Googlers and contractors to protest sexual harassment, misconduct, lack of transparency, and a workplace culture that’s not working for everyone.”

Google’s famous for its culture. But in reality, we’re not even meeting the basics of respect, justice and fairness for every single person here” – Clare Stapleton, YouTube

Disquiet among women at Google has been brewing for years and came to a head last month when it was alleged that the creator of the Android operating system, Andy Rubin, received a $90m payout, following sexual misconduct claims. Rubin denies both the claims and the size of the settlement.

Clare Stapleton, product marketing manager at YouTube, has helped organise the walk-out. She told the New York Times: “We don’t want to feel that we’re unequal or we’re not respected any more.

“Google’s famous for its culture. But in reality, we’re not even meeting the basics of respect, justice and fairness for every single person here.” 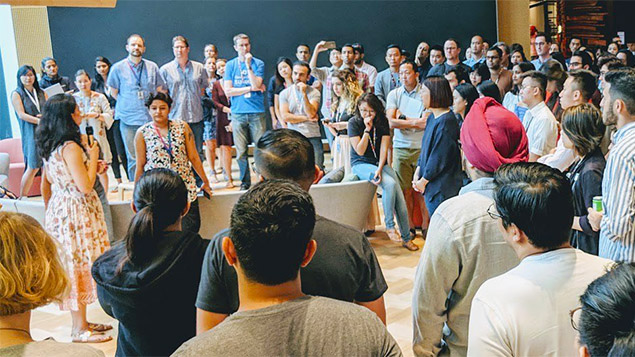 This week, Richard DeVaul, an executive at Google’s X research lab, resigned amid claims he made unwanted advances towards a female job candidate. DeVaul has not commented but has previously described the incident as an “error of judgement”.

The protestors are demanding an end to “forced arbitration” in cases of harassment and discrimination for all current and future employees. In the event of an employment dispute in some countries like the US, forced arbitration obliges an employee to follow the organisation’s arbitration procedure, rather than taking their complaint to court.

The “flawed” diversity agenda at Google

They also want a commitment to end inequality around pay and career opportunities; a publicly disclosed sexual harassment transparency report; and a clear, globally inclusive process for reporting sexual misconduct safely and anonymously.

The chief diversity officer should answer directly to the CEO, and make recommendations directly to the board of directors, according to the demands, and an employee representative should sit on the board.

Many thousands of workers are expected to participate in the protest.

In an email to all staff, Google chief executive Sundar Pichai said: “I understand the anger and disappointment that many of you feel.

“I feel it as well, and I am fully committed to making progress on an issue that has persisted for far too long in our society… and, yes, here at Google, too.”

He also apologised for the company’s past actions. In a letter to staff last week Google said it had dismissed 48 people – including 13 senior managers – over claims of sexual harassment in the past two years.

How firms need to comply with sponsor licence...