The gap between male and female graduate pay has continued to widen, with men earning 15% more than women five years after completing their degrees.

Government data for the employment and earnings outcomes for graduates, published a week before the deadline for this year’s gender pay gap reporting round, suggests that the graduate gender pay gap has widened for three consecutive years.

However, women were more likely to be in employment or continue studying five years after finishing their undergraduate degree than men (86% compared with 83.9%).

The report suggests that the gap is partly caused by women being more likely than men to take a part-time role or stay in higher education for longer.

“Today’s statistics should be a wake-up call for anyone who cares about gender equality,” Joe Levenson, a spokesman for the charity Young Women’s Trust. “While the impact of having children is often said to be a cause of lower pay for women as they get older, the new graduate pay gap happens before most people start a family.”

Tara O’Sullivan, CMO at Skillsoft, said that women needed to get better at negotiating their salaries, “Often, when men are offered a job there will be a back and forth on pay, holiday and other benefits. Women tend to simply accept offers, because of absurd notions about being too pushy and outspoken.

“Employers will value a demonstration of your negotiation skills; in many job roles – from sales to marketing and engineering –negotiation is very important,” she added.

Universities minister Chris Skidmore said that it is vital that higher education “carries on delivering for students, the taxpayer and the economy”. 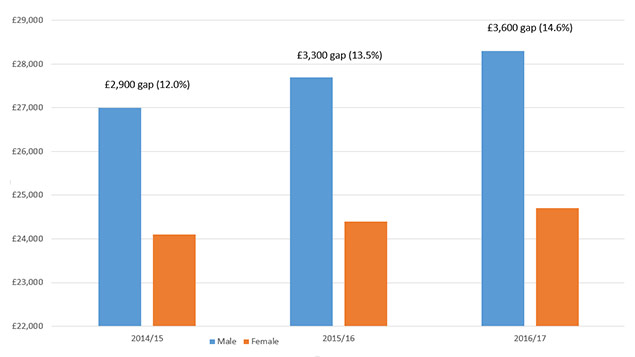 Maybe a gender analysis of degree courses, and the likely earning potential in future careers based on those degrees, would help.

If money is your thing, there isn’t much point in doing a degree where future earning potentilal is limited due to lack of demand for your skills.

Half yet to publish as gender pay gap...