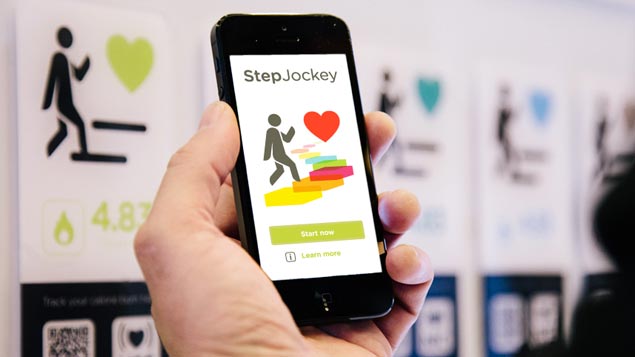 Employees can record how many stairs they take on their phone.

Encouraging staff to take the stairs rather than the lift can feel like a fruitless exercise. But a new competition-based approach could get employees moving, as Legal & General (L&G) has found.

According to the American Council on Exercise (ACE), you can burn more calories running up and down the stairs than by jogging or cycling on the flat.


The idea was to give people who don’t like exercise or couldn’t see how to incorporate it into their day an easy way to do so. But it was the competitive element that really made the difference.” – Alyson Bowcott, Legal & General

But could it have a broader impact on employee wellbeing? Financial services company L&G believes so, having adopted a new “gamified” approach in its four biggest offices that encourages employees to compete with each other to climb the most stairs.

The idea for stair-running came from StepJockey, a UK-based start-up that was initially seed-funded by the Department of Health, which launched its gamification system at the end of last year.

The move is part of a broader health and wellbeing programme at L&G that was initiated in 2012, called “My money, My life, My health”.

StepJockey comes in to employers’ offices and measures stairs to calculate how many calories can be burned off per stair.

Employees download an app to their mobile phone, and can then “swipe” signs at the top and bottom of each staircase to record their journey.

There are various different challenges on offer – employees can “climb Everest” (as L&G has suggested) or conquer the Great Wall of China or the Empire State Building, among others. They can also organise themselves into teams and compete.

As people chase up and down stairs, the StepJockey app collects a range of anonymised data, which the organisation can use to gain insights such as which age groups use the stairs, or how offering incentives impacts employees’ willingness to walk rather than use the lift.

When the signs were introduced at L&G in September last year, stair-running rose by between 20% and 50%, depending on the site.

But when the Everest challenge was launched in February this year, activity soared by more than 3,710%,  meaning staff burned more than 56,000 calories in just over four weeks.

To increase the incentive further still, teams that scaled the most steps in the quickest amount of time were awarded prizes in the form of vouchers for high-street stores.

Alyson Bowcott, L&G’s PR manager who is in charge of the project, explains: “The idea was to give people who don’t like exercise or couldn’t see how to incorporate it into their day an easy way to do so. But it was the competitive element that really made the difference.”

An unexpected benefit of the scheme has been the positive impact it has had on staff relations.

“People in the teams will often have lunch together and so it’s been a really good way of encouraging bonding,” Bowcott says.

“The more naturally athletic ones encourage the others to do more so it’s a nice way to get people working together positively and having a bit of fun.”

The challenge now will be how to keep the impetus going. And human nature being what it is, that could prove the biggest test of all.