Like many organisations Severn Trent Water is gradually moving from crisis management into a new business as usual. Personnel Today spoke to group HR director Neil Morrison about how the role of HR is evolving and the need for organisations to do right by their people in the coming months.

Speaking from Severn Trent Water’s office in Coventry, group HR director Neil Morrison has just encountered a potential challenge thrown up by the coronavirus. A number of employees live or work in Leicester – where there has been a localised lockdown due to a spike in cases – and the organisation is trying to ensure the utility can still run smoothly.

Responding to challenges such as this has been a feature for Morrison and his team (and countless other HR professionals) since early March. “We were already putting in plans for how we would deal with working in the event of coronavirus. What changed was that the situation escalated quicker,” he says. “But we were pretty well prepared and able to communicate to colleagues what our working practices would be.”

Coronavirus: Promoting employee engagement as the lockdown is lifted

Around half of the workforce were classed as key workers and kept going to sites to work on operations and maintenance, while the other half moved to home-working. Most of the around 100-strong HR team also shifted to working remotely, although a number of training staff needed to work on sites to ensure essential workers completed mandatory training.

With government messaging changing daily in the first weeks of the pandemic, HR’s response at this time was more reactive than it is now. “We had letters going out to key workers so they could show if they were asked, signage in vehicles or for people working in the streets to explain that they were key workers … right through to providing a wrist support for a colleague who’s working at home but doesn’t have the correct setup. We were having to respond and iterate our plans while now we have a bank of knowledge and data we build into our ongoing management.” 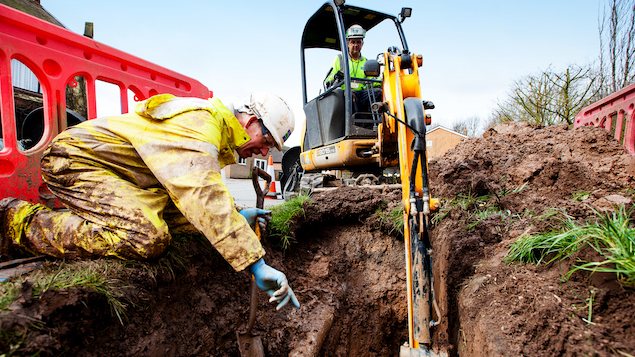 “Another challenge was how we supported vulnerable colleagues,” he adds. “So when it started to become clear that certain conditions led people to be considered more vulnerable, we put in place a system to provide individualised care plans for each of those people and to make sure that they felt that they were able to discuss this. They could come to us with concerns and fears but also know that we were adequately protecting them.”

The company made a decision not to place any employees on furlough. “We very much believe that there are other organisations who would benefit more from the government money,” says Morrison. “And the intention of that scheme was really to support those businesses that are most under pressure because of the pandemic.”

The next few months will see the HR team building new working practices honed during the pandemic into business as usual – embedding social distancing, moving back into buildings or working out how people travel between locations or work together in shifts. He adds: “I think it’s probably fair to say that in the first part of the pandemic, it became a kind of a reactive management of the situation. We’re now moving into a longer term operation that looks at how we run the business, accepting that this could be continuing for a year, two years or longer.”

He believes that the coming months will reveal the extent to which employers sustain their empathy for the workforce. “One of the things that I found fascinating is that no individual has experienced the pandemic in the same way as another individual. What we’ve seen in how we’ve supported employees is that we’ve had to focus very much on the individual rather than the collective,” he says. “All of that has played into the way that we think about the workforce and perhaps has brought inclusion into light in a different way.”

“I think there’s also an element of social purpose or fairness that will come from this,” he adds. “People will ask ‘are you making large scale redundancies? Have you taken money from the government?’. Investors are already looking at organisations and asking how they behaved during this time – how they showed up for broader society. Ultimately this could be a force for good if harnessed in the right way.”

In this vein, Severn Trent will continue to recruit apprentices and run work experience this year, with 50% of the apprenticeship intake coming from social mobility ‘cold spots’. Young people, argues Morrison, are likely to be “one of the biggest groups of losers” in this pandemic, so it’s important to support them. “We’re shifting our work experience programmes to be virtual online programmes. We’re still taking on our apprentices. We’re talking to the government about how we might be able to take on more,” he says. Around 88% of employees at the company live in the communities it serves. “It’s really important that we continue to do that and invest back into those communities, many of whom are going to be struggling economically and financially.”

One of the things that I found fascinating is that no individual has experienced the pandemic in the same way as another individual.”

And while many employers have been forced to introduce pay cuts, Severn Trent has just agreed a three-year pay deal of 2.3%, while executive reward was reduced. “We recognise that some employees will have partners who might be in industries where they’ll lose their jobs, or might have been furloughed. And we wanted to commit to a longer term increase, to be able to say that don’t don’t worry about your earnings during this period of time,” he says. “It was about giving that psychological safety – saying we’re not going to make any redundancies, we’re not going to furlough you and we’re committed to a three year increase and bonus.”

Morrison has been in the role at Severn Trent for three years now, having spent nine years at Penguin Random House, where he played a major role in the publisher’s merger in 2013. While the operations of the two businesses are wildly different, there are still similarities, he says: “The organisations are similar in that they both have a very strong sense of purpose. They’re both very clear around wanting to show up in society in the way in which they operate. And they’re both full of people who really care about what they do and think what they do matters.”

The HR teams that will thrive as we emerge from the Covid-19 crisis, he concludes, are those that have shown empathy and authenticity, but also flexibility. “I think it comes back to the need to recognise that while we are back to business as usual, the environment has changed slightly. So we need to adopt a mindset of ‘how do I do this now’ rather than ‘I can’t do this’. We ran our AGM online, we’re consulting with trade unions virtually,” he says. “We’ve been able to lead people through uncertainty and that will be the case across every organisation – the need to be able to operate in ambiguity.”

Does STW have satellite offices in the region’s or just the main head office?

‘Inequality is embedded in our labour market’ says...

More than £1bn of upskilling loan money has...

Monkeypox advice for employers: working from home and...